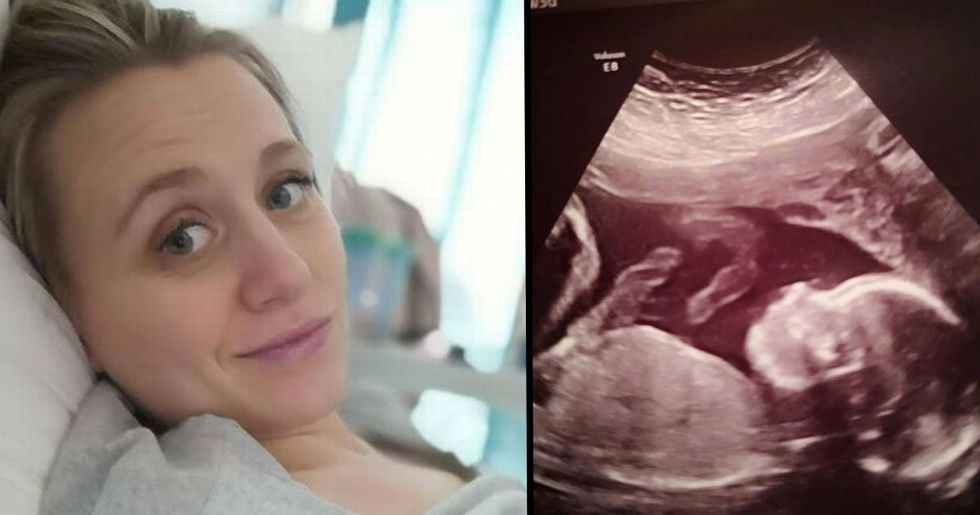 Every so often, you hear a medical story which truly makes you think 'wow, we are living in the future.' And a particularly incredible example of this happened in the UK this week.

A pregnant woman's scan revealed her unborn child to have a condition called spina bifida. It's a condition effecting a baby's spinal cord, and can leave a sufferer unable to walk. After first being given the option to terminate her pregnancy, doctors offered the mother a new and unusual option, called fetal surgery.

The procedure, in which the baby is operated on before being returned to the womb for the remainder of the pregnancy, had so far only been carried out in Belgium. But given the opportunity to save their child's life before they were even born, these parents thought they had to go for it. The innovative procedure was carried out University College Hospital Great Ormond Street Hospital in London, with this procedure being only the fourth to go ahead in the UK.

A pregnancy is a pretty magical thing.

Think about it - a woman grows a whole new life inside her, basically converting food into a human being, If it was in a sci-fi film, you'd think it was a little far-fetched.

Although from common parlance this "miracle" can involve a lot more insomnia, vomiting, aches and pains than you may expect.

That is to say, pregnancy is rarely a walk in the park.

Alongside the physical act of creating life, there are a ton of extra, external pressures that can come alongside expecting.

Telling people, for instance, can be no piece of cake.

Plus, pregnancy (and parenthood) can be hugely stressful, expensive, and anxiety-inducing. It's certainly not for the faint of heart.

But there's another aspect of pregnancy-stress which eclipses the rest.

The idea that your baby may be unhealthy or require medical intervention can seem like a total nightmare for expectant mothers (and, indeed, fathers).

Medical advancements can be truly incredible these days.

But it still doesn't make the idea of potential risks to your unborn child feel any easier for those experiencing it.

All expecting parents want is a happy, healthy baby.

The idea of anything standing in the way of that can be horrifically scary, even in the wake of new and innovative treatments.

Such was the reality faced by one expectant mother.

This is Bethany Simpson. She's a twenty-six year old mum-to-be, and lives in Essex, in the UK. She's currently expecting a baby, due in April of this year.

But Simpson's pregnancy wasn't as straightforward as she'd hoped.

During a routine twenty-week scan, results showed that Simpson's baby was not developing as it should be. The child's head was shown to be not at the right size.

Her unborn child had a condition known as spina bifida. It's a birth defect in which the backbone and spinal membranes don't fully form over the spinal cord.

Many are permanent unable to walk, plus face significantly decreased life expectancy. It wasn't what Simpson had hoped for for her child.

Simpson and her husband were given some options.

Simpson told the Daily Mirror, "With that we were told our little girl had spina bifida. We were offered continuing pregnancy, ending pregnancy or a new option called fetal surgery - fixing her before she is born. We had to do it. We also had to meet some seriously strict criteria."

When Simpson was told about it, it had only been successfully performed in Belgium. The most skilled surgeons from across Europe were called upon to help with the operation.

Preparing and undergoing the operation was anything but easy.

"Baby and I went through amniotic fluid tests, MRIs and relentless scans." Simpson shared with the Daily Mirror. "We got approved and we planned for surgery. Our lives were such a rollercoaster for the next few weeks."

It took place at University College Hospital Great Ormond Street Hospital in London, with some of the leading surgeons from both the UK and Belgium operating.

But the expertise of the doctors involved help to put her more at ease. She shared, "I had the most recognised surgeons from around the world from University College London Hospital and Belgium looking after me."

In it, the baby is removed from the womb, then operated on to fix the spinal cord, and finally returned to the womb for the remainder of the pregnancy.

Simpson did not want to end her pregnancy, as was thrilled there was another option.

"Sadly 80% of babies in England are terminated when their parents get told their baby has this condition. It's not a death sentence. She has the same potential as every one of us," she's said.

"I feel our baby kick me day in and day out, that's never changed." Simpson says. "She's extra special, she's part of history and our daughter has shown just how much she deserves this life."

The baby, who's a girl, is now safely back in Simpson's womb, where she'll remain until her birth in April this year.

Simpson is glad to have had support through this trying time.

Alongside her mother, pictured earlier, Simpson was joined in hospital by her husband and the father of her baby, whose name is Kieron.

This story is truly incredible.

In a world that so often dominated by bad news, it's amazing to hear a story with a happy ending - especially one so important to many people's lives.

The internet had a similarly positive reaction.

The fact that both mother and child are now totally healthy goes to show what an amazing service the NHS provides in the UK.

Although some have co-opted the message.

Some pro-life groups are taking the story as a parable about how unnecessary abortion is - which just isn't what this story is about at all!

This is simply a story of amazing medical advancement.

We should be celebrating the hard work and innovation that allowed this procedure to take place safely and successfully - rather than using it as a tool to beat down and oppress other women.

Simpson has found another message in the story.

She's using her experience to raise awareness of (and money for) spina bifida charities around the UK.

She's already raised over £500 for the cause - and you can donate to her chosen charity through their Facebook page, here.

We're just thrilled for the Simpson parents, and the unborn baby whose quality of life has been so improved. This is the kind of human achievement we should celebrate!
20%

$16.19 $12.95
Buy Now
See More Deals
We hope you find these deals as awesome as we do! Just an FYI: we may receive a share of sales from links on this page