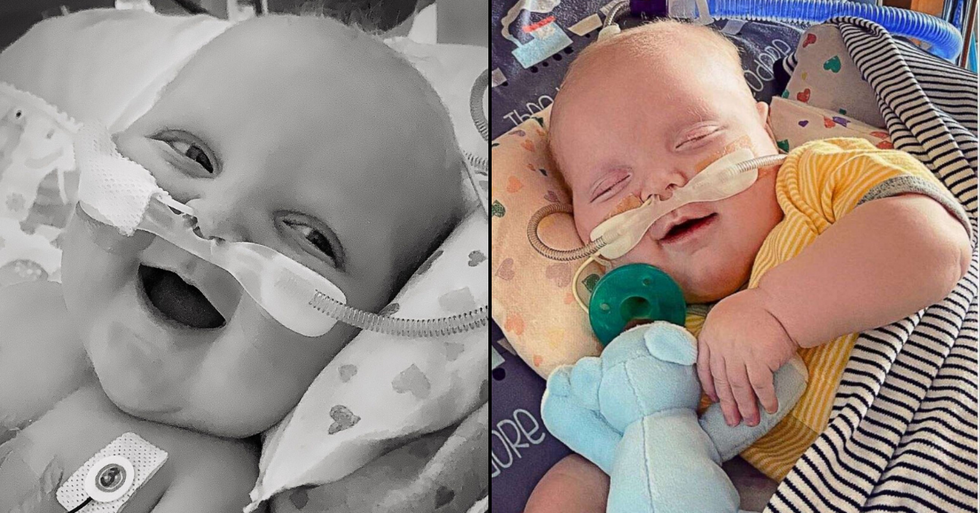 Every baby born is a special baby.

Babies make their arrivals in a whole range of different ways but these aren't always the easiest of journeys.

Make sure to keep scrolling to learn about the beautiful baby who managed to smile despite having 2 open-heart surgeries...

Some babies prefer to make a speedy entrance into the world, leaving some moms with no choice but to give birth in the traffic en route to the hospital.

And some babies prefer the longer route out...

Leaving their poor moms in labor that could last for days.

But not births are smooth sailing...

And many babies are born with various health issues, with some sadly being life-threatening.

One worried mom and dad recently experienced this...

But their new bundle of joy didn't let his traumatic arrival dampen his mood.

This is Michael and Alexandria Nelson...

They already have their 4-year-old daughter, MacKenna, and they welcomed their baby boy into the world on August 30th last year - Theodore.

But little Theodore didn't have the easiest start to life...

Theo, who often goes by Teddy, was born with a congenital heart defect called hypoplastic left heart syndrome. Teddy had his first open-heart surgery just fifteen minutes after his birth.

And in November, the little one had to undergo yet another open-heart surgery.

But remarkably after his second surgery...

Teddy managed to squeeze a smile for his worried mom and dad.

The worries parents weren't sure if this smile was a coincidence or not...

"Around the second open-heart surgery, he suffered a stroke," Alexandria told Good Morning America. "We weren't sure the connections were there in the brain to allow a smile to show on his face. It really gave a huge glimmer of hope for the future that he's able to overcome these obstacles."

But his beautiful smile gave them hope...

"His sister was in the room; [Teddy] loves to hear her voice and my husband, he has the special touch," she went on to say.

Teddy's third surgery is scheduled in a few weeks...

But after this surgery, it is hoped that he will be able to go home for the first time.

We hope and pray for Teddy's successful surgery!

In the meantime, make sure to keep scrolling to learn about the baby girl who greeted her dad with a beaming smile just seconds after being born...