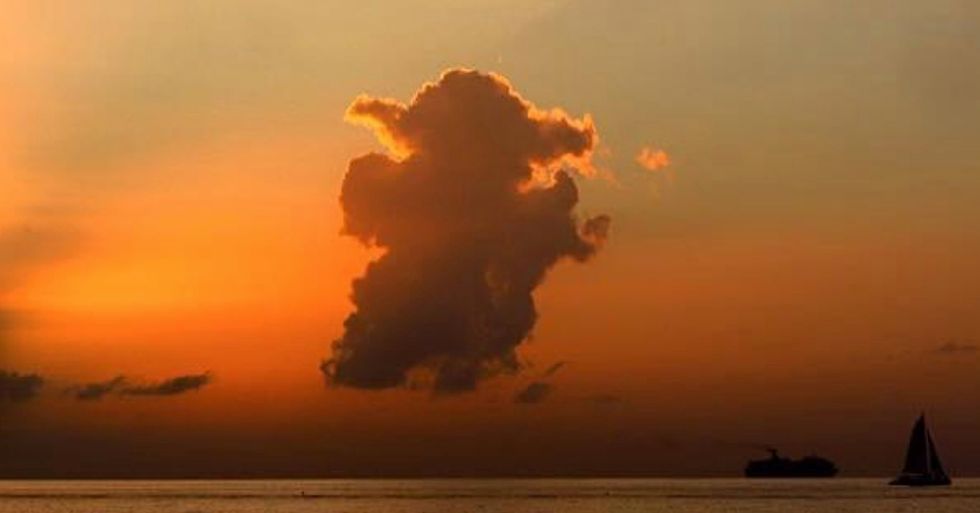 The world's obsession with the green baby has been sparked once again this week, with one woman claiming to see him in the clouds.

We have to admit, the picture is insane... keep scrolling to take a look.

Unless you've been living under a rock...

The world is obsessed with him.

Ever since he popped up in Disney's Star Wars spin-off series, The Mandalorian, the world simply can't get enough.

It's been the highlight of The Mandalorian for many.

Baby Yoda well and truly got the viral treatment...

Yep, really. The fifty-year-old green baby managed to race ahead of the likes of baby Archie, according to  Google’s ‘Year in Search 2019’.

Not to mention all the merch that's been released...

Which, of course, has pretty much sold out everywhere.

Why? Because one woman claims to have seen him appear in the clouds. Keep scrolling to see the picture...

Of course, these kinds of stories surface all the time...

And more often than not, the so-called shape or character is near-impossible to pick out.

This one is pretty insane.

The picture appeared on a Reddit thread last week.

The snap captioned: "A family friend took this picture while on vacation and I can’t unsee Baby Yoda!" popped up on a subreddit dedicated to the fan-favorite creature.

The photograph was reportedly snapped in the Cayman Islands...

The islands, located in the Caribbean sea, are a popular vacation spot. So maybe baby Yoda was looking to top up his tan?

The snap was instantly flooded with reactions from astounded fans.

It's shocked even the biggest of skeptics out there. Keep scrolling to take a look for yourself...

Safe to say, this has only ramped up the obsession with the beloved creature.

"Your friend was blessed," wrote another user.

Many think the appearance of baby Yoda in the sky signals something even bigger...

"Even some higher power out there knows....this is the way," declared one fan.

The picture has made its way around to Twitter, of course...

And the reactions were just as strong there.

There's no doubt about it... that's definitely baby Yoda.
To learn more about the highly-anticipated The Mandorlorian season 2, keep scrolling. Fans are divided on one character rumored to be featured…