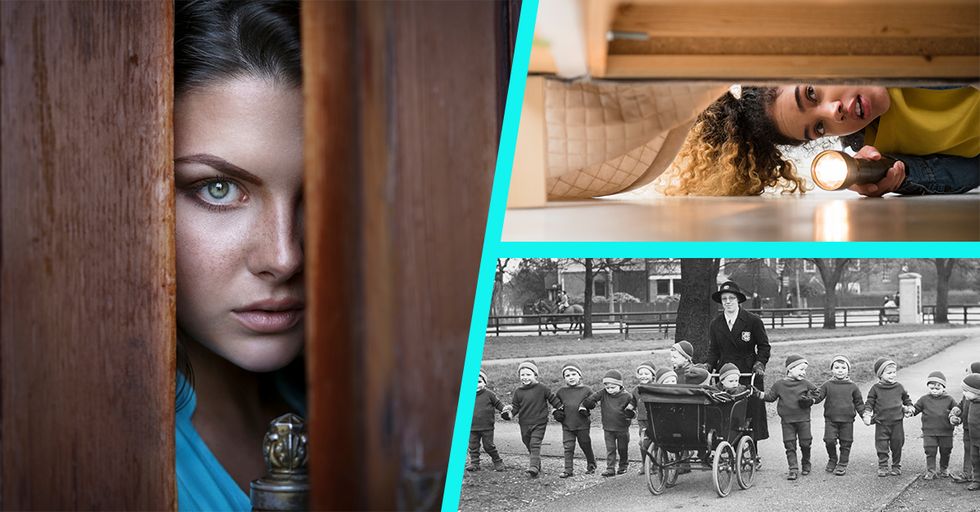 Look, parents need to have a life outside the home, too. That's what babysitters are for.

When things don't go quite that smoothly, though, you get stories like these ones from a recent AskReddit thread:

It was at a house in my neighborhood (about a 5-minute walk from my house). They had an older girl (who was maybe 8 or 9) and a young toddler-ish age boy. Their mom was giving me a rundown of their routine and giving me a little tour of their house. We went into her son's bedroom and she said something to the effect of, "hmm that's odd, why is his window open...?" [She] quickly shut the window and seemed somewhat distracted from that point on.

She hurried through the rest of the tour and then told me to go hang out with the kids while she finished getting ready. About 2 minutes later she hurries in, sort of hustles us out the door and outside. I'm pretty confused at this point, but being an awkwardly shy middle school-aged girl I just go along with it. Once we get to the driveway she pulls me aside and tells me that she went back to her bedroom after noticing the window was open, and saw most of her jewelry was missing.

Soon after telling me this, about 10 cop cars come flying in, cops run out with guns drawn , the whole works. Cops tell me to leave, so I head home, pretty terrified. Turns out the burglar (who had broken in the night before) was still hiding in the son's closet, right next to where we were standing when the mom realized the window was open and something was off. Don't really like to imagine how that could have gone had she not noticed the open window and left me there for the night with her two kids. Needless to say, that was the beginning and end of my babysitting career. –ste11ablue

This was around the time my little brother got pills for ADD and he was having the worst time swallowing one pill by itself and water... Cue it gets around 8 pm and my brother comes down and says, "I practiced swallowing my pills!" He was super proud and I was terrified. I thought he swallowed the whole bottle or enough to be overdosed. Call my mom up and she's like, "Okay, get him water and try to get him to throw it up." He probably thought I was crazy for what I tried to get him to do. I learned later he was practicing with candy, specifically skittles. Just that gut wrenching moment was terrifying to me – crazyrandomnerd

I babysat these two WILD terror boys that lived across the street when I was young, maybe 14. They were never disciplined and incredibly hyper and violent. The youngest one, maybe 4 at the time, swiped a pencil from a drawer and stabbed me in the forehead above my eye with it HARD. The lead broke off under the skin and I couldn’t get it out. It ended up getting infected and becoming extremely painful. I ended up having to have surgery and still have a scar from it. The kids' parents paid the medical bills but never apologized. She just basically said that boys will be boys. They were awful people. – rachfitz

I get 2 elementary school age kids ready for school in the morning so their parents can leave for work. I came in one morning and the mom was on the floor, having what I later found out was a seizure. The dad had already left, and she wasn’t responding to me.

While I was on the phone with 911, I could hear the TV in the next room and figured the other kid was still sleeping. [The mom] started to come out of it and got up to continue making her lunch for work. I could hardly convince her to sit and I was scared she’d fall and I wouldn’t be able to catch her.

I sent the TV-watching kid upstairs with the dog just before the paramedics arrived. I’m on the phone with the dad, neighbors are texting me if everything’s all right, the paramedics are asking me questions. They take her to the hospital and I talk to the kids and get them ready for school. They were totally okay — really, they missed the whole thing. The school bus came, and I cried the whole way home! – adognamedpancake

Once I was babysitting two sisters— one was about 6 and the other was an infant. The 6-year-old was down the street at a birthday party and the baby and I were just chilling and watching TV. The parents were off at a movie and about 30 minutes after they left there was a knock at the door. I got up and looked through the small window in the door to see this dude in a shirt with an "Xcel Energy" tag and a clipboard. He gives me this talk about checking a gas meter in the basement. I had this instinctual gut feeling that something was wrong and tell him that 'I'm the babysitter — give me a minute and I'll call the parents to see if they forgot to tell me about an appointment.' So I head to the kitchen to get the phone and call up the mom (I also checked to make sure the back door was locked). She starts freaking out and assures me that they didnt have an account with Xcel and tells me they're leaving the theater immediately.

I go back to the door and explain that I wont be letting him in. He starts getting pushy with me and telling me that its really important and is a safety issue. I didn't see any Xcel Energy van or car on the street out front and am beginning to get nervous. Luckily, the parents called a neighbor who showed up and demanded the guy leave the property. The guy ran off and walked around the corner so we didnt get a vehicle description but the police came and took my statement as soon as the parents got home. A few days later the parents were telling me that a similar guy had gone to a neighbors' and tried to intimidate his way into her house. – Tinyassfeet

I was babysitting my niece a couple of years ago (she's six now, so she would have been three then). I put her to bed, read her a story, gave her a cuddle, then went down to watch a movie and ended up falling asleep on the couch in the living room. I don't know how much later it was, but I woke up to something grabbing my ankle. My eyes shot open, I freaked the f**k out, and I shook my leg as hard as I could. Bad idea. She'd managed to unfasten her door, climb over two different baby gates and get down the stairs without doing herself an injury, all to ask me if I could read her another story. We don't tell her mother about the time I almost dropkicked her daughter across the living room. – Portarossa

I was playing hide-and-seek with the three kids I was babysitting (they were 3, 6, and 9) and I was seeking. Well, I found the oldest and the youngest but couldn’t find the middle child. After 30 minutes of searching (the house wasn’t that big), I just wanted to die. I couldn’t believe I actually lost a child; it was like a bad movie. So I called the parents, ready to have the worst from them on account of losing their child.

I told them what happened while I’m scared s**tless, and they laughed and said, “Did you specify the boundaries?" The WHAT. Turns out the smartass middle child hid in a bush in their neighbors front yard (a place that she had hidden in before, which is how the parents new about it) because I didn’t SPECIFY the damn BOUNDARIES of hide-and-seek. Even though the parents weren’t mad, I still have nightmares about that. – mai_life

I was watching 4 kids while their Mom was out and the Dad was working on the duct work on the house. Dude got super high and somehow crawled into a duct and fell through the ceiling right in front of us. I damn near pissed my pants. – TazwellJenkins

[My mom] was watching a friend's daughter who was somewhere in the 2-4 year old range. The little girl was so sweet. Even at such a young age she didn't want to inconvenience anyone. While eating lunch, she started to choke, but every time my mom looked over at her, she would just smile big as anything. Mom eventually realized the poor girl was really choking and helped her. The poor kid would have died just to not have my mom worry. – MissaFrog

The kid was already sleeping for a few hours, I was watching a movie. At midnight, I heard something scratching at the door. First I ignored it, got scared and checked again. Then I saw glowing eyes through the window: They had a dog and they didn't tell me. – 97Kelly

I was in the living room, watching Sister, Sister when all of a sudden I hear a man say "Hello." I check the front door, look out the window at the driveway, parents aren't home. Go upstairs and check the kids, they're both still in bed (and not dead with a maniac wearing their skin as a disguise). Go back downstairs, hear it again, from the darkened dining room: "Hello. I am Armando." They had a freaking parrot. – Podaroo

I was 11 and babysitting for our neighbor who was going through a nasty divorce. She had two sons who were 8 and 1. She leaves on her date and says she'll be back around midnight. She doesn't tell me where she's going and I have no way to contact her because it's the '80s and no one has cell phones.

I'm watching TV, the boys are asleep, everything's fine. Suddenly, there's a knock on the door. Then banging and drunken cursing. "Cheryl, you f**king w**re, I know you're in there, open the f**king door!" I'm frozen looking at the door when the oldest boy comes flying down the stairs and runs to the door yelling, "Daddy's home!" I grab him and pull him away from the door. By this time, the ex-husband has gone to his truck to get his gun to teach that w**re a lesson. He's banging on the door and threatening to start shooting through it if no one opens it.

I grab both kids and run out the back door and across the street to my house where my mom calls the police. He gets arrested and I wait with the kids at my house for their mom to show up. Cheryl shows up, is totally unfazed by the story and doesn't even pay me because she "lost" her wallet at the restaurant. – octopodes2016