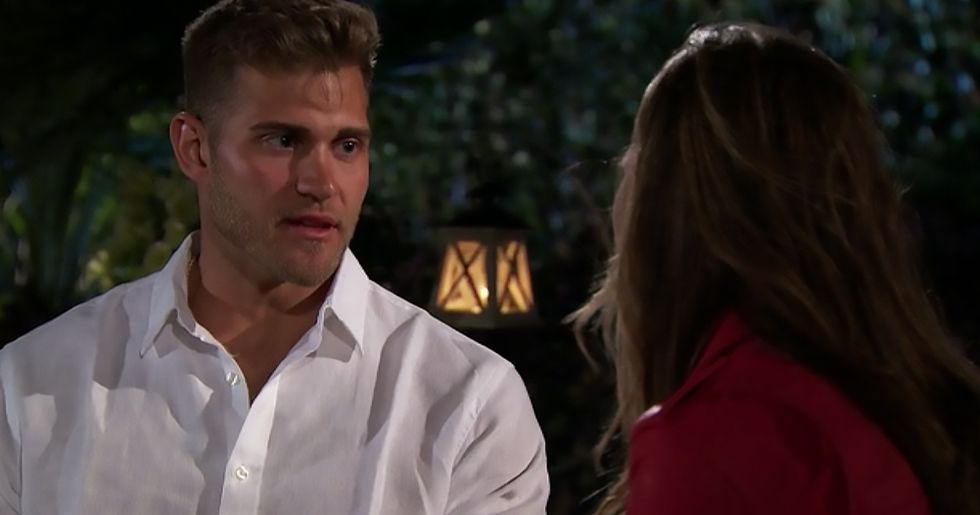 When we think of shows that can really teach us something about our culture and ourselves, there are some pretty regular contenders. Mad Men had a lot to say about isolation and consumerism. Euphoria is about how deep human longing can cut. Even Game of Thrones had a lot to say about power and the consequences of holding it.

But when you think of shows that have something important to say, one show that might not necessarily pop into your head is The Bachelorette. And yet, the reality TV dating show in which one lead whittles down a pool of potential fiancees week by week just made an honest-to-god, flag-in-the-ground statement.

This week, the show was out of control, for reasons both petty and important, and we just have to talk about it — especially the insane moment that closed out the episode...

This season's Bachelorette is Hannah B.

The Alabama Crimson Tide-loving Bachelorette this year is Hannah B. I think that her name might actually be Hannah Brown, but this is The Bachelorette, goddammit, and once you get an initial at the end of your first name because there are four other contestants with your first name, that last initial will follow you to your grave.

From dancing at inopportune moments to acknowledging when she feels weird on camera, Hannah is one great big ball of awkward. And yet, that's Hannah's greatest strength — she is, at every moment, just so delightfully herself.

But this season has had one major hang-up: Luke P.

Luke P. has lied, disrespected the time of the other contestants (a major sin in The Bachelorette universe), gas-lit Hannah herself, and even come close to physical altercations with many of the men in the house.

He's the villain of the season.

And the question of whether or not he's aware of it has hung over his every interaction with Hannah. Is he a manipulative monster, or is he a sad, small child who is too dumb to realize what he's doing to the people around him?

The other guys hated Luke from the jump.

There is a competition at the heart of The Bachelorette - a bunch of these guys want to win the heart of the one girl. But the way that these guys have felt about Luke goes way beyond that. They saw his toxicity right away, because he wasn't putting on a mask with them — only with Hannah.

But Hannah's had some weird connection with him.

And by "weird connection," I mean she thinks that he's crazy hot. Luke and Hannah have intense physical chemistry and an equally intense everything-else anti-chemistry. Guess that's what happens when one half of a couple is buried so deep behind repressed feelings that his authentic self has effectively ceased to exist, you know what I mean?

But honestly? I don't know what this season would have been like without Luke.

Does Hannah just meet a bunch of guys, go on some nice dates, and then choose one to marry? That's... what? Two episodes? Three, if they stretch it out? We Bachelorette fans are not about that. We need those hot, hot dramz in our lives.

Hannah B. has been cutting great guys left and right...

From Brandon to Mike to... well, those are the only two that I can remember, Hannah's let go of some truly great potential husbands. Wait, was that guy's name... Brendan? It might have been Bramden?

... all while keeping Luke P. around.

Somehow, week after week, Hannah continued to give Luke P. a rose, something that contestants get when they've avoided elimination for another week. It was baffling every single time that Luke got a rose, and the worst part was, it was always the last rose. Infuriating.

This week, The Bachelorette had its annual Fantasy Suite episode.

This is the week when, after dating this clump of guys for a few weeks, the Bachelorette is given the opportunity to spend a night with the guys. Individually, of course. Don't be gross. Now, The Bachelorette can be a little backward in its view of sexuality, but at least they acknowledge — through the annual Fantasy Suite episode — that it would be ridiculous to get engaged to someone without having slept with them first.

And Hannah B. got down with our boy, Pilot Pete.

Specifically, in a windmill.

What's the perfect place for Hannah and Pete to spend their first night together? Why, the only answer is a hollowed-out windmill, complete with what appeared to be a treasure chest full of condoms. It was lovely, in as far as a night of romance provided by the producers of The Bachelorette can be lovely.

Then Hannah went on some other dates, too.

Whatever, blah blah blah. Hannah went on some other dates with Tyler C. and Jed. They were fine. Whatever. The issue is that there's almost this level of mutual respect and affection between Tyler C., Jed, and Pilot Pete. You get the sense that they'd be unhappy if they don't win, but that they'd be happy for Hannah ending up with a great guy. It's all very sweet, but it is not very filled with dramz.

Then, we got to the main event: Luke's date.

Together, Hannah and Luke had a pretty nice day-date. They made out a whole bunch, and even took a ride in a helicopter, causing Hannah to say: "I think it'd be so fun if we could swing from a ladder up here." Luke replied, "I love your imagination." (Because, remember, Luke is an empty vessel without a hint of personality of his own, so he can only glom onto other people who do have imagination.)

But then, we got to the nighttime portion of the date.

Luke sits down with Hannah and tells her that he has something important to talk to her about. He says, "I'm being honest with you. I look you in the eyes and I see my future wife." PRO TIP: people who are being honest don't have to say that they're being honest. They just are honest.

He brings up his big topic.

Perfectly healthy, right? Two adults considering engagement should talk about sex. It's a huge part of any relationship, right? Well, not so fast. Luke is going to secrete toxic masculinity all over this conversation...

You see, Luke is hyper religious.

Last week, when Luke took Hannah to his hometown, we saw that he was deeply devoted to his Christian faith. In fact, the few times that we saw him and Hannah clicking on a non-physical level, it was when they were talking about their faith. Bringing Hannah to his Sunday school group may have been a good move on Luke's part.

Years ago, Luke met God in a shower.

At the Sunday school group, Luke told a story that the audience had heard maybe fourteen times throughout the course of the season: he was drinking and having sex in college until, one day, he saw God while he was taking a shower. It changed his entire life and set him on the Righteous Path.

This made him realize that sex is both beautiful and important... so long as it's in the context of marriage.

Luke says to Hannah: "If you told me you were having sex or you had had sex with one or multiple of these guys, I'd be wanting to go home, 100 percent." Keep those words locked in your mind, because they're going to come up again in a second.

And Hannah B. was not having it.

Hannah's given Luke so many chances to straighten up this season, and he still hasn't. So for him to set this ultimatum for her was deeply unfair. Plus, Hannah caught on to what was going on right away, telling him, "Sex might be a sin outside of marriage, but so is pride." She knew that it wasn't about his faith — it was, as all things with Luke are, about his ego.

It even started to rain when things went sideways!

The moment that their outside dinner date veered off course, the rain came tumbling down. A lot of times on The Bachelorette, you can tell when the producers are orchestrating drama (Cam sticking around until Week 6, anyone?). But I don't know how they would get the weather to cooperate. It sure seems like, as Luke invoked God to make Hannah feel bad about herself, God sent a pretty clear sign back saying, "Nah brah, you messed this one right up."

And then Hannah said something incredibly important.

Refusing to feel shame for having sex with the men that she's dating, Hannah tells Luke, "I know that who I am is light. I am light." You hear that? Hannah is light. Incredible. It was such a simple, beautiful way to respond to an attempt to damage her self-worth, and it spoke to how much she's grown throughout this season. It was an all-timer of a Bachelorette moment, for sure.

What Luke was doing in this conversation won't be unfamiliar to women — he was telling her that she was less of a person if she chose to act on her feelings of sexuality.

He was looking to control her.

A lot of times, emotional abusers will make their victims feel so terrible about themselves that they start to believe that they deserve the abuse. Here, Luke was doing just that, using religion as his blunt weapon to bludgeon Hannah for simply being a human being in the world.

But she handled it so perfectly.

It's absolutely true — Hannah has no obligation to anyone. She can have sex with whomever she chooses. This whole interaction revealed Luke's real view of Hannah — she's not a person, free to live her life. She's a trophy to be won, and, to Luke, a trophy that must remain spotless if it's to have any value.

Immediately going into recovery mode, Luke tried to lie and manipulate. He was "misunderstood." I hope that you took my advice and remembered the exact words that he said, because there was no misinterpreting them. He literally said that that if Hannah slept with another guy, he'd "be wanting to go home, 100 percent." It's the verbal equivalent of the 100 emoji.

But still, Hannah booted him the heck off The Bachelorette.

The guy's jaw just dropped. And not in an internet meme-y sort of "this-will-make-your-jaw-drop"-sort of way. His lower mandible literally dropped. For those of us struggling with the Luke P. situation these past few weeks, it was a massive relief.

If Luke had an authentic self, this wouldn't have happened.

With Luke, it is — and always has been — superficial and performative. It's one thing to have a deep religious faith and to act accordingly, but if you're dating someone who doesn't share those values, an authentic person would say, "You know what? We're not compatible, and I wish you all the best."

Hannah B., though? Her greatest strength is being herself.

Even under assault from the most toxic of men, Hannah B. didn't even feel the need to justify her choices. She eventually just told Luke that she'd done the deed in a windmill and she wasn't ashamed.

And she told Luke where he can stick it.

This was Hannah owning her body, owning her choices, and owning herself. She was true to who she is. This was the moment that Hannah became the greatest Bachelorette in the show's history. Although, to be honest, I've only watched this season and about three-quarters of Jojo's season, so who knows if that's true?