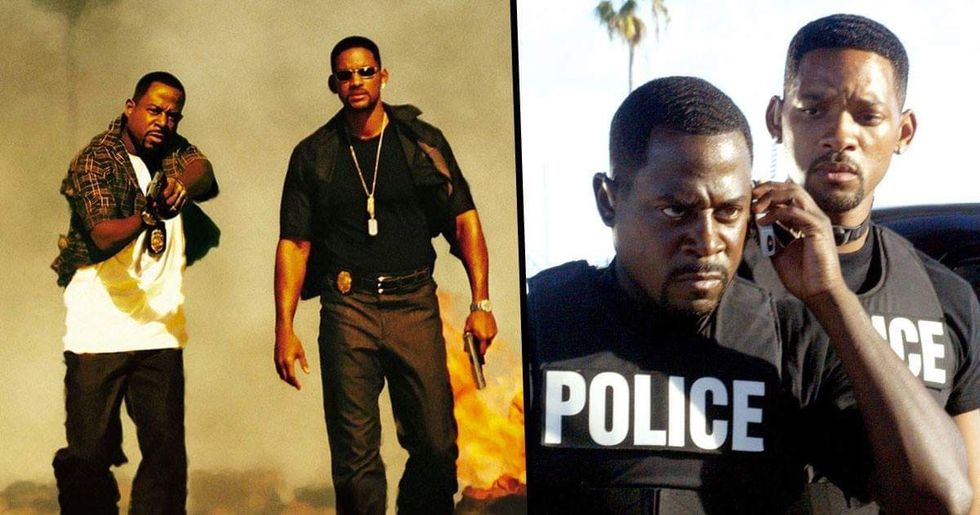 That's right, you heard it here first. Bad Boys 3 has officially started filming today. For years there have been tantalising rumours about this sequel, but the day is finally here. Filming has begun and we can all start preparing ourselves for the car chases and jokes that it's bound to bring.

The first Bad Boys film came out way back in 1995. It was while Martin Lawrence was still involved in his show, Martin. Will Smith was still tearing it up in Fresh Prince of Bel-Air.

In 2003 they both took up their roles again for Bad Boys II. And now we get to see what they have in store for us with a third film. We can't wait to find out how this one will roll out.

You heard that right- the Bad Boys franchise is back!

After first hitting our screens back in 1995, the US cop duo Bad Boys are back. These Miami cops are returning to our screens to bring us race cars, explosions and a banter-filled bromance.

Will Smith will be back on our screens once more!

For years we have been waiting to hear the news that Bad Boys will be returning. In October Will Smith signed a reprisal, making a comeback as Detective Mike Lowrey.

And so will Martin Lawrence!

Martin Lawrence is going to be taking up his old role of Marcus Burnett. Maybe he'll even return to playing Marcus Burnett playing Will Smith playing Mike Lowrey... Watching actors imitate each other is always a good laugh.

The first Bad Boys film was released in 1995.

Can you believe it; the first Bad Boys film was released way back in 1995? Michael Jordan was still in the NBA, the World Trade Organisation was formed and Ebay began. And most importantly, it was the start of our obsession with Bad Boys.

It was a roaring success

1995 was a simpler time. This film was made on a budget of $19m. It was an instant success and made nearly seven times as much, raking in $141.4m worldwide.

How could it not be a success?

With Will Smith and Martin Lawrence on screen together it was always like to do quite well. But this was made even more certain when it was directed by Michael Bay and produced by Jerry Bruckheimer.

This was the start of a beautiful friendship for Bay and Bruckheimer. Three years later Armageddon was released. Who will ever forget Bruce Willis stepping out in his space suit?

And then there was Pearl Harbor ...

Less than a decade after the release of Bad Boys, Bay and Bruckheimer made explosive movie viewing once again. Pearl Harbor managed to combine heart-breaking moments with more blasts and explosions. It was something of a specialty of theirs.

Will Smith was filming Fresh Prince of Bel-Air at the time.

The original script wasn't the best...

Michael Bay has said that he felt the script was lacking in some places. Luckily he had Will Smith and Martin Lawrence to hand. These two actors had no problem with improvising where necessary.

And then there was Bad Boys II !

After an eight year hiatus, these comic cops returned to our screens. Same city, same winning team, and same fine-balance of explosions and gags. What's not to like?

It might have been eight years later, but there didn't seem to be any reason to change the winning team. Again it starred Smith and Lawrence, and was directed by Bay and produced by Bruckheimer. Although Smith did have a different girlfriend in this one. It’s all in the details.

Ready to bring it on?

Bad Boys II meant that it was time for Detective Lowery to have a new girlfriend, who was in fact his partner's sister. Gabrielle Union, from Bring it On and Ten Things I Hate About You, played Lowery's latest love interest in this film.

It was 2003 and things were different. Ronaldo was just entering the football scene for Manchester United, Lance Armstrong was cycling better than ever and the Concorde was making its final flight. The film had nearly seven times the budget, with $130 million, but it still made as sizeable profit when it took $273.3 million at the box office.

But this time, there's no Bay.

Rumour has it that Michael Bay is not involved in this film because they couldn't afford both Michael Bay and Will Smith together. Michael Bay is one of the highest earning directors of all time at the US box office, and the fifth wealthiest movie director in the world.

Will Smith is doing alright for himself...

Last year Will Smith was the sixth highest paid actor in the world, earning a reported $42 million. And that doesn’t even take into account the $100 million that he made for Men In Black III.

We all remember him best as the Fresh Prince .

In real life, Will Smith spent the 80s being a rapper with his friend DJ Jazzy Jeff. Then in 1990 he got his break-through role with the Fresh Prince of Bel-Air, which ran through to 1996, and he has never needed to look back.

Since then he's made a name for himself as a more serious actor.

Will Smith has definitely grown as his career has continued to find success. He has won four Grammy awards and been nominated for five Golden Globe awards. He has even been nominated for two academy awards, for Ali in 2002 and for The Pursuit of Happyness in 2007.

And the success doesn't end there...

He has starred in eight films which have consecutively opened at the number one spot in the box office. Plus he is the only actor to have eleven consecutive films gross over $150m internationally. Wow.

And can you believe that he is now fifty years old?

For many, Will Smith will always be a wayward boy who wants to be a rapper and lives with his Uncle Phil. But these days Will Smith is a fully-fledged grown-up, with his own family and children.

And then there's Martin Lawrence...

During the original Bad Boys, Martin Lawrence was still filming his own show, Martin, which ran from 1992-1997. Although these days perhaps he is better known for his hilarious role in Big Momma's House.

And they're not the only people to return for Bad Boys 3 ...

Joe Pantoliano will also be reprising his role as the comedy cops' boss, Captain Howard. He might be known to some people as a star of The Matrix or Memento, but for many he will always be Captain Howard.

Another Bad Boy film, another girlfriend for Lowery.

The beautiful Mexican actress Paola Nuñez will play Lowrey's ex-girlfriend in the new film. Until recently she was mostly known for her work in Latino films, but since 2017 Paola Nuñez has been playing opposite Pierce Brosnan in the hit TV-series The Son.

But there will be some differences for this new film.

This time it won't just be Lowery and Burnett fighting crime. There will be at least three new members of the police too, who will be challenging the old school Bad Boys. And we think you might recognise them.

First up is Alexander Ludwig.

Alexander Ludwig first caught the public's eye with his role in the Blockbuster hit, the Hunger Games. More recently he's found success in his role in the TV show, Vikings. All those combat roles should help him out in this new role.

The next new-comer is Vanessa Hudgens.

Vanessa Hudgens first found success with the hit teen-film series, High School Musical. Since then she's been in a number of roles, from Springbreakers to The Princess Switch. While she may play a hard-ball in this new film, she'll still always be Gabriella Montaz for many people.

And finally its Charlie Melton.

If you're not still in high school, there's a good chance that you've never even heard of Riverdale, but this Netflix mystery series has taken the teenagers by storm. Charles Melton has found fame in this show playing Reggie, who is a bit of a bad boy himself.

Although Bay and Bruckheimer have given us some quality films in the past, it's good to get a fresh feel for the new Bad Boys film. The new Bad Boys 3 film is being directed by the Belgian directors, Adil el Arbi and Bilall Fallah. They've already directed Black and Broeders and we have no doubt that they'll doing a great job again with this film.

Not long to wait now!

For years there have been tantalising rumours that a new Bad Boys film is on its way, but they've always been lies. Not any more. This film has an actual due date, January 17, 2020, and it started filming today!

Sure we've all got a good idea of what to expect from the latest reboot to hit our screens. I don't think anyone is expecting any surprises. But this film was a classic for a reason. We ride together, we die together. Bad Boys for life.