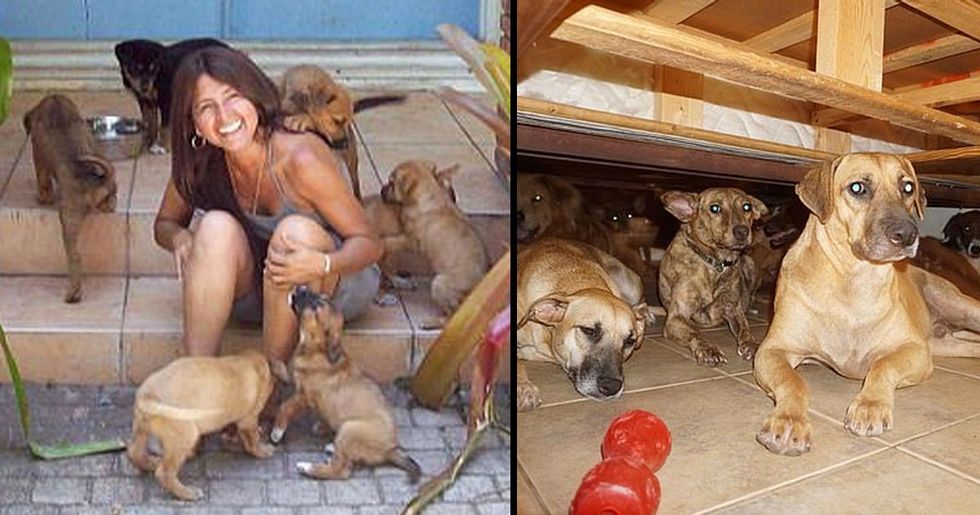 Bahamas Resident Shelters 97 Dogs in Her Home During Hurricane Dorian

As well as the devastation that it's having on residents, the hurricane is also leaving hundreds of dogs abandoned and terrified. But one woman has been trying to change that by sheltering ninety-seven stray dogs in her home to protect them as the hurricane tears through the country.

"We don't even know what's coming at us. All we know is it's possibly the biggest. I have - I'm not sure that I've ever even heard of a Category 5. I knew it existed. And I've seen some Category 4's - you don't even see them that much. "But a Category 5 is something that - I don't know that I've ever even heard the term other than I know it's there. That's the ultimate, and that's what we have, unfortunately."

Quite worrying considering our president doesn't have a clue what it is, don't you think? Hurricane Dorian is stampeding right towards the path of Florida's peninsula, and we should soon know whether the state is dealt a powerful blow or a less intense scrape.

While residents can prepare, the same can't always be said for their pets.

Many dogs are left lost, abandoned, and terrified as the storm tears through the Bahamas.

But one Bahamas resident has stepped in...

Chella Phillips has provided shelter to a staggering ninety-seven dogs in New Providence to protect them from the vicious storm.

She runs a non-profit named "The Voiceless Dogs of Nassau, Bahamas."

Her organization, which she runs without any government funding, aims to send local dogs to adoption and rescue agencies in the United States.

Over the years, she's cared for a staggering number of dogs.

Through her non-profit, she has cared for almost one-thousand homeless dogs on the island.

And with hurricane Dorian ripping through the Bahamas, Phillips has stepped in.

So many dogs are heartbreakingly left behind during natural disasters, but with people like Chella Phillips, many of them have a second chance. Her home is now full to the brim with nearly one hundred homeless pooches.

Phillips has shared several photos and updates on the dogs in her home.

In a viral Facebook post, the dog lover wrote: "97 dogs are inside my house and 79 of them are inside my master bedroom." "We have barricaded the refuge and nobody is outside, the music is playing in all directions of the house and the AC is blowing for them."

People have been donating crates for the stray dogs residing in Phillips' home.

Many of the dogs that Phillips is housing have come to her terrified or ill, meaning crates are essential for their care. "I managed to bring some less fortunate ones and I really appreciate some of you donating for crates.. I really needed it for the scared ones and the sick ones. so Thank you! "We may not get hit as hard as other islands and the saddest part is that after the hurricane leave the Bahamas, some islands will take a long time to recover. Each island has an abundance of homeless dogs, my heart is so broken for the ones without a place to hide a CAT 5 monster and only God can protect them now."

Surprisingly, Phillips says that all the dogs get along.

"For all the ones asking.. yes.. everyone here gets along and welcome the newcomers with tail wags cause they know they are their brothers and sisters in suffering on the streets," she wrote.

Sadly, the storm has started to sweep through Phillips' refuge.

Despite her best efforts, she can't keep the rainwater away from the refuge. "Not even 3 pumps could contain the rain from washing us inside and after an hour all 3 pumps reheated and burned down and we have been outside with buckets fighting a losing battle..." She also currently has no service which means "no more cartoons for the sick dogs" until she can purchase new ones.

But she assured everyone that, despite a "stressful" night, she and the dogs are okay.

"I pray for the other islands who have unimaginable damages and I don't see how any dogs or any living being could have survived outside. My heart goes out to them." She continued: "Thank you for the outpouring support and heartfelt prayers from so many people that don't even know us, my post from yesterday went viral and total strangers are reaching out to us giving us the exposure that we need so bad..."

But, with the ferocious winds and deadly floods, the death toll is heartbreakingly expected to rise and rise within the next week. We can only hope that Florida doesn’t face the same fate.