Baking Fails That Will Haunt Your Nightmares | 22 Words 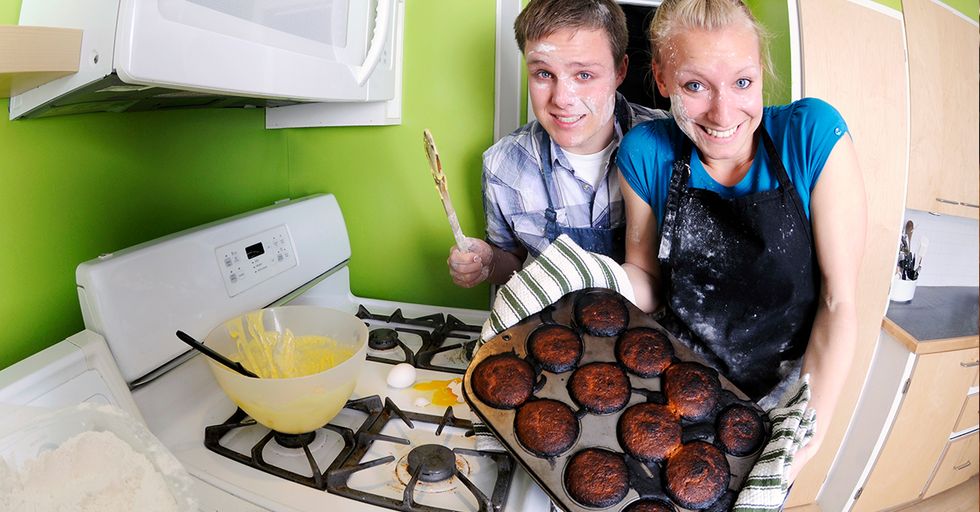 Baking Fails That Will Haunt Your Nightmares

Look, some people were not meant to be bakers. The same way some people kill plants the second they get them in their possession, some people can't seem to get a baked good right. And that is OK! They probably have lots of other, non-kitchen-related talents that they can contribute to the world.

But holy cow these people need to put down the spatula and slowly back out of the kitchen. Maybe forever. These baking fails are so horrendous that they might give you nightmares. So be warned. Many of these are disturbing beyond your wildest dreams. They are full of otherworldly horrors that will tickle your spine and haunt you forever. If there was ever a time to scream, "Leave it to the professionals!" this is it. This is very much it. When you take a gander at these astonishing baking fails, you may feel better about your own abilities, which is great. But mostly, these people need to feel deep shame for the horror they've brought upon the world.

Nicole Byer, as the host of Nailed It, is the best person to kick of this list of monstrosities.

These will make you say, "Oh my god!" And not in a good way.

I'll say! This cake looks less like a cheerful girl and more like a creepy doll from a horror movie that sucks people's souls out of their body with her dead eyes.

The towers on this cake look a little (ahem) inappropriate if you ask me. What is this, the castle from The Little Mermaid or something?!

And Easter was never the same again. Why the naked face?! Why?!

This person has the nerve to charge $50 for this cake? This is not an "awesome" cake.

Is it called a rat cake because you made the cake and then a bunch of rats stomped on it until it was unrecognizable?

Are those three pink dots in her mouth supposed to be her tongue? They look more like devil chomper teeth that she would use to bite your fingers off.

You know that warped Mocking Spongebob meme? That's what this looks like. I think Jiggly Puff is making fun of me.

In addition to the horror that is the Dolly Parton figure on this cake, who puts wrapped Hershey's kisses on a cake? That is the definition of insanity.

No matter how large you write "Nailed It" on the bottom of this picture, it doesn't make it true.

Sure, it's probably beyond annoying to try to bake with a toddler, but this is atrocious. Buttercream should not be that hard to make.

I honestly don't even know what this was supposed to look like. It has not retained its original shape.

Well, this went horribly wrong. At least you can scrape the cookies off the tin and eat the crumbs.

If this is actually what Spongebob and Patrick looked like, kids everywhere would have been traumatized for life many years ago.

To be fair, these do look hard to make. But there's nothing sadder than a pancake that's supposed to be fluffy that's actually flat as a, well, pancake.

There's nothing colorful or cheerful about this mess. How did they manage to make all the cakes different sizes? Truly a feat.

Oh no! These baby chick rolls look like they've exploded. They are so crazy looking!

This looks like an evil hedgehog that haunts kids' nightmares and then when they wake up it's on the table for their birthday. Then they would scream again, and wake up because the first time they woke up was part of the nightmare.

He looks friendly and approachable in the nice cake, but angry in the evil, bad cake! Why?!

There's nothing sadder than when rainbow frosting goes wrong. It turns into a sad brown mess, and it's the worst.

This rainbow crepe cake sent a shiver down my spine. It's so awful I have no other words to describe it, and I have to move on now.

The worst part about this is how clearly excited our baker was to make these heart-shaped cookies. Better luck next time, friend.

Um, did it though? If your goal was to make a cake that looks exactly like a butthole, you did great.

I legit had no idea what this was supposed to be until I read the caption because all I saw was a penis that said "weed."

Cheesecake is not that hard to make. What could have possibly gone wrong? And the color is also wrong.

This looks like a warning that a serial killer who likes to bake pies leaves for his next victims before they attacks.

I have no idea this is what happens to caramel when you forget about it, but it legit looks like lava.

Pizza did not come out as expected. from nailedit

Something terrible happened to that pizza while it cooked. I don't know how this person tortured that poor pizza face, and then ate it.

This cake would be perfect except that it's burnt to a crisp. Share this with someone loves to bake but probably shouldn't be allowed in the kitchen.