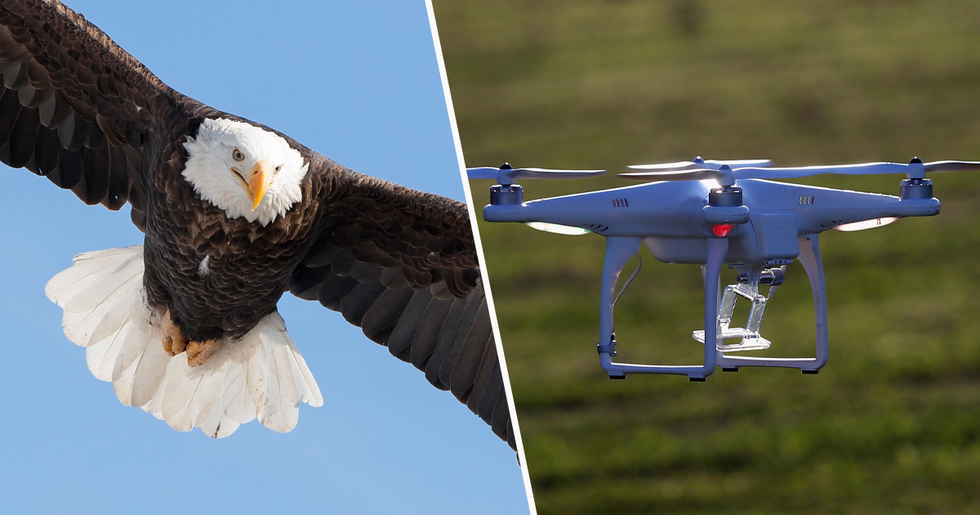 As the world becomes more technologically advanced, it seems only fair that mother nature adapts allowing for some fair competition.

And it looks like machines aren't the apex predator after all... Sorry, Elon.

And now they're more accessible than ever before.

Making them a bit of a nuisance.

Not to mention being a huge breach of privacy.

But there is something that can be done to stop them.

And it's a little bizarre.

People have been training Eagles to catch disruptive drones.

Eagles are so good at taking down drones in fact...

They're actually being professionally trained for that exact purpose!

Dutch Police are using this very method to take down unauthorized drones.

This tactic was developed after concerns arose that some drones are being used to commit crimes.

However, whether they're trained or not, it looks like the birds really don't like the look of these flying machines.

As we found out in recent news that a bald eagle was spotted attacking a government drone.

The Phantom 4 Pro Advanced quadcopter was torn out of the sky by the bird of prey.

Which caused the drone to spiral down into Lake Michigan.

The Pilot, Hunter King had been processing data of shoreline erosion when the incident happened.

It took place near Escanaba, in Michigan’s Upper Peninsula.

Although King experienced reception problems just 7 minutes into the flight.

He pressed the button to recall the drone and could see it returning on the live stream.

But as it was travelling at twenty-two mph, a swift attack by a bald eagle mid-flight was enough to wipe it out.

Causing the drone to careen uncontrollably.

During its descent into the water, it sent 27 warning notifications.

Including a notification that a propeller was missing.

A couple who were bird-watching at just the right time, saw the eagle strike something in the air.

Department officials said the bird appeared to fly away without and didn't seem to have any injuries caused by the propeller.

After mapping its last movements, the drone was located 150ft offshore in shallow water.

The incident was confirmed by the Department of Environment.

And after careful consideration, the department is looking into what it can do to reduce the possibility of endangering the birds.

They've come up with the idea they could use "skins" or other designs on the aircraft.

To make them look less like other small birds, the agency said.

A statement on the EGLE website said: "The attack could have been a territorial squabble with the electronic foe or just a hungry eagle."

And just last year there were reportedly 849 active nesting sites.

This is a dramatic increase since the 1970s, where there were as few as 73.

And can reach speeds of around 45mph, with dive speeds of 99mph. Just imagine that hitting you mid-air!

Clearly these guys are the alphas of the skies.

Let's just hope none of them get injured! Keep scrolling for more bird news, and why everyone is freaking out after seeing what the Harpy Eagle looks like...