Bam Margera Gave out the Door Code to His Private Skate Park on Instagram, Hundreds Showed up to Use It | 22 Words 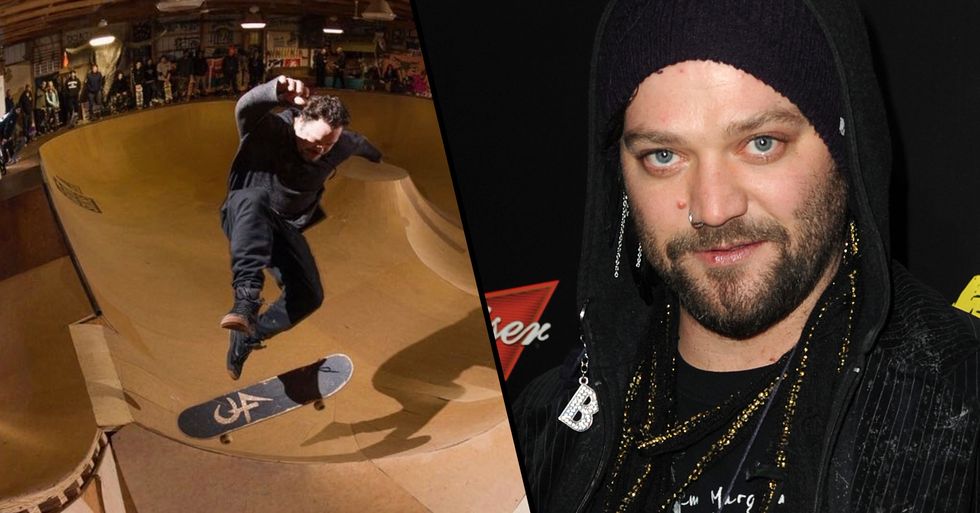 Bam Margera Gave out the Door Code to His Private Skate Park on Instagram, Hundreds Showed up to Use It

Everyone who follows Bam on Instagram knows over the last year or so, he spiraled into something pretty ugly, not only worrying fans, but also his family and co-stars of Jackass. Despite their eagerness to help, Bam pushed them aside and tried to deal with everything himself, which resulted in some pretty crazy stunts.

Now, Bam seems to be on the up. But his latest antics while being interviewed resulted in complete chaos, with hundreds turning up at his private skate park.

Keep scrolling for the disastrous interview...

Bam was a fan favorite within the franchise.

He was one of the youngest cast members and was loved for his mischevious charm and boyish good looks. But there was another reason that people loved Bam so much - his adorable relationship with best pal, Ryan Dunn.

In 2011, Ryan Dunn was driving under the influence of alcohol and crashed his car in Pennsylvania. There were two fatalities - Dunn, and passenger, Zachary Hartwell.

Since losing his best friend, things haven't been going so well for Bam.

Last year, he hit headlines for all the wrong reasons.

In March 2019, Bam showed up early for an event and discovered that no audience members had yet arrived. But, instead of waiting it out, he absolutely lost it, screaming at his visibly terrified manager in a way that suggested a loss of touch with reality.

After this March outburst, Margera was committed to a facility.

He was checked in for addiction issues and a suspected personality disorder. Reports state that this was against his will and at the insistence of worried family members.

But, since this incident, it appears that things haven't got any better.

His actions have left everyone worried, including his Jackass costars. Although despite their willingness to help, Bam is certain they have ulterior motives.

In his most recent meltdown, Margera was visibly intoxicated at the airport, which resulted in him being forcibly removed from his flight.

And since this outbreak, things only seem to be going downhill... Margera has been letting it all out on his Instagram.

It all started with a screenshot of a text with his ex, Nicole Boyd, with a caption dragging her name through the mud.

Margera posted upwards of fifty horrifying posts, which fans have described as being like "watching a documentary about the last days of someone's life."

Margera then posted some scrawled handwriting denigrating, not only Boyd (with whom he shares a two-year-old-child), but also his own mother, April.

Fellow Jackass star, Chris Pontius, left a heartfelt public comment on the post, saying: "To Everybody asking the Jackass Guys to help Bam, We are trying and have been, but no matter how loudly help screams his name, it’s up him to want to be better and not somebody who publicly degrades their Wife and Mother and takes accountability for it. I wouldn’t write this publicly, but we all get told to go help Bam so much, I might as well answer."

He then continued to post a stream of horrifying videos.

The first was of him at a bar, seemingly absolutely wasted, with a pile of money stacked in front of him.

Another Jackass co-star, Brandon Novak, then reached out.

But Bam was having none of it, screenshotting the message and captioning it, "Novak writes me after how long?"

He then shared the video of him harassing an airline employee.

Margera captioned it: "Where can i find the idiots guide of how to not be dumb for this moron!" Fans disagreed with his actions, though, commenting: "I'm baffled by the lack of respect you radiate... No respect for random people doing their job. No respect for the mother of your child. None for the woman who birthed you. You don't even have respect for yourself. Get help."

Margera was allowed to board the plane with an employee escort but was arrested shortly after for his behavior onboard the flight.

He was escorted to a cop car and seemed oddly excited at the prospect. Turning to speak to the camera, discussing his upcoming plans to meet up with ex-Jackass director, Jeff Tremaine, and go to Comic-Con - but not before meeting a therapist, who was flying out from another state thanks to the nature of his meltdown.

Margera then shared more of his bizarre scrawlings.

One follower commented: "This post = psychosis induced ramblings. Someone’s gonna lock him up soon." Another wrote: "Again with the pretend language... every time your train jumps the tracks you do this. Perhaps there is some real psychosis in there beyond all the booze and drugs." While a third commented: "It's like watching a documentary on someone's last days."

His posts got more and more worrying, with his next sharing a terrifying flow chart.

Brandon Novak commented on this post: "I as well as every other name on ur list are actual “real friends" of yours who truly care about ur well being and quality of life. We WILL NOT condone ur fatal behaviors or justify ur actions in hopes of u not getting angry with us....... I refuse to high five u to ur grave!!!!! I love u and will do whatever it takes to help u so please fucking let me/us."

Then things took an even more frightening turn, he decided to test his followers by sending them a message.

Bam shared a bizarre alphabet of made-up letters in order to send his fans some coded messages. (For those who can't be bothered figuring it out, this one reads: "It is easy.")

He then shared a more complex message, writing: "Find this person and i will not only listen, i will cooperate, understand and agree!! Until then suck on my f*ckin tuna can."

Next, Margera posted another video. In it, he decoded the message of his previous post, claiming that the only doctor he wishes to see in his current mental state is none other than Dr. Phil. One skeptical fan wrote: "So he wants to turn his issues into another chance to be on television? Am I getting that right?"

He first talked about his ex and the mother of his child, Nikki. He claims that she's using his eighteen-month-old baby as "bait" to prevent them from splitting up.

Only then to target his mom, captioning a second video: "Dr. Phil my mom invented a time machine so bam Margera can go now where fast and talk in circles answering questions with questions."

Margera then went on a long video rant.

He first spoke directly to Dr. Phil about the lack of trust that he has in other doctors and rehab facilities, many of which he claimed ended up putting him on more medication. Before turning on Brandon Novak once more, claiming Novak uses his own sobriety to get one up on Bam. Clearly this was all in his head.

Margera breaks through when Dr. Phil saw his frightening Instagram posts which prompted his team to reach out to him.

He shared this manic text exchange with a Dr. Phil showrunner last year. The only positive that we can see is that he's at least in touch with people who are trying to encourage his recovery.

Although his next post suggests that Margera is genuinely struggling.

He captioned this image, "Dr. Phil is the greatest, he secretly flew out nikki and phoenix wolf, had my mom on standby. Got down to thebroot of the problem and isolated it down with no one interupting eeachother. Pr. Phil “bambis not crazy, he is extremely frustrated with certain issues, ban is not crazy!"???nope"

And early reports suggest that the Dr. Phil meeting was a success.

Margera filmed with Dr. Phil in the Paramount Lot, and, afterward, agreed to enter a rehab facility for some intensive treatment for addiction and personality disorders. April and Phil Margera believe that Bam had stopped taking medication for his bipolar disorder, which is what's leading to these massive highs and lows of mood - and his manic outbursts.

It's also reported that relationships are on the mend.

According to reports, Bam's mom, April Margera, Skype called for a mediated conversation with Dr. Phil and her troubled son, and It's claimed that Bam's estranged wife, Nikki Boyd, was actually on hand in person to speak to him and to encourage him to get help.

Lately, things seem to be on the up for Bam.

He has been keeping busy filming the fourth Jackass movie, as well as appearing in his most recent video for Red Bull, titled Skate Tales.

But in the classic Bam style, things got a little out of hand during the interview...

Halfway through, he decides to give out the door code for his private skate park on Instagram, which went about as well as you'd expect...

Madars Apse, the pro skater, traveled to Pennsylvania to meet up with Bam and check out his skate barn.

Bam invited Madars and the Loy brothers, Ethan and David, to check out Philadelphia’s iconic Love Park, where he used to spend a lot of his time, which was followed by a trip to his brand-new indoor park.

The interview starts with an adorable shot of Bam’s 2-year-old son, Phoenix Wolf, who’s attempting to skateboard and show his skills.

He then asked skaters to join him, resulting in absolute chaos...

Later Bam talks about his life and success but mentions that he can’t show any tricks or stunts for the series because he recently pulled a muscle in his calf.

When asked what skateboarding meant to him, he said: “Skateboarding is everything to me cause it got me where I am today. When I stopped skateboarding, I became a raging alcoholic. I’d rather skate because if I don’t skate, I'll die."

Take a look at the episode below...

Over 100 people ended up in the skating barn, showing mad tricks and stunts. We just hope this newfound sobriety will last, and we can start to see more of the real Bam on social media soon. Keep scrolling to take a look at the cast of Jackass now compared to fifteen years ago... Prepare to get emotional.