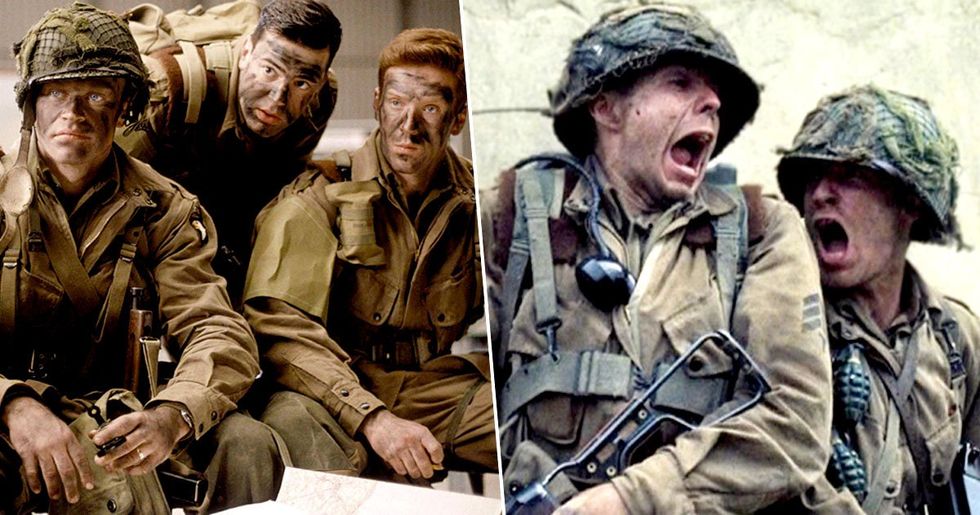 It's official, Band of Brothers is getting a highly anticipated follow up series.

Steven Spielberg and Tom Hanks are both on board for the sequel, having both been key to the original critically acclaimed series which came out 18 years ago.

Read on to learn everything we know about the follow up.

The original Band of Brothers dropped in 2001.

The series, based on true memoirs of WW2, followed 'Easy' Company, 2nd Battalion, 506th Parachute Infantry Regiment, of the 101st Airborne Division. The series begins with the group jump training in the United States, and follows the same characters as they participate in numerous theaters of action in Europe.

The series won many awards.

Produced by Tom Hanks and Steven Spielberg, the show was immediately hailed as a masterpiece - and has achieved universal acclaim globally. It has a gargantuan 9.5 rating on IMDb, 94% Fresh Rotten Tomatoes score, and 8.8 on TV.com. Not only that but Band of Brothers also won seven Emmy's, the Golden Globe for best mini-series, and many other accolades.

The Pacific was produced again by Hanks and Spielberg, and was spearheaded by one of Band of Brother's main writers. As opposed to Band of Brother's focusing on the European front, The Pacific began in the aftermath of Pearl Harbor and followed the Marine's battles against the Japanese in the Pacific Theatre.

The Pacific told the story of three real WW2 soldiers.

The series focuses on three marines, Robert Leckie, Eugene Sledge, and John Basilone who were all in different regiments, the 1st, 5th, and 7th, of the 1st Marine Division. It has a large focus on their involvement and memories of the horrific battles that 1st Marine Division fought, such as Guadalcanal, Cape Gloucester, Peleliu, and Okinawa.

And again, it was adored.

Similarly to Band of Brothers, The Pacific was unbelievably well received. Rotten Tomatoes gave it a stunning 91 per cent and it won the Emmy for Outstanding Miniseries, Outstanding Casting, and Outstanding Art Direction.

It's recognized as one of the greatest series' of all time.

Both Band of Brothers and The Pacific are regarded as some examples of the finest television ever produced. Film critic, Chuck Barney, described it as:

Bursting with epic sprawl and extravagance. But like any effective film of its kind, it also contains a brand of intimacy that will have you bonding with its characters and caring deeply about their fates.

And now, nine years on, we have another series!

Masters of the Air, a follow-up to the critically-lauded HBO war series’, will air on Apple TV Plus exclusively. Apple TV plus is an upcoming streaming platform which is expected to rival competitors such as Netflix and Amazon Prime.

Spielberg and Hanks are on board too.

As reported by Variety, it’s also set to be produced by Steven Spielberg and Tom Hanks who, as we know, featured as the executive producers on Band of Brothers and The Pacific. Something tells me this is going to be a classic.

It's the first Apple series.

Masters of the Air is the first series to be green-lit by Apple TV Plus and the tech giant has put two major figures, Zack Van Amburg and Jamie Erlicht, in charge of making sure things go smoothly.

Masters of the Air is based on a best-selling war book.

Masters of the Air is based on the book by Donald L. Miller and will follow American bomber's in World War II. Miller's book was an authoritative non-fiction best-seller which, based on countless interviews and research, told the story of those who used long range heavy bomber aircraft's to take the war to Hitler's doorstep.

Band of Brother's screenwriters are back.

John Orloff, a screenwriter on Band of Brothers, is said to be penning the script, as well as co-executive producing.

Aside from knowing that Spielberg, Hanks, and Orloff are back - and that the series will follow the so-called Bomber Boys, little more information is currently known. If it's anything like the book then we could be expecting some episodes focusing on the bomber boys in wartime England and in POW camps - where tens of thousands of airmen spent part of the war. However this is all just speculation at the minute.

It's going to be a classic. Going off the best-selling book and with such a fantastic team behind it, it's hard to imagine Masters of the Air will be anything short of fantastic.

Although it isn't known when Masters of the Air will drop, Apple TV Plus begins its services on November 1 2019 in over 100 countries across the world.

The exciting news about Masters of the Air comes shortly after Apple TV Plus reached a major deal with Oscar-winning director Alfonso Cuaron – the man behind Netflix’s Roma and sci-fi masterpiece, Gravity.

The Morning Show and Dickinson are two other shows on the platform.

The streaming service is going to be cheap.

In a further attempt to dethrone Netflix and other streaming Behemoth's the streaming service will only cost $4.99 per month with a seven day free trial.

If you purchase an Apple device you'll get it for free.

According to Digital Trends, if you purchase any iPhone, iPad, Apple TV, iPod touch or Mac you can enjoy a year of Apple TV Plus for free.

Apple think it will be 'the best'.

With Apple TV +, we present completely original stories of the best, brightest and most creative minds, and we know that viewers will find their new favorite show or movie in our service. Each Apple TV + original offers its own unique story, a fresh perspective and a powerful message, all to entertain, connect and inspire cultural conversations.

Going off their own comments and the hype around Masters of the Air, we're certainly excited to see the impact Apple TV Plus will have on the industry.