Here’s how the former president now spends his time. | 22 Words 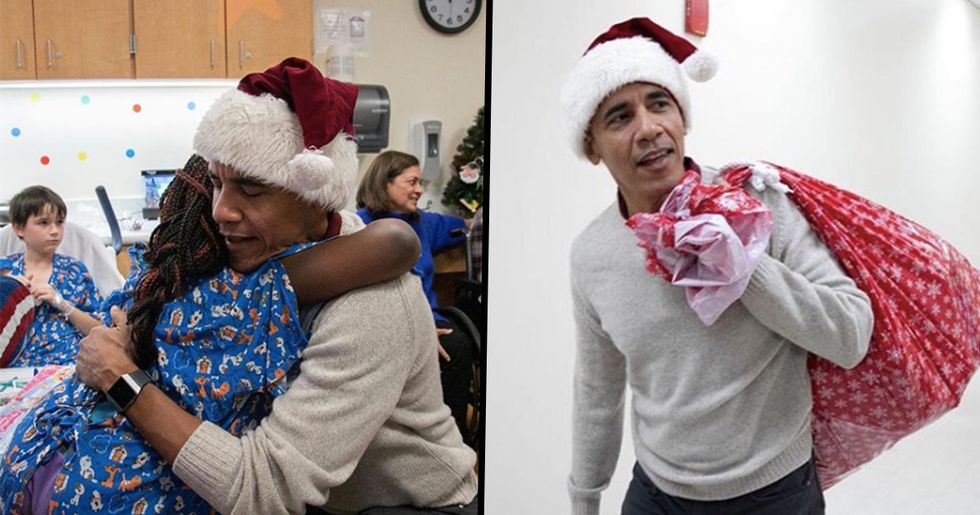 We all know Barack Obama is a cool guy, and one of the best presidents we have seen in our lifetime so far. Not only was he kind, supportive of the LGBT+ community and genuinely a cool guy – he knows Beyoncé after all, he also demonstrated that he was also just a stand-up guy. Recently he displayed this even further when he decided to go into a children’s hospital, dressed in a Santa hat, and deliver presents to the sick patients.

Here’s how the former president now spends his time.

On Wednesday, Obama spent his day by going into Washington’s Children’s National Hospital and spreading some festive cheer.

He even went wearing a Santa hat.

Known for his style and flare, the former president also went in wearing a Santa hat – just showing how cool and festive he can be.

He was greeted with excitement.

Footage of the day shows an excited crowd of patients and workers greeting Obama by singing Christmas carols and asking for selfies.

Obama, a father of two, was thrilled to meet the brave children at the hospital and was glad he could provide some Christmas cheer for them and their families.

An excellent use of Twitter, for sure. What a lovely message from the former president.

He also met each patient individually.

Obama also spread out his time so he had a chance to talk to each child individually.

And he brought presents.

He also then bestowed each of them with a gift, such as jigsaw puzzles, hot wheels and glitter nail polish.

He then recorded a video message.

Obama understood that maybe some patients who couldn’t be there had missed out, so he recorded a video message for them to enjoy instead.

Also he is rocking that hat!

Santa Obama you are too good for this earth.

He’s such a good guy!

I think we can all appreciate Obama and his good deeds, proving again why he was one of the coolest guys ever to be president. Merry Christmas to the whole Obama family – you deserve it!