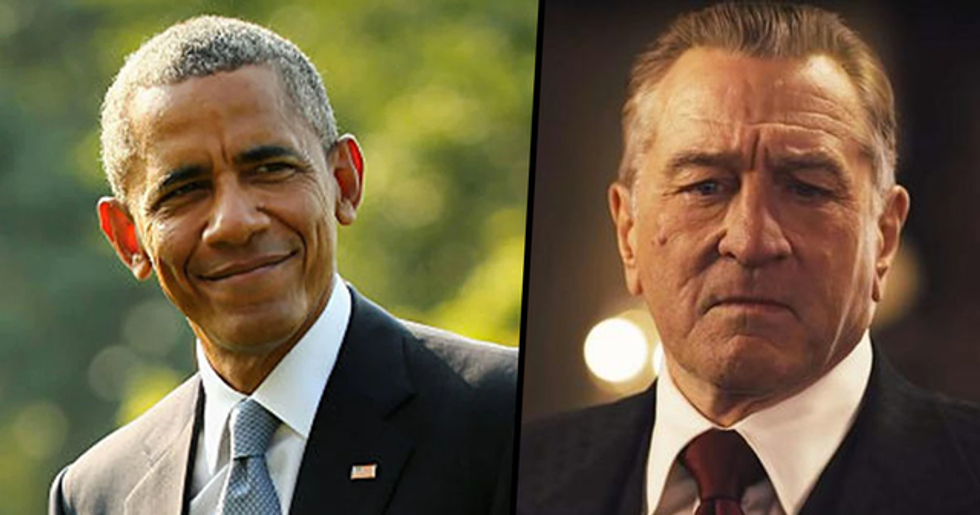 Barack Obama is more than just one of the most beloved presidents in history - he's also indisputably cool. And to prove it, he's shared his top movies of 2019. As you may expect, the list features some of the most critically acclaimed, sophisticated indie flicks of the year. Did your 2019 favorite make the exclusive list?

But Obama is still in our hearts.

He just seems to be an all-around cool guy!

And his latest move proves just that.

Because Obama has shared a list of his favorite movies from 2019 - and it's undeniably cool. So without further ado, let's get started!

This documentary was actually produced by the Obamas' studio - so it's not surprising it made the cut.

It focuses on the shutting down of US factories.

Or, as IMDB puts it, "In post-industrial Ohio, a Chinese billionaire opens a new factory in the husk of an abandoned General Motors plant, hiring two thousand blue-collar Americans. Early days of hope and optimism give way to setbacks as high-tech China clashes with working-class America."

Another documentary - this time about the icon that is Aretha Franklin.

The movie is filmed over 2 nights of live performance.

IMDB calls it, "a documentary presenting Aretha Franklin with the choir at the New Bethel Baptist Church in Watts, Los Angeles in January 1972."

It seems Obama is a documentary fan - as this is the third on his list.

This one tells the story of one particular mission.

IMDB's description reads, "a look at the Apollo 11 mission to land on the moon led by commander Neil Armstrong and pilots Buzz Aldrin and Michael Collins."

This Chinese movie is a little-known addition to the list.

It's essentially a romance.

This French drama is directed by Mati Diop - the first woman of color to compete in the Cannes film festival.

"In a popular suburb of Dakar, workers on the construction site of a futuristic tower, without pay for months, decide to leave the country by the ocean for a better future."

"Among them is Souleiman, the lover of Ada, promised to another," says IMDB.

This crime drama deals predominantly with the drug trafficking industry.

But the movie is also surprisingly beautiful.

"During the marijuana bonanza, a violent decade that saw the origins of drug trafficking in Colombia, Rapayet and his indigenous family get involved in a war to control the business that ends up destroying their lives and their culture," writes IMDB.

This indie comedy became a cult hit over the past year.

It's essentially a female buddy comedy.

"On the eve of their high school graduation, 2 academic superstars and best friends realize they should have worked less and played more. Determined not to fall short of their peers, the girls try to cram four years of fun into one night," says IMDB.

This Brazilian drama truly tugs at the heartstrings.

"Diane fills her days helping others and desperately attempting to bond with her drug-addicted son."

"As these pieces of her existence begin to fade, she finds herself confronting memories she'd sooner forget than face," as IMDB puts it.

This comedy has a surprisingly big heart.

It starts on a distinctly unfunny premise, though.

IMDB says, "a Chinese family discovers their grandmother has only a short while left to live and decide to keep her in the dark, scheduling a wedding to gather before she dies."

This movie is based on the real story of Le Mans in 1966.

It has an all-star cast.

IMDB's description reads, "American car designer Carroll Shelby and driver Ken Miles battle corporate interference, the laws of physics and their own personal demons to build a revolutionary race car for Ford and challenge Ferrari at the 24 Hours of Le Mans in 1966."

This Scorcese epic is the longest movie on the list.

It's another movie with an impressive cast.

And according to IMDB, the movie deals with "a mob hitman who recalls his possible involvement with the slaying of Jimmy Hoffa."

Another movie based on a true story, this gets into the problems of the U.S. justice system.

It stars Michael B Jordan.

It stars Jimmie Fails, who also co-wrote the movie.

The film focuses on many social issues.

"A young man searches for home in the changing city that seems to have left him behind," summarises IMDB.

This Greta Gerwig remake of the Louisa May Alcott classic has had rave reviews.

It has a really amazing cast.

Florence Pugh, Emma Watson, Saoirse Ronan, and Meryl Streep all take on roles in this classic coming of age drama.

This movie quickly became the subject of many memes - but it's also incredibly well-acted.

"Noah Baumbach's incisive and compassionate look at a marriage breaking up and a family staying together," IMDB says.

"Jobless, penniless, and, above all, hopeless, the unmotivated patriarch, Ki-taek, and his equally unambitious family--his supportive wife, Chung-sook; his cynical twentysomething daughter, Ki-jung, and his college-age son, Ki-woo--occupy themselves by working for peanuts in their squalid basement-level apartment."

"Then, by sheer luck, a lucrative business proposition will pave the way for an insidiously subtle scheme, as Ki-woo summons up the courage to pose as an English tutor for the teenage daughter of the affluent Park family."

"Now, the stage seems set for an unceasing winner-take-all class war. How does one get rid of a parasite?"

The movie spans genres of crime, drama, and romance.

"A young film student in the early '80s becomes romantically involved with a complicated and untrustworthy man," writes IMDB.

It's a thrilling watch.

"A man attempting to escape Nazi-occupied France falls in love with the wife of a dead author whose identity he has assumed," reads the description. Obama also shared some of his favorite TV shows.

Phoebe Waller-Bridge's comedy took the world by storm this year.

It's as hilarious as it is heartbreaking.

"A comedy series adapted from the award-winning play about a young woman trying to cope with life in London whilst coming to terms with a recent tragedy," says IMDB.

This drama is based on a true story and discusses the issues of how rape is dealt with in the USA.

"Based on the true story of Marie, a teenager who was charged with lying about having been raped, and the two female detectives who followed the path to the truth," IMDB reads.

This action drama is a unique take on the superhero genre.

IMDB says, "set in an alternate history where masked vigilantes are treated as outlaws, Watchmen embraces the nostalgia of the original groundbreaking graphic novel of the same name, while attempting to break new ground of its own."

But as many have pointed out, it seems weirdly light on Netflix movies - particularly considering it's the streaming service the Obamas partnered with for their movie! Want to know more about Barack and Michelle? Scroll on for a look around their incredible new holiday home.