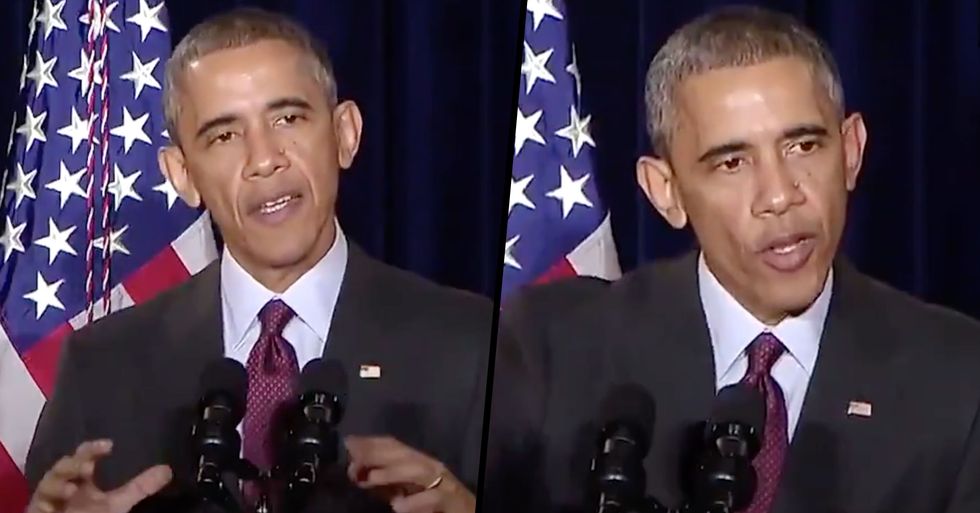 We are living in strange times and we have no idea when things will return to normality.

But it seems that this global pandemic was predicted many years ago by not only one former president of the United States... but 2.

Keep scrolling to hear what Barack Obama had to say in 2014...

World leaders have been left with little choice but to bring their countries to a total stand-still.

Thanks to the rapid spread of the deadly virus, many countries are now in complete lockdowns and life as we know it is no more.

Since the first patient was diagnosed in Washington, there have been over 400,000  more confirmed cases across the country.

Last month, President Trump declared a national emergency to combat the pandemic, freeing up $50 billion in federal funding and promising a screening website and drive-by tests.

But despite the tireless work from researchers...

Clive wasn't the only one...

Kylie Jenner also donated the generous sum of $1 million to help fight the virus. Her money will go towards providing face masks and other essential equipment.

There was then another surprise donation...

And Microsoft founder Bill Gates is the latest in the list of generous donations...

"Thank you to all of the health care workers who are making heroic efforts to test and treat patients across the United States and the world." The Gates Foundation has offered up a donation of a staggering $125 million to help find a treatment for the virus.

But as generous as these donations are...

The crisis continues and panic doesn't seem to be easing - with a big thanks to the internet, of course.

The internet has had all sorts of ideas and theories about the virus...

But footage of our former president, George Bush, has gotten everyone talking.

And it shows Bush giving a speech about pandemics.

He described a pandemic as a fire.

"If caught early it might be extinguished with limited damage. If allowed to smolder, undetected, it can grow to an inferno that spreads quickly beyond our ability to control it," he said.

He stressed the importance of being prepared for the unknown...

"But if we wait for a pandemic to appear it will be too late to prepare. And one day, many lives could be needlessly lost because we failed to act today."

This is surely a coincidence...

But people online saw it as a warning - which, of course, freaked many of these spectators out.

And now, it seems that Bush wasn't the only former president to make a scarily accurate prediction.

Footage has emerged of Obama from 2014 when he was in office...

And in similarity to Bush, he is talking about being prepared for the worst.

He began by talking about putting in place an infrastructure...

He warned that we, as a country, need to be ready.

"So if and when a new strain of flu, like the Spanish flu, crops up 5 years from now or a decade from now, we've made the investment and we're further along to be able to catch it."

He called for more pandemic preparedness...

"The funding we're asking for is needed to keep strengthening our capacity here at home so we can respond to any future Ebola cases," he explained. "It's needed to help us partner with other countries to prevent and deal with future outbreaks before they become epidemics." It is scary how accurate this is.

Obama stressed the importance of working with other countries... as a team.

"We're lucky with H1N1 that it did not prove to be more deadly. We can't say we're lucky with Ebola because obviously it's having a devastating effect in West Africa, but it's not airborne in its transmission," he said. "There may and likely will come a time in which we both have an airborne disease that is deadly - and in order for us to deal with that effectively, we have to put in place an infrastructure - not just here at home, but globally."

Things would have been so different if preparations had been made all of them years ago.

"So this is important now, but it's also important for our future."

Obama's words are nothing but sincere and wise...

And people have been calling for President Trump to take a good, hard listen to these words.

Obama has been praised as being "conscious and respectful"...

@nowthisnews I miss having a conscious and respectable president (that carried and articulated himself as such) https://t.co/bCwmJwOJ15
— NS (@NS)1586386456.0

And we must admit, we miss him a little bit too!

We are now paying the price for not listening.

Watch the speech for yourselves here.

Make sure to keep scrolling for the most recent pandemic news...