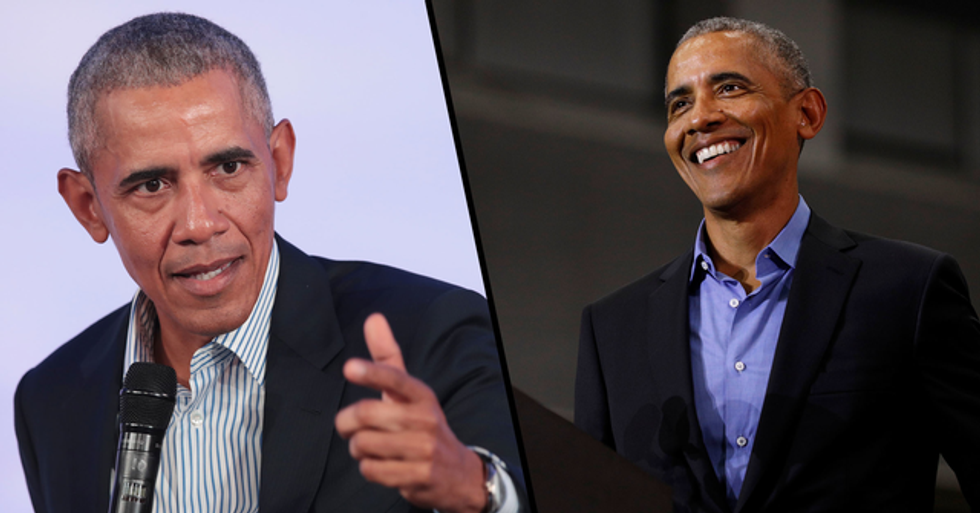 The former POTUS, Barack Obama, has proven his feminism and overall "girl power" attitude by admitting that women are "better" than men, and would make better world leaders. Nicely put, Obama...

Barack gave strong words at a private conference on leadership in Singapore, but they have since left people divided.

Barack Obama was one of our country's most beloved Presidents.

And he carried these values throughout his Presidency...

And, in more recent news...

Obama addressed his views on the current leadership of the world.

The former POTUS recently spoke at a private event on leadership in Singapore...

And he had some interesting thoughts on how the world can be better run.

Obama had some strong words...

And he opened up about his thoughts on a female-run world.

Back in 2018, while speaking at a town hall meeting in South Africa, Obama called for more women to get involved in social movements as "men have been getting on my nerves."

It turns out that Barack is all for that girl power.

As per The Hill, Obama explained: "Women, in particular, by the way, I want you to get more involved. Because men have been getting on my nerves lately. I mean, every day, I read the newspaper and I just think like, brothers what’s wrong with you guys? What’s wrong with us?"

So, quite evidently, Obama has a lot of faith in us women...

And he recently admitted that he believes if women were in power, the world would see more stability and a general improvement in living standards.

And he scolded some of the world's older male rulers...

And said that they are "not getting out of the way". Donald, Boris, we're looking at you...

Obama believes that women are the answer...

And that they are "indisputably better than men." You're making us blush, Barack...

"Now women, I just want you to know; you are not perfect, but what I can say pretty indisputably is that you’re better than us [men]."

He believes that women are the answer to the world's most critical issues.

"I’m absolutely confident that for 2 years if every nation on earth was run by women, you would see a significant improvement across the board on just about everything… living standards and outcomes."

And this is one of the many reasons he isn't re-entering the world of politics.

In his lengthy speech, Obama outlined that leaders need to step aside when the time is right and that this is one of the reasons why it's so difficult for women to have a place in this leadership.

The future is young.

And Obama believes that the older leaders need to get out of the way. "If you look at the world and look at the problems it’s usually old people, usually old men, not getting out of the way. It is important for political leaders to try and remind themselves that you are there to do a job, but you are not there for life, you are not there in order to prop up your own sense of self-importance or your own power."

Most people agreed with what Obama had to say...

@ABC Men and women are equals and we allow ourselves to be divided by the differences and opinions given and spoken… https://t.co/5iGC8JQwVR
— Crow (@Crow)1576514535.0

But many slammed him for being so gendered specific, pointing out that gender simply shouldn't be ruled as a factor in the world of politics. I personally think he's just tired of the state the current male leaders have left the world in... Who can blame him? For more on Obama and his overall wonderfulness, keep scrolling...