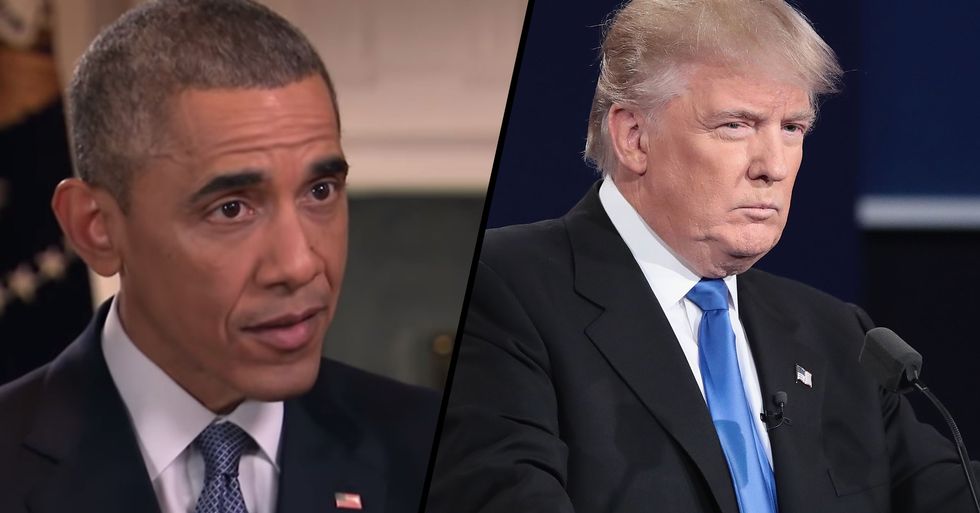 It's safe to say that since the coronavirus outbreak, Trump has had his fair share of critics for the way he has handled the entire situation.

Now, it seems former president, Barack Obama, has uncharacteristically weighed in on the issue, taking an unprecedented swipe at Trump and it was pretty savage, to say the least.

Keep scrolling to see his brutal comment as well as reactions from everyone that saw...

Trump hasn't exactly been praised for his handling of the medical crisis.

And, like the other world leaders have all been doing, has been encouraging his citizens to band together and support one another. However...

Right now, the U.S. has the most cases of the virus in the world.

And the news came just days after President Trump said he wants the nation "opened up and just raring to go by Easter."

Trump has repeatedly expressed how eager he is to lift lockdowns within a matter of a few weeks...

Despite warnings from experts and doctors that if the nation returns to work, COVID-19 cases could spike once again.

Although, once again, it didn't take him long to backtrack.

He admitted that the Easter deadline was "aspirational" and of course, won't be happening.

And his stance on the matter seems to have riled a lot of people up.

Including, it seems, former president, Barack Obama, who chimed in on the topic this week.

This is an unusual move...

Considering Obama rarely ever weighs into the work of other presidents - mostly using his Twitter account to praise frontline workers and share advice from public health experts. His brutal comment, which you can see if you keep scrolling, sparked outrage amongst people on either side of the argument.

So many people chimed into the issue after seeing Obama's tweet.

The debate got pretty heated, as you'll see. This Republican had some harsh words for the former President.

Apparently Obama went golfing during the previous pandemic? Does anyone else remember or id it just this guy?

And this user made things personal...

Someone else replied to the comment claiming it was a 40 million dollar mansion.

What people fail to understand is that the current President isn't controlling the virus...

The virus controls him! The US currently has the highest rate of infections.

The haters came in numbers...

And the continued attacking Obama.

China has its part to play in this...

@BarackObama America under Trump has the cleanest air and water in the world But just like this pandemic, the bigg… https://t.co/P6lDlVEu2F
— Rogan O’Handley 🇺🇸 (@Rogan O’Handley 🇺🇸)1585670942.0

But so does the United States, there's no denying it.

This user had been keeping tabs on Obama for a while... clearly.

Even his meals? That's kind of creepy.

Others claimed that Obama was trying to promote his own agenda...

We're not learning anything from this pandemic, are we?

He is not currently our President, but people are still blaming him for these issues...

They are Trump's issues.

No one knew it was coming... But Trump ignored the warnings.

We've known since January but only locked down in March? Messy.

"Does anyone even care?"

You're about to have bigger problems on your hands if you don't.

Others pointed out some facts.

This user posted a picture to convey his opinion.

Some people still refer to Obama as "President..."

Do you think Barack Obama would have done a better job?

Because people don't think Trump is doing too well...

@BarackObama Trump’s ignorance is killing people. Voting the sociopath out of office will save lives. Vote this fal… https://t.co/7uZi0cHtLH
— Chidi®️ (@Chidi®️)1585668364.0

Well, he did talk about his hair being real during a COVID-19 briefing if that's anything to go by.

Now, people are rallying together to get rid of the current President in the election.

@BarackObama Thanks Mr. President! We need to roll Trump back in the next election. Our future is at stake.
— Angela Belcamino (@Angela Belcamino)1585668620.0

The election might not even happen due to the pandemic.

Some people even resorted to begging for help...

It seems as though the nation is living in fear.

And as more and more people continue to get infected...

@BarackObama Thank you for reemphasizing this. The current administration has been downplaying that crisis too and… https://t.co/WC91eYsKie
— Ibrahim (@Ibrahim)1585762530.0

And as the election continues to loom over us, Obama warned us to make the right decisions.

It seems as though this issue was very important to the former President.

Obama tweeted about the matter on Tuesday.

If you're looking for more information on how the pandemic has affected our country...

Then keep scrolling as we've compiled a list of some of our favorite shows that have been postponed or canceled due to the pandemic.