Obama then addressed those who are still undecided on who to vote for... | 22 Words 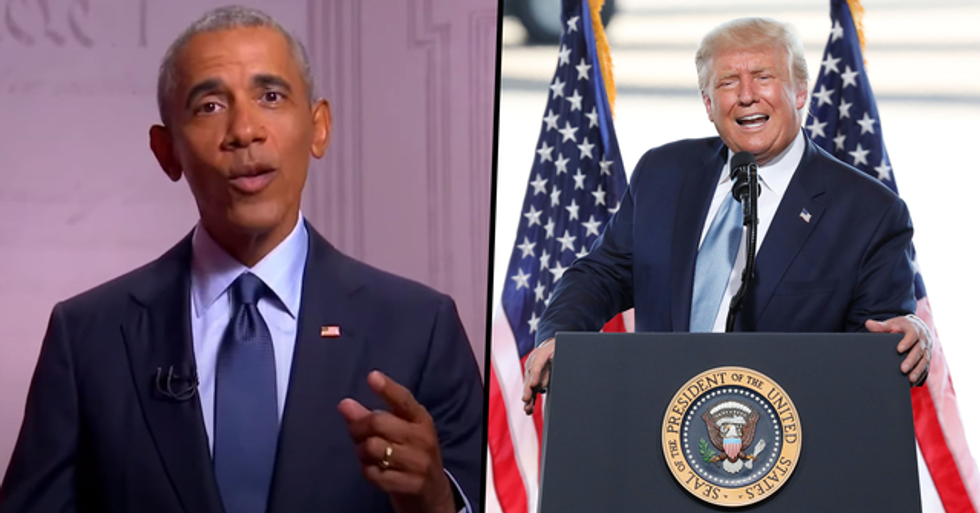 In his recent democratic convention speech, former POTUS, Barack Obama, took a not-so-subtle swipe at President Donald Trump, who responded in the most Trump way possible...

Following on from his wife's highly-publicized stab against President Trump, Obama has unleashed his own scathing attack against the president.

In his speech, which was conducted at the Democratic National Convention...

Obama discussed a variety of current affairs, including his close relationship and support for Trump's presidential rival, Joe Biden.

But his speech took a somewhat darker tone...

When he arrived on the topic of America under a Trump presidency.

Because, like many, Obama hasn't been impressed with Trump's performance in the White House...

And he certainly let his opinions on the matter be heard in his scathing speech.

Now, Obama knows what he's talking about when it comes to running a country.

The first-ever African-American POTUS started his career in politics as an Illinois senate who focused on the legislation on ethics, as well as the expansion of health care services and early childhood education programs for the poor.

And he carried these values throughout his Presidency.

Obama cut taxes for working families, small businesses and first-time home buyers, and he stuck to his promise of tackling financial reform, alternative energy, and reinventing education and health care.

And he gained a strong and loyal fan base as a result of his progressive views on social issues such as same-sex marriage and gun control.

And this brings us back to his latest speech.

While speaking in support of the current democratic candidate, Joe Biden, Obama had some stern words regarding Trump's handling of the pandemic, as well as his overall leadership of the country.

He didn't hold back.

Speaking about the moment Trump was sworn into office, Obama explained: "I never expected that my successor would embrace my vision or continue my policies. I did hope, for the sake of our country, that Donald Trump might show some interest in taking the job seriously; that he might come to feel the weight of the office and discover some reverence for the democracy that had been placed in his care."

Obama went on to express his disappointment in Trump's failure to show "no interest in putting in the work, no interest in finding common ground; no interest in using the awesome power of the office to help anyone but himself and his friends, and no interest in treating the presidency as anything but one more reality show that he can use to get the attention he craves." I told you he didn't hold back.

And, even more bluntly...

He said that he believes Donald Trump hasn't grown into his role as POTUS.

Without hesitation, he laid the statistics bare.

"The consequences of his failure are severe. 170,000 Americans dead. Millions of jobs gone."

He expressed his dismay over America's ruined reputation.

"Our worst impulses unleashed, our proud reputation around the world badly diminished, and our democratic institutions threatened like never before."

Obama then addressed those who are still undecided on who to vote for...

By leading into the topic of Joe Biden, who he believes can "lead this country out of dark times and build it back better."

He finished his speech with one resounding plea:

"No single American can fix this country alone. Democracy has never been so transactional - you give me your vote, I make everything better. So I am asking you to believe in your own ability - to embrace your own responsibility as citizens - to make sure the basic tenets of our democracy endure. Because that's what's at stake right now. Our democracy."

Of course, his speech has been met with an array of reactions...

But how did President Trump respond?

Well, he reacted in the only way he knows how.

Slowly, the angry and, of course, capitalized Tweets started to roll in (much to the amusement of many Twitter users).

The president was not happy.

He angry spat out: "WHY DID HE REFUSE TO ENDORSE SLOW JOE UNTIL IT WAS ALL OVER, AND EVEN THEN WAS VERY LATE? WHY DID HE TRY TO GET HIM NOT TO RUN?"

Maybe Trump could take a lesson or two on grace and decorum from his predecessor?

You can watch Obama's full speech above. For Michelle's speech, keep scrolling...