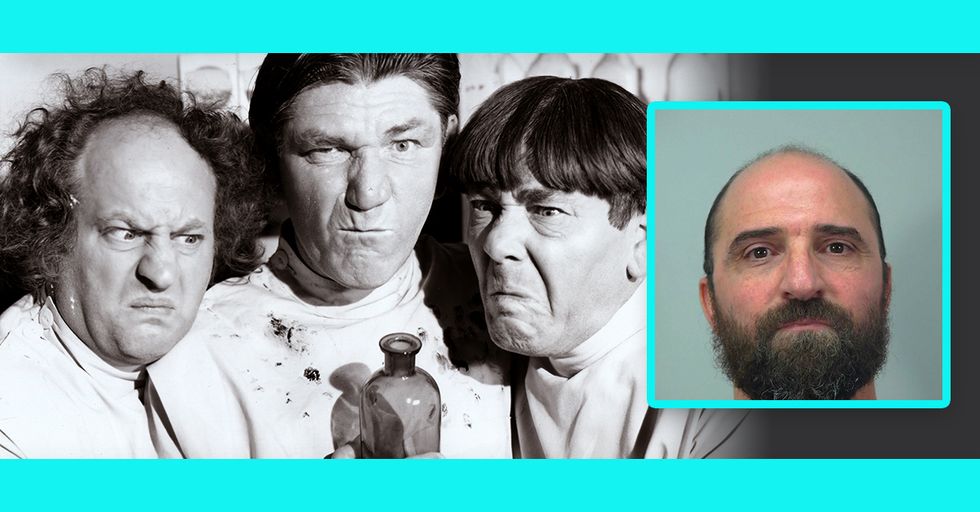 A classic of American vaudeville, the comedy trio of Moe, Curly and Larry delighted audiences from 1934 to 1946 with their peculiar brand of slapstick humor. Americans tuned in regularly to watch the over 90 short films the trio made for Columbia, which mainly consisted of them verbally and physically assaulting one another.

It might shock you to know that there were actually six stooges in all. The most popular stooges were the aforementioned Moe, Curly, and Larry, but the original group consisted of Ted Healy and the other three.
Moe's brother, Shemp Howard joined the group, but left to pursue a solo career, and Joe Besser was replaced by Joe DeRita.
All this is a bit of interesting trivia to say that the stooges had staying power. Even as the cultural climate changed and the 1920s became the 40's, 50's and 60's the stooges remained dominant.
Even now, well into the aughts, everyone still knows who they are, or remembers an image of a pie being thrown in someone's face. The stooges were the height of American comedy. They changed the way comedians used their bodies forever.
Even more importantly, their images remained ingrained in the American psyche. There was Larry's curly hair, Curly's bald head and oversized hat, and Moe Howard's distinctive bowl cut.
Of all the three stooges, however, Larry had arguably the craziest hair. It was bald on top and bushy on the sides, and whenever he got Joe upset, the other Stooge would rip out a handful of his hair.
One barber in Madison, Wisconsin, apparently, thought that Larry's haircut was the height of fashion, because he gave it to one unwitting client this week, much to the client's dismay.
Khaled A. Shabani, 46, was attending to a 22-year-old client's hair, but the client would not stop moving. Exasperated, Shabani delivered a verbal warning.

Police arrested a hairstylist after he gave a customer a very unwanted hairdo, “leaving him looking a bit like Larr… https://t.co/wfQbboUfbx
— WTOP (@WTOP)1514483460.0

When that did not change anything, Shabani took matters into his own clippers, first nipping the restless client's ear, then shaving him straight down the middle, a la Larry of the Three Stooges.

The client was not amused, because officers soon arrested Shabani for disorderly conduct. The barbarous barber pled not guilty, claiming it was an accident, but in matters of hair and comedy, who knows precisely what's what. We're just going to guess that somewhere up there, Larry is laughing at the whole thing... Nyuck, nyuck, nyuck!!!