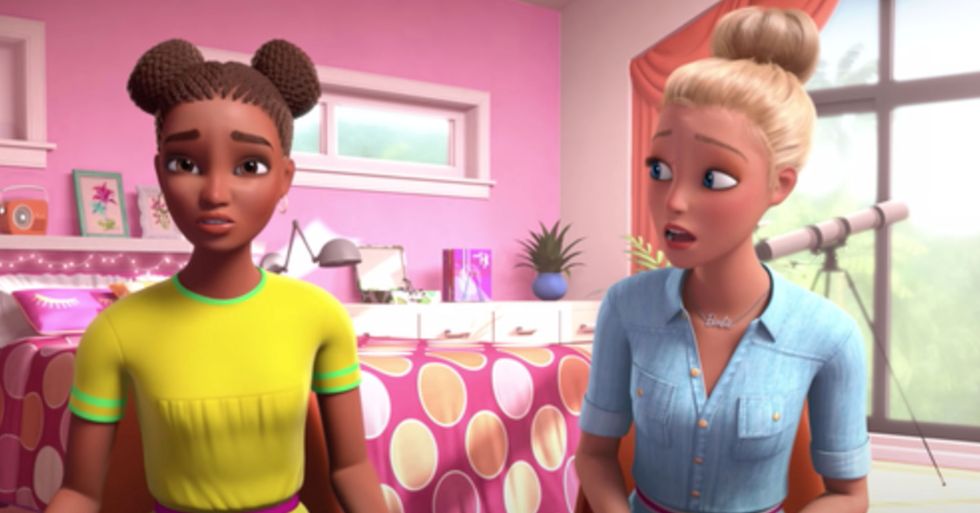 Despite Barbie's problematic history when it comes to body image and lack of diversity, it seems as though things are starting to change.

And her latest youtube vlog, which addresses white privilege, has Twitter rooting for this new and improved Barbie.

This past week, Barbie has been laying down some serious facts that we could all do with learning...

And her latest video surrounding the black lives matter movement has got everyone talking.

@fentytannies @hopealwayz_ im gonna show my kid barbie instead of that cinderella shit... actually no disney for my kid
— AM⁷ vote on sma (@AM⁷ vote on sma)1602094073.0

@fentytannies @CarmenKingy Its good that they made this so little girls and boys can understand and be aware of wha… https://t.co/NFXCyA8GvK
— Animal😂🤣 (@Animal😂🤣)1602096648.0

Although Barbie hasn't always been viewed as the best role model, in fact, she's had a pretty problematic history.

People have been calling to see a more diverse Barbie.

Barbie is now available in a range of different ethnicities...

And a range of different, yet realistic, body shapes that represent all types of women.

The doll even caters to a variety of different religions.

And, last year, the first Barbie doll featuring a disability was unveiled.

This boost in diversity has proven to work wonders for Barbie...

And she isn't slowing down anytime soon.

This past week, Barbie uploaded a video with her friend Nikki to her Youtube channel, discussing a hot topic on all our minds recently, the Black Lives Matter movement.

Barbie has a YouTube-style vlog that reaches over 9.7 million subscribers and is run by the official brand.

It always seems to be trending on TikTok and Twitter, due to its witty content and views on important subjects.

In her most recent video, she starts by addressing the importance of the BLM marches and the movement in general, saying, "this stuff isn't easy to talk about, which is exactly why we have to talk about it."

Nikki then takes the stage to talk about what she's experienced as a black woman, that white people just wouldn't have to tolerate.

She talks about 2 different occasions where she has had to deal with racism, in a way that children and adults alike will understand. And discusses a time where she scored high on her french exam, resulting in her teacher telling her she "got lucky." And another where Nikki and Barbie were selling stickers on the beach only for Nikki to be stopped by security 3 times, while Barbie got away with it.

When Barbie asks, "Why didn't you stay in the [French] club and prove him wrong?"

Nikki explains, "Usually when I talk about these things, people make excuses. They say things like, 'Well, maybe you should have had a permit for selling on the beach.' But those are just excuses. People did these things because I was Black, and they made the wrong assumptions about me."

They both explain white privilege isn't just being handed more opportunities, but also not having to "prove people wrong" or defend yourself before you've been given a fair chance.

Nikki notes that the best thing people can do is "listen" and "be supportive." As well as supporting the movement.

Addressing these topics on a kids' channel is the perfect place to start teaching and explaining these often overlooked but essential subjects.

Shoutout to Nikki and Barbie for being pretty amazing role models! Keep scrolling for more on Barbie's gender-neutral dolls...