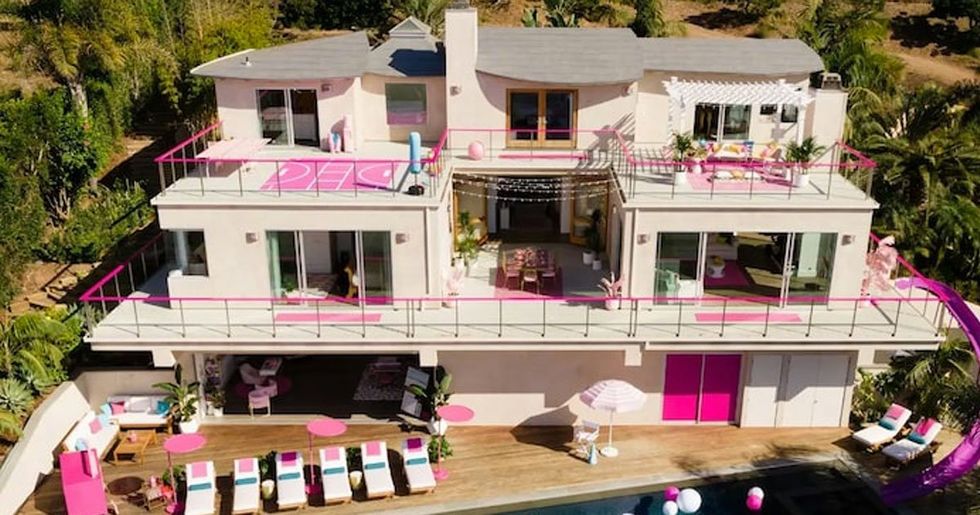 In recent years, Airbnb has really taken off - and with good reason. Not only does it allow us to save a huge amount of cash in comparison to overpriced hotels, but the Airbnb also appeals to the nosey parker in us all. The idea we get to have a peek around someone else's home is just a little bit exciting, no matter how much we try to deny it.

But the latest home to hit Airbnb offers more of a feast for the eyes than most. The Barbie-themed home in Malibu (where else?) has taken the internet by storm thanks to its incredible - and incredibly kitsch - decor. Fancy a peek inside? Read on.

In the past, there were limited options for vacation accommodation.

If you were traveling, you had little choice apart from to stay in a hotel.

And while a hotel stay is a lovely luxury ...

There's one major downside. Many tend to have prices leaning toward the extortionate side - making travel essentially unaffordable for many.

Until Airbnb, that is.

Founded in 2008, the online travel accommodation marketplace has absolutely revolutionized the industry. Through the site, anyone can book affordable lodging pretty much anywhere on earth.

And alongside the lowered price tag?

There's another undeniable advantage. While hotels tend to be rather generic, staying in someone's home is always an aesthetic surprise. But one truly out-there Airbnb has hit headlines this week for its incredible decor.

Let's start with the bathroom.

We can imagine enjoying a relaxing bath in here, no problem at all.

And how about the dining room?

This looks like a grown-up version of a toy home, and we're totally here for it.

Can we talk about the pool?

We can totally picture Barbie chilling out here.

An absolute dream come true - although we doubt you'd actually be allowed to go wild playing dress up.

The house has been listed for a limited time to commemorate the sixtieth anniversary of the Barbie brand.

The whole home is really something else.

It's located in the heart of Malibu, making it the most genuine Barbie experience possible.

This is a totally incredible opportunity to live out a total childhood fantasy.

And what an amazing weekend getaway it would make.

The dreamhouse has two beds and two baths, so could be a perfect friend trip or couple's getaway.

The home has long existed to celebrate Barbie's legacy.

But it has never been open to the public before - until now.

The images are a total feast for the eyes.

The dreamhouse is only open for two nights - and then it'll go off the Airbnb site again, perhaps forever.

The kitchen is similarly dreamy.

If we were to stay here, we don't know which room we'd want to spend the most time in.

These are the most "Barbie" book titles we could possibly imagine, too. Attention to detail is key!

Even more incredible? The dreamhouse costs just $60 per person per night - which for Malibu is basically unbelievable.

The listing is for four people.

So gather your most Barbie-obsessed friends and enjoy the getaway of your life.

You'll know that there's no other fan on earth who's had the same exclusive experience as you!

You better get moving. The listing will open at 11 am PT on October 23rd - and it's expected to be highly competitive. Curious about other Airbnbs with incredible themes? We've collated a list of the best - just scroll on.