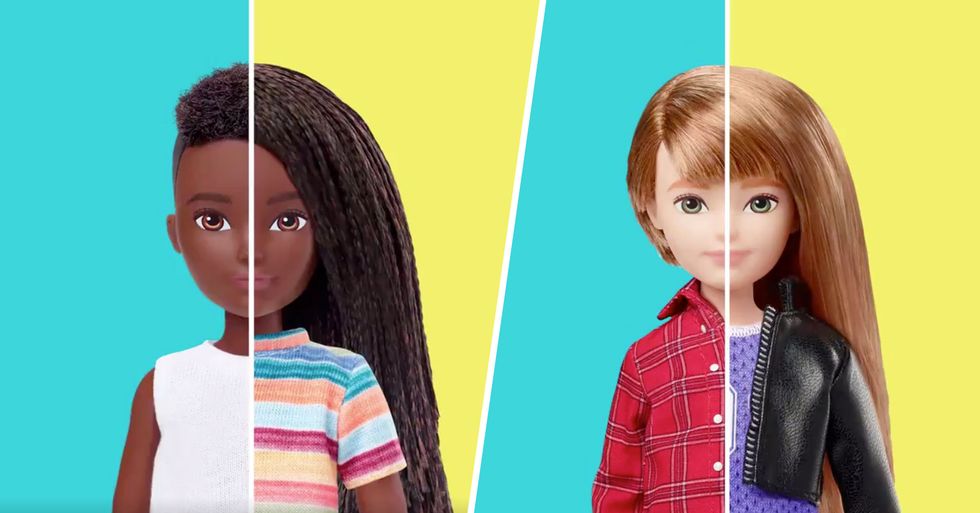 When you think of progressive children's toys, Barbie is probably not the first item which springs to mind. But in spite of a super-controversial past, including criticisms about her unattainable body and her superficial interests, Barbie has had something of a makeover in recent years.

After Barbies of more inclusive body types, races, and careers have received positive press, it seems Mattel is fully on the progressive train. And their latest launch - a Barbie who is gender-neutral, complete with two outfits and hairdos - has got the whole internet talking.

Manufactured by Mattel, Barbie was first launched in 1959.

The doll was pioneering at the time, as Barbie wasn't a baby but an aspiration teen, complete with grown-up clothing and a suspiciously feminine figure.

Over the years, Barbie has been subject to a lot of controversies.

Many parents were upset not only about Barbies unrealistic body but her shallow interests. Barbie was seen as representative of vapidity, and her homogenized appearance was seen as damaging to young girls.

In recent years, Mattel has taken steps to deal with the controversy.

In 2016, the company launched a range of Barbies with more diverse body types - including a selection of dolls with "curvy" figures.

Along with a fuller figured Barbie, Mattel also released "petite" and "tall" counterparts.

And the innovations didn't stop there.

In 2017, Mattel released a Barbie based on Ibtihaj Muhammad, complete with a hijab and a fencing uniform.

And their 2019 range was the most inclusive yet.

The reception of this collection was hugely positive.

Seeing Barbies representative of more types of kids is undeniably a good thing. But the latest move by Mattel may be their most progressive yet.

Because the latest Barbie innovation?

The new release of dolls are all gender-neutral - or, as Mattel are phrasing it, "gender inclusive."

Each doll comes complete with a range of clothing options.

The dolls are designed to be totally "free of labels," meaning they have both masculine and feminine clothing, plus long or short hairstyles.

And the company has done their research.

The dolls have been physically designed to have neutral features, and pediatricians were consulted in order to make them as accurate as possible.

A pediatrician was also consulted on how gender affects play.

"A collection like this just knocks down every barrier to play. Through research, we heard that kids don't want their toys dictated by gender norms," says Dr. Cara Natterson.

"Toys are a reflection of culture and as the world continues to celebrate the positive impact of inclusivity, we felt it was time to create a doll line free of labels."

The dolls also encourage the children to feel freer in their expression.

Each doll comes complete with a range of wigs, different clothing options, and even accessories to allow a child to customise their toy pal.

Dr. Natterson talks of the importance of healthy play.

"This line allows all kids to express themselves freely which is why it resonates so strongly with them. We're hopeful Creatable World will encourage people to think more broadly about how all kids can benefit from doll play."

Here's a selection of the dolls.

The campaign images expertly show how they can be customized to express gender in different ways.

Here's a look at one of the dolls in action.

Many are praising Mattel for tackling such a controversial subject so well.

And some major voices have spoken out.

For kids who aren't totally secure in the gender they were assigned at birth, having these types of toys could be a great leap forward.

Although some made this joke.

But hey, lets all at least try to remember than gender actually isn't determined by what's in between your legs!

Although, as you'd probably expect ...

This new launch hasn't been without backlash. Many people are bizarrely outraged about the whole thing.

And many hold this belief.

@CNN Finally, Mattel makes a Barbie for the type of kid who doesn't give a crap about playing with Barbies. This C… https://t.co/h4iDF3ULzp
— Return to Reason (@Return to Reason)1569390992.0

The idea that a child may wish to explore both masculine and feminine aspects at the same time seems totally lost on some.

The idea that these dolls have both "male" and "female" clothing suggests some element of a binary - which these dolls are designed to question.

But these dolls aren't without support.

One particular mom commented that what she liked about these dolls isn't so much the neutral gender expression, but that there are less overtly sexualized than other Barbies.

There were some other complaints, too.

Although this range is probably Barbie's most inclusive, it's still far from perfect.

And some made this valuable point.

Sure, this doll is less intrinsically problematic than other Barbies - but many believe the move isn't out of social conscience, but out of capitalism.

Are you interested in the toy that's been making serious waves?

They're currently available right now, and can be found at your local Target or Walmart - or on Amazon, of course. Are you interested in what Barbie would look like aged sixty? Keep scrolling.