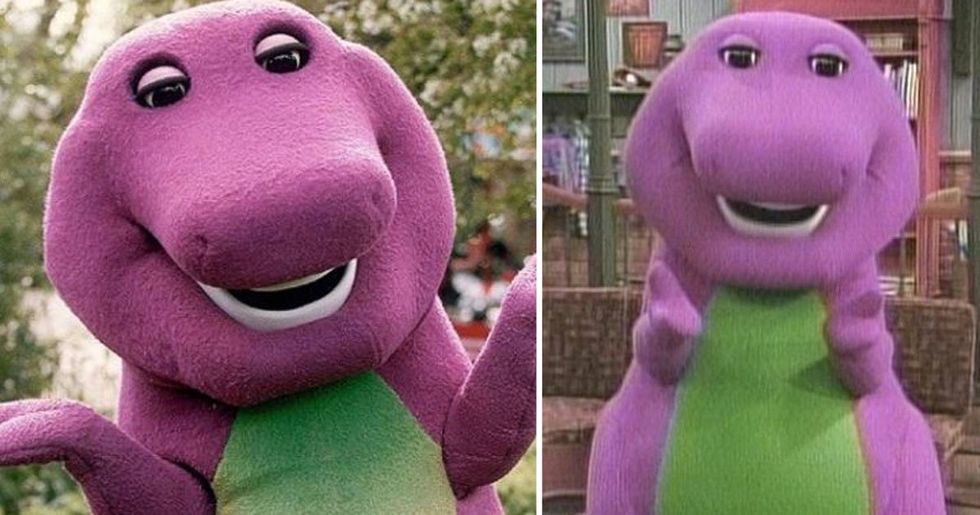 Barney the Dinosaur Has Been Unmasked and the Internet Is Shook

The realization that your mom and dad aren't happy all the time shouldn't be a surprise, and it isn't- the same way as finding out that some guy was inside the Barney costume isn't.

Deep down you always knew, right? In reality, though, these truths that we come across as adults-only serve to do one thing; wipe away that last bit of magic still clinging to our peripheral vision.

So who's ready to have their childhood ruined? I'm exaggerating of course, how can we ruin something that has already happened? If anything, unlike most revelations we have as adults, I can promise you now, this one's not a disappointment.

Barney and Friends first hit the airways in 1992.

The show was aimed at kids from the ages of one to eight years old, and looking back now who knew that a tv show about a purple dinosaur teaching kids educational stuff through games and songs would really be a hit? I guess there was something kind about Barney, something loving that we were drawn to.

No matter what your home life was like, Barney was always there. Plenty of us grew up with parents working a lot to put a roof over our heads meaning that we were left alone a lot. I think for many kids, sticking on the television set and hearing barney singing a song saved us from feeling alone.

Every single episode of Barney and Friends ended with the happy-go-lucky purple dinosaur singing the "I Love You" song to his friends and to everyone watching at home. The song taught an important message, that it is important to love and to be loved; to be grateful for those in our lives and to be grateful for each other, rain or shine. I think you can agree that this is an important message for everyone. It's particularly important for kids to hear that they're loved, which is why Barney was such an important show.

But the voice of Barney wasn't the guy in the suit.

The voice you hear singing all the joyful songs about friendship and love and how we should always see the best in each other was actually dubbed over by a voice actor and was not the voice of the guy in the suit. Which if you think about it, makes sense- given that there wasn't a mouth hole in the Barney costume, only a puppet style opening, and closing mechanism to give the illusion of a mouth.

A guy called Bob West was the voice of Barney for the longest period.

A couple of different voice actors have taken control of Barney the friendly purple dinosaur over the years but Bob West was the original and the longest-serving.

Bob West was there from the start.

Before Barney & Friends was picked up by Connecticut Public Television, the shows creator, Sheryl Leach made a series of video for home rental. This original low budget Barney show was called ' Barney and the Backyard Gang'.

Barney and The Backyard Gang.

The original home movie collection was produced from 1988 to 1991 by Lyons Group before getting picked up by Public Service Broadcast (PBS). The show was a massive hit in Connecticut but wasn't widely distributed to the rest of the country. If you happen to have one of these classic Barney videos gathering dust at home you might be happy to know they could fetch you a pretty penny on eBay.

The lady behind Barney...

Sheryl Leach, a former teacher from Dallas, Texas is the person that came up with Barney. Leach first dreamt up Barney when she noticed her young son grew to lose interest in the early-development kid's shows and felt as though there was a gap in the market. Apparently, Barney was originally going to be a teddy-bear but her son's love for dinosaurs swayed her to re-think Barney's form.

Leach continues to spread important messages in the US.

Along with her husband, Leach started a non-profit organization called 'The Shei'rah Foundation'. The company resolves to use the media to encourage a better understanding of different cultures. - A lesson I think we can all agree is much needed in this country right now.

What happened to Barney- the friend we could always count on?

All good things must come to an end I guess. Kids nowadays are more interested in those awful flashy videos on Youtube or one of the many cartoons available at their fingertips.

The top three children's shows in the US right now?

After Barney came off the air in 2005 what have the kids really been watching? What are the shows and the characters therein that our kids will wonder and subsequently discover the actors behind in the years to come?

Number one and thus the most popular children's television show in America right now is Spongebob Squarepants. This cartoon created by Marine educator, Stephen Hillenburg in 1999, about the adventures of the underwater town of 'Bikini Bottom', the fictitious home of the main character, Spongebob - who as his name suggests is in fact, a sponge that has somehow found it's way to the bottom of the ocean.

As of July 2019, SpongeBob and his pals were renewed for their thirteenth season. Since the show was first previewed on Nickelodeon in 1999, the franchise has made $13 billion in merchandise sales alone. Little did Hillenburg know, in the late '80s when his educational comic The Intertidal Zone which featured the original SpongeBob characters, was turned down again and again by publishing houses that the concept would go on to be so popular.

Second place falls into the lap of Rick and Morty, the cartoon about a nervous boy called Rick who is constantly led astray on wild adventures by his cynical mad scientist grandpa Morty. The show actually started off as a parody of Back to The Future before molding into its own unique universe.

Rick and Morty is part of a new dawn in cartoons.

The first season premiered in 2013 and its unstructured mumble style of writing is a much more modern taken on the story-telling format.

The newest entry to crack the top three lists is Steven Universe. This Cartoon Network animated series first premiered in 2013 and was created by the super-cool singer-songwriter, screen-writing, animating Rebecca Sugar- who previously worked on Adventure Time before making Stephen Universe. Kids are drawn to Steven Universe because of its colorful design, it's positive storylines and it's switched on humor.

Writers like Rebecca Sugar are changing cartoons for the better.

Stephen Universe teaches the importance of love, understanding, and family. If the ideals of Barney were made now in 2019, I think it would resemble something close to Stephen Universe. The show is positive, encouraging a positive attitude whilst encouraging a shared universal acceptance, promoting LGBTQ themes and teaching healthy interpersonal relationships. It does all this through the science-fantasy world of Steven Universe (named after Sugar's kid brother) and his magic crystal gems. Pretty neat huh?

Not forgetting where it all began...

Barney revolutionized children's television with it's positive, an educational show designed to promote inclusion, love, and acceptance between kids far and wide. According to Reverend Joseph Chambers, in his book "The Purple Messiah": "Too many children, Barney has become a guru of sorts. He teaches transcendental thought and mystical ideas."

Who was the guy in the suit?

And the answer to your question... The man who played Barney the longest was David Joyner. Joyner starred as Barney from 1991 until 2001 and remembers his time working on the show fondly in the clip below.

What's he been up to since Barney?

After his ten-year stint playing Barney, Rayner went on to work on other hit-tv shows, like That 70's Show and The Young and The Restless. Nowadays though, the 53-year-old can be found teaching reiki, performing spiritual healing and providing tantric massage. So if you fancy getting a massage off the real-life Barney, get yourself down to LA and book a session. He's not the only famous face to be unmasked recently, The Night King for Game of Thrones had people falling in love with him. Read on to see why...