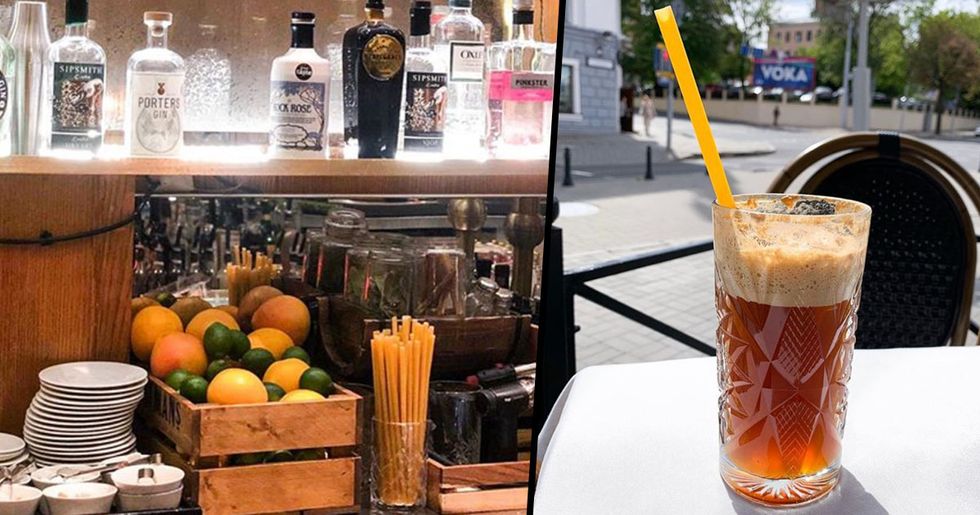 Since the world is turning more eco-friendly in the bid to reduce the effects of climate change, people are coming up with more innovative ways to make a change.

And the Italians seem to be one step ahead of us. Bars in Italy have decided to stop using plastic and paper straws. Instead, they've decided that the best way to combat this problem is to make use of a national delicacy. Pasta. I bet you're wondering: "How on earth does one use pasta to combat climate change?"

Keep scrolling to find out.

Climate change is the phrase at the tip of everyone's tongues.

Whether you believe in it, or you're delusional and you don't, we have to find ways to preserve the planet we're on.

Every day we're reminded that things aren't going to be so perfect forever...

...Not at the rate we're going anyway, so it is time to remove the rose-tinted glasses and address the destruction we've caused.

Some people have already started.

Simple things like recycling or swapping out your manufactured diets for more natural alternatives, every little change helps. And it's not just us regular folk that are trying to do our bit. A lot of businesses are chipping in too.

Straw alternatives are the place to start.

Giant francises such as McDonalds and Disney have banned the use of plastic straws and now have paper ones to accompany your drinks. Yeah, they might get a little soggy after a while, but who cares? You're saving the planet as you sip your milkshake (in a biodegradable cup, of course!)

Other restaurants have opted for other eco-friendly straws too...

The most popular being bamboo straws. Bamboo is 100% chemical-free while also being naturally anti-bacterial. It is also one of the most sustainable materials on the planet, so it's a win-win sitiation.

I mean, if you're looking for an eco-friendly way to drink your boba tea...

Then bamboo is the way forward.

However, recently a new trend has taken the world by storm...

And it is something we should have thought of a long time ago, but didn't. But, thankfully, the Italians have got our backs. They seem to be leading in the innovative ideas department.

Bars all across Italy have decided to switch out their plastic and paper staws for something else...

What comes to mind when you think of Italy? The Vatican? No... Pizza? You're getting warmer... Pasta? Bingo! The national delicacy has proved to be popular for more than just food purposes. Bucatini is a thin pasta that looks completely identical to a staw. It has a hole in the middle which means its perfect for sipping a mojito through.

Don't worry, there is a similar concept for our country too...

Stroodles is a staw company that makes its products out of wheat and water. Yes, all of it is vegan and 100% biodegradable, which means there are no downsides to it.

Hopefully, this effect will cause ripples through all industries.

We're all for making this a more sustainable planet. I mean, personally, if I ever have kids, I would want them to live on a planet where sharks, turtles, and other animals are an actual thing and not just a memory. So, get with it guys. Let's change the world. And if you want to help but you don't know where to start, then keep scrolling. Here are fifty, tiny ways that you can make an impact.