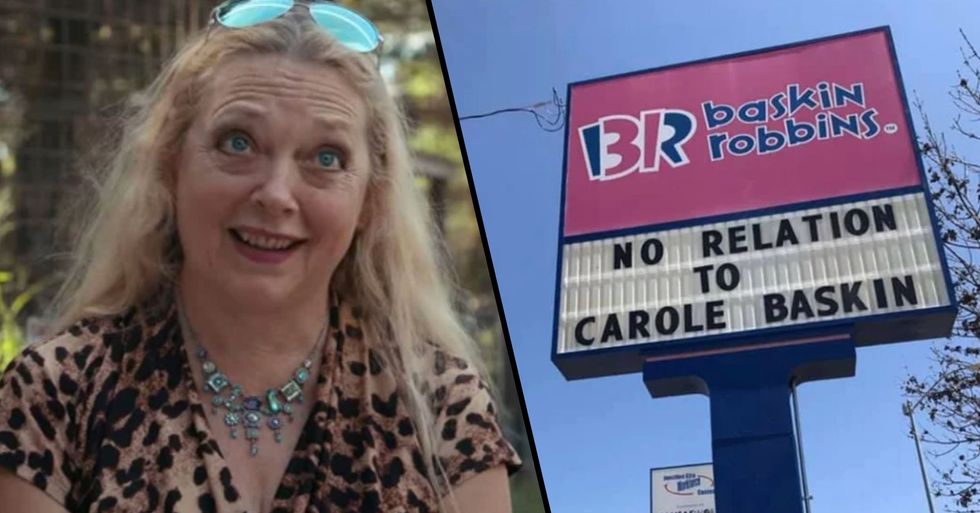 The ice-cream shop with a now, rather unfortunate name, has hilariously changed their sign to stress that they have no relation to the Tiger King star, Carole Baskin.

Keep scrolling for the full story, and to hear just how their quirky sign has benefited their business...

"Hey all you cool cats and kittens."

In the last month, most of you will have surely heard of this iconic saying, which came directly from the mouth of Carole Baskin.

Carole Baskin has become somewhat of a household name in the last month.

Baskin, who runs the rescue facility, Big Cat Rescue, has risen to unprecedented levels of fame after appearing in the now-viral Netflix docuseries, Tiger King.

Tiger King gives us a majestic insight into the captivity of big cats here in America.

The 7-part series retells the story of a war between Baskin and an eccentrically flamboyant tiger owner named Joe Exotic.

And Joe Exotic seemed to really have it in for Baskin, with footage showing him repeatedly wishing death upon her and describing how he would like to kill her.

It has been branded as "bonkers" by viewers, but that certainly doesn't mean it isn't binge-worthy.

After both Joe's marriage and business ventures began to fall apart...

He fell into a downward spiral and his obsession with Carole and her husband grew even bigger.

He allegedly hired a hitman to take Carole out whilst she was cycling down a deserted bike path...

The spotlight always lands on Carole in regards to the mystery of her missing husband.

The self-made millionaire had helped Carole transform their forty acres of Florida land into the animal sanctuary it is today...

And some of Don's relatives speculated that Carole was involved in his disappearance.

He was not granted the order.

5 years after Don went missing, Carole had him legally declared as dead.

And, to this day, nobody has been charged with anything to do with his disappearance.

Carole has repeatedly protested her innocence, and says that any claims made that she fed her husband to the big cats are "ludicrous."

Speaking to the New York Post, she said: "He’s [Joe] been trying, since 2009, to get his minions to kill me. He was constantly going on his internet show, saying that he has to get rid of me. It was very disturbing. The kinds of people who back up what he does are not stable people. It would be one thing if he went out to mainstream America. But he was going out to a group of wack-jobs."

But, despite her protests of innocence...

So, with all these awful rumors flying around...

You would be forgiven for not wanting any associations with the woman.

But one company had a rather obvious link to Carole...

By sharing the same name. Now that's just unfortunate, isn't it? Ice cream chain, Baskin-Robbins was obviously aware of their coincidental link to the big cat lover, so they decided to clear a few things up as not to lose any valuable customers.

That should do the trick.

"No relation to Carole Baskin." On Sunday, the Baskin-Robbins chain in Junction City, Kansas, updated its marquee to stress to their customers that they have no connection to the Tiger King star.

Carole may have killed her husband, but she's keeping alive ice cream stores during the lockdown.

Peggy Heldstab, the owner of the Junction City ice cream shop, told TMZ that it was her son's idea to put up the sign. And, on that very same day, the sign went viral on social media, doubling sales from the day before. For more Netflix content, keep scrolling to see what's coming this month...