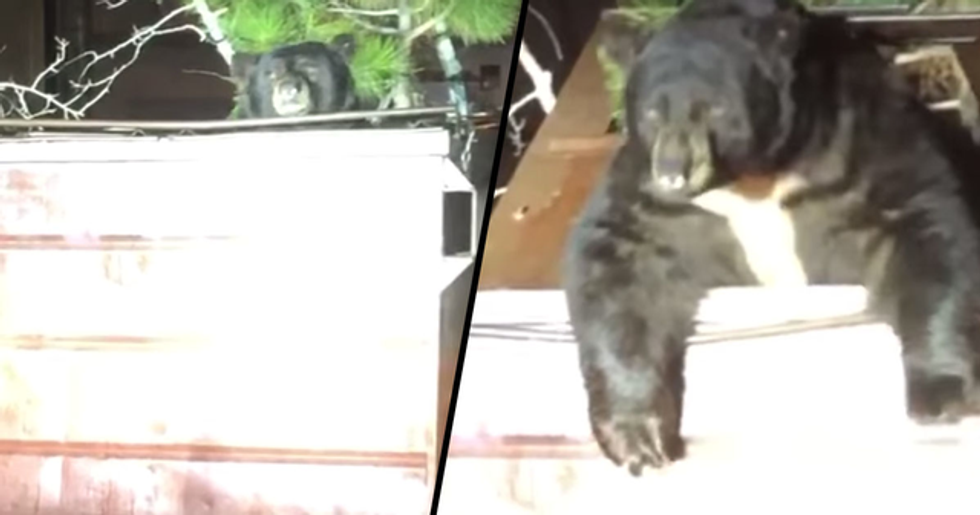 Bears are usually rather formidable looking creatures... Well, they are until they get themselves stuck in dumpsters, that is.

Officers from the Placer County Sherrif's Office were called to Kings Beach near the California - Nevada border at around 3 am on Monday after noise complaints from local residents. But, instead of arriving at an out-of-hand party, the police were confronted with the rather chubby bear, who had managed to wedge himself into a dumpster.

They were then embroiled into a dramatic and somewhat terrifying mission to rescue the bear and, miraculously, the full thing was captured perfectly on their car's dashcam camera.

Keep scrolling to watch the video, and to hear about the plump bear's fate following his ordeal...

The Placer County Sherrif's Office had one hell of a Monday.

Deputies, Dan Staley and Joe Bertoni, were out on patrol when, in the early hours of Monday morning, they responded to complaints of "loud noises" near an apartment complex.

However, upon their arrival...

They discovered that the reported noise pollution was actually being caused by a mischevious bear who had got itself into a little bit of a pickle while searching for food in a dumpster. What the neighbors could hear was the terrified animal wailing.

While bears are common to the area...

This particular bear was no stranger to run-ins with the law. "He is a local bear and has had prior run-ins with our deputies," Placer County Sheriff's Office posted on their Facebook page.

The bear even has his own nickname...

The police department has named the mischevious animal "Mr. T-Shirt" because of the distinctive white patch of fur on his chest.

So when the deputies arrived at the scene...

They recognized T-Shirt immediately. However, one of the responding officers, the Sheriff's Sergeant, Dave Hunt told the Los Angeles Times that "he’s not a friendly bear by any means."

So rescuing him was going to be a challenge.

In order to free T-Shirt from the dumpster, the brave officers would have to lift the lid with their own hands, mere inches from the confused, distressed, and possibly aggressive animal.

Luckily, they had their best men on the job.

Deputies Dan Staley and Joe Bertoni got straight to work, and their heroic rescue was caught on camera. The dumpster appeared empty at a first glance, but all was not as it seemed.

The dumpster moves, causing the officer to jump back in fright. And, out of nowhere, the curious face of a bear emerges.

It's difficult to not find the whole thing rather amusing...

T-Shirt looks adorable, although a little startled and confused, as it blinks like a rabbit caught in the headlights. As for how T-Shirt got into the dumpster in the first place, it is believed that he slid into a square opening on top of the trash bin’s main lid, which was locked.

But it is important to remember...

That these bears can be incredibly dangerous, and T-Shirt has a reputation. So the officers approached with caution.

In the video, one of the officers can be seen standing cautiously beside the dumpster...

As they determine that T-Shirt is well and truly stuck.

It seems that T Shirt had been taking part in a little dumpster diving...

And, while scavenging for left-over food, the chubby creature found itself in some difficulties when trying to climb out of the dumpster... The lid had somehow fallen, and T Shirt was well and truly stuck.

The officers attempted to open the lid...

But, because they couldn't safely get close to the dumpster, they resorted to using a long branch to try to push the lid open.

They fiddle with the lid for quite some time...

All while maintaining their distance from the visibly agitated animal.

Victory! The officers manage to get the chain that's holding the lid down free, and T-Shirt is able to stand tall once more.

However, their mission was not yet complete.

The actual lid was still partially trapping T-Shirt, so it was the officer's job to fully lift it to free the bear.

Carefully, and silently, one of the officers approached the dumpster...

And, while the unsuspecting bear's back was turned, he slowly lifted the lid with his own hands.

The lid is lifted...

And the bear immediately swings around, prompting the heroic officer to scramble away to safety.

The bear manages to haul itself out of the dumpster and it lands on the ground, with a slight look of relief of his face.

You can watch the full dramatic rescue mission here.

And, as for how T-Shirt got himself in such a predicament, the officers believe it's because he's simply fattening up for the winter. And the officers have even noticed how much weight T-Shirt has piled on. “They’re fattening up," Hunt said. “How he got in is beyond me. If he was a little bit skinnier, he could have gotten out. He’s a pretty big, good boy." Well, let's hope that this will teach T-Shirt not to scavenge for leftovers in the future...