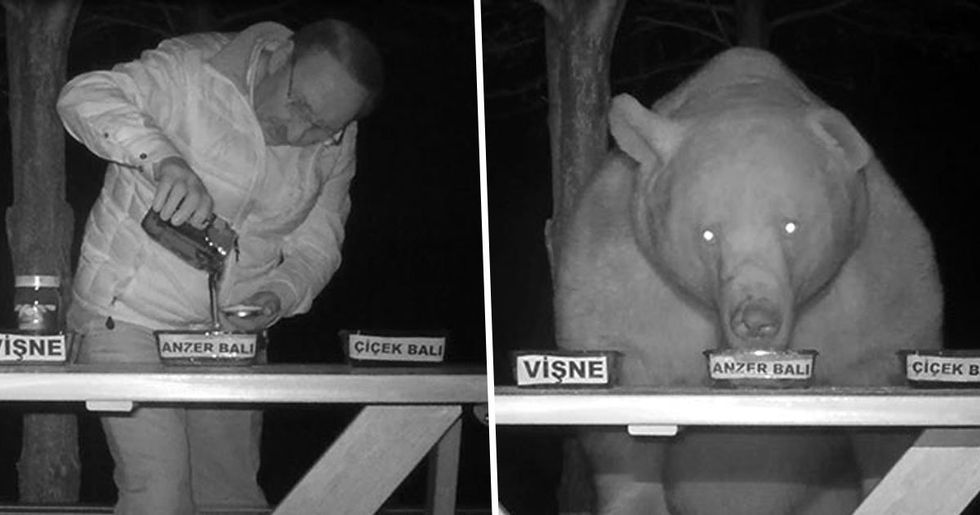 For those who have seen the childhood classic, Winnie The Pooh, it's no secret that bears just love honey.

It seems like these big carnivores will go to some pretty extreme lengths to get their honey fix - even if it means breaking into somebody's very own bee farm.

A Turkish beekeeper found that bears were the culprits when it came to his honey stock being mysteriously low, and he soon came to realize that he couldn't stop the bears from getting their sugary indulgence.

What he did to tackle the situation is complete genius so keep scrolling to learn more about this heartwarming story...

So it turns out that Winnie the Pooh isn't the only bear whose diet consists of nothing but honey...

Well, a bear's diet consists of more than just honey, but, according to wildlife biologists, bears are naturally attracted to beehives and they love honey.

And it's not just the honey that the bears are after - they like to eat the bees too.

Now that must hurt...

But it seems as though that bears simply aren't phased by munching on the sharp and pointy little insects, and it has been found that they will do whatever it takes to get their daily fix of honeycomb.

This means trouble for beekeepers...

Beekeepers go to extreme lengths to keep their beehives safe, including the installation of electric fences to keep greedy bears out.

Beekeepers are urged to build their hives in areas that lack wild bears.

But bears can sniff out a hive from miles away, so, sometimes, beekeepers find themselves fighting a losing battle against the hungry bears.

One beekeeper in Turkey was at his wit's end...

Ibrahim Sedef, who lives in Trabzon, Turkey, is an agricultural engineer who specializes in beekeeping.

Ibrahim prides himself on his different varieties of honey...

And who better to taste the samples than the ravenous bears?

Ibrahim had been struggling for some time with the local wild bears breaking into his beehives and eating up all of the honeycomb and honey. They would trash the hives and become close to completely destroying them in a desperate bid to get their honey.

There's no denying how cute the bear cubs are, but Ibrahim couldn't allow them to keep destroying his hard work.

Ibrahim placed metal cages around the hives, but the bears managed to break through anyway. He would also try to distract the bears with other foods such as bread and fruit, and whilst the bears appreciated these additional snacks, they would still break into the hives.

So, when he couldn't control the bears breaking in, he tried to use them to his advantage...

Ibrahim was also interested in the bears' movements and behaviors, so he decided to use his honey samples to learn more about the creatures and also get some taste tests on the go.

These cameras allowed Ibrahim to track the bears who would freely roam his farm and help themselves to whatever they pleased.

But he did more than observe their behavior...

Ibrahim decided to set up a "tasting table," which would contain 5 pots of different types of honey that he created on his farm.

The tasting table proved to be very successful...

As his footage shows, the bears absolutely loved the tasting samples and ate every single one up.

So where does the "professional tasting" come into this bizarre situation?

Ibrahim began to observe which honey samples the bears would be initially more drawn to, and which ones they would prioritize over others.

And an authentic way of seeing which honey tastes the best!

The bears clearly had a favorite...

Speaking to DHA, Ibrahim said that the bears were drawn to the smell of Anzer honey as they always tasted it first, sometimes without even touching the cherry blossom honey.

Anzer honey is a Turkish delicacy...

2 pounds of this famous honey sells for the equivalent of $300, so it's safe to say that these bears have expensive taste.

It's a win-win situation...

Ibrahim now has pristine and in-tact beehives along with some qualified tasters for his honey. The bears, on the other hand, simply have unlimited access to their favorite sugary treats without having to destroy a complete beehive farm!

A heartwarming story of how humans and animals can work well together without inflicting harm upon one another... and, it has to be said, these honey bears are simply adorable! Speaking of protecting bees, did you hear that Morgan Freeman has converted a 124-acre ranch into a sanctuary to save bees? Keep reading for more on that!