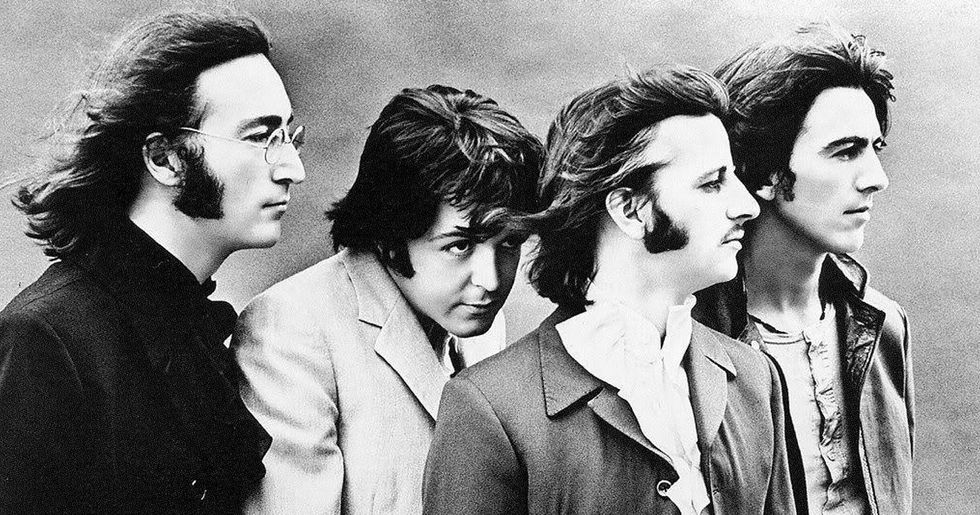 One of the most popular and beautiful songs of all time, The Beatles' "Hey Jude" has had us tearing up and shouting "Na na na naaa" since it was released back in 1968. From its simple, empathetic opening notes that find Paul McCartney hoping a person named Jude doesn't "make it bad" to its rousing ending that lasts for so long but stays powerful throughout, the entire song is a masterwork.

But if you've ever created art, you know there's always more going on behind-the-scenes than what makes it into the finished piece. And that's what we're exploring today with "Hey Jude" — the melody and lyrics of this song came to Paul McCartney in a deeply heartbreaking — yet touching — moment.

In fact, "Hey Jude" was written in the midst of tremendous chaos for The Beatles, and when you hear the story of how it came about, it'll change the way you listen to the song forever...

You know who The Beatles are.

They're just about the most famous band of all time. The Fab Four — John Lennon, Paul McCartney, George Harrison, and Ringo Starr — put out truly incredible pop songs throughout the '60s before becoming tremendous artists with their later works throughout the '70s.

Most of that genius stemmed from the collaboration between John and Paul.

While John believed in making music about real world pain, Paul was about tapping into our latent feelings and building connections. (Ringo? Ringo was just down to clown.) But it was John and Paul working together so closely — and trying to top each other — that made The Beatles what they were.

Almost purely a Paul joint, "Hey Jude" was a song that John couldn't help but admire. He called it "one of Paul's masterpieces" and said, "'Hey Jude' is a damn good set of lyrics and I made no contribution to that!"

It starts out so quiet...

Opening with nothing but piano and Paul's voice, "Hey Jude" really does feel like the beginning of an intimate conversation between a man and his unlucky-in-love friend Jude.

Like a snowball rolling down a hill, "Hey Jude" just gets bigger and bigger. Adding first a tambourine, then simple drums, and then backing vocals.

These layered musical additions again make the song feel like a conversation.

Think of the most important conversations you've ever had — life advice from your grandfather, or the moment you realized you were in love. When you sat down, no one announced, "This conversation is going to change everything." It built slowly, with little moments that almost shock you into the realization that you'd remember this conversation forever.

And it has maybe as powerful of an ending as any song in history.

Once Paul sings the word "better" six or seven times, we launch into a nearly three and a half minute-long chorus that at no point gets dull. It feels like hundreds of voices are singing those na na na nahs.

(Paul does kind of flip out during that part though.)

The song builds so effectively that it feels earned, but imagine Paul actually at a microphone recording that bit where he goes "hey Jude, Jude-y Jude, Jude-y Jude-y WAH hah!" I'm not a producer, and far be it for me to give Paul McCartney notes on songwriting, but if I were in that studio I might've told him to chill a bit.

This was the period when The Beatles were feuding over the direction of the band, but it was also in the midst of John Lennon leaving his first wife, Cynthia Lennon, for Yoko Ono.

It's so easy to think of Cynthia Lennon as just "John's first wife."

We don't necessarily think of who Cynthia was as a person — she was just John's first wife. Her existence was defined by her relationship to John. that's probably because the cultural narrative of John's life centers on The Beatles. It really only includes Yoko because of the supposed disharmony she injected into the group.

But Cynthia and John had been together since college.

In the early days of their relationship, John's band took off and became the biggest pop act in the world. Part of the group's mystique was making every girl in the world think they had a shot. That meant Cynthia had to stay more or less in seclusion.

And they had a son together: Julian.

Born in 1963, Julian Lennon would fall through the cracks with his father. John was in the biggest band in the world, and seemingly didn't want to settle down into a family life. This lead to a lifetime of paternal neglect for Julian.

But Julian was close with Paul McCartney.

John seemed to be aware that his Beatles bandmate was, in some ways, filling a hole he wasn't.

But Cynthia was friends with all of The Beatles too, including Paul.

To the extent that we think about Cynthia Lennon at all, it feels like she's part of John's life and Johns life only. But The Beatles had been friends for years, so Paul would know and care about Cynthia as well.

In the midst of the divorce, Paul decided to go over to Cynthia's house.

Knowing the divorce was difficult for Cynthia, but also knowing he'd be continuing his relationship with John, Paul was in an uncomfortable place. And yet, once it became clear that John would be leaving Cynthia for Yoko, Paul pulled off a true good guy move and went over to see Cynthia and Julian.

He had to see it as a sort of goodbye.

While he obviously cared about Cynthia and Julian, the practicalities of touring and collaborating with John meant Paul would more or less be leaving their lives along with him.

On the way over to their house, Paul tried to think of something comforting to say to Julian.

What do you say to a five-year-old whose parents were getting divorced, knowing that you wouldn't be involved in his life anymore?

So Paul did what Paul does best, and wrote a song.

Here were the lyrics he came up with: "Hey Jules, don't make it bad, take a sad song and make it better."

That's what "Hey Jude" is about.

The song is not trying to convince a guy to go after the girl he fancies — it's a note of encouragement to a little boy going through an event that could shut him down to love.

The song would go through many changes.

The big one being, of course, the shift from "Jules" to "Jude," which Paul thought was easier to sing. (Try to sing "Hey Jules" right now. He was right. It's slippery.)

But John fought for one line to stay the same.

Initially a placeholder line, the lyric "The movement you need is on your shoulder," was apparently John's major contribution. He demanded Paul keep it in the song, because even though Paul didn't know what it meant, John did. He saw the beauty in knowing that the action this figure needed to take was well within his reach, as close as his own shoulder.

John, perhaps solipsisticly, thought "Hey Jude" was about himself.

In a Rolling Stone article, John said, "I always heard it as a song to me. Yoko's just come into the picture. [Paul's] saying, 'Hey, Jude — hey, John.' Subconsciously he was saying, 'Go ahead, leave me.'"

Julian would grow up.

Despite the fact that John was there for his son Seann, Julian basically grew up without his father in his life. In the mid-70s, John dated a woman named May Pang during a brief separation from Yoko Ono, and she pushed him to get back in contact with his son.

But Paul kept in touch.

A Rolling Stone article from 1984 about Julian's first record release saw him open up on his relationship with Paul: "[McCartney] always sends me telegrams on my birthday, which is nice, and he sent me one about the record a couple of days ago: ‘Good luck, old fruit.'"

Think about how that changes the context of the song.

The "sad song" isn't about being lonely because you can't get a date. It's about the disillusion of the one relationship that will define what it means to love for the rest of your life.

Paul is asking Jules not to shut down.

The hopefulness on display in "Hey Jude" comes from Paul asking this boy he cares not to harden emotionally; to let this pain make him afraid of love for the rest of his life.

And the song's long fade out that seems to never end?

Even that plays an important role in the song's recreation of the conversation Paul had, all those years ago, when he went to see Cynthia and Julian, and asked this little boy to take his sad song and make it better.

Again, think back to those important conversations in your life.

"Hey Jude" shows us what it means to care about someone even when you're not around.

That final chorus, the never-ending "na na na nahs", speaks to the influence a single conversation, a moment of caring and affection in the midst of turmoil, can carry us through the rest of our lives.