The Most Beautiful (And Most Hideous) College Campuses in the U.S. | 22 Words 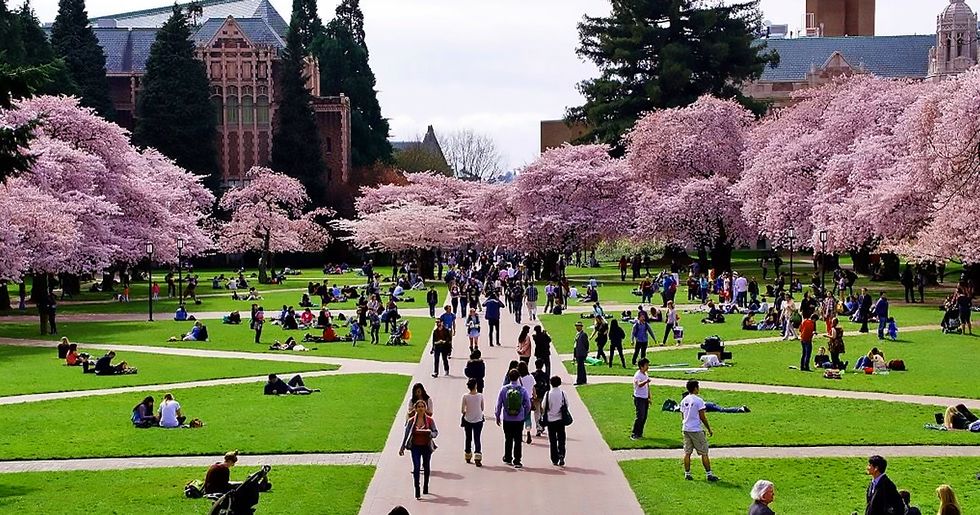 The Most Beautiful (And Most Hideous) College Campuses in the U.S.

Choosing your college is a huge task, one that many students face every year. There are lots of criteria that students use when picking: academic programs, professors, location, monetary cost and financial aid, and so on. But there's also the question of beauty. Namely, what are the prettiest (and ugliest) college campuses?

It might not seem like a big deal, but a polished and pristine campus can have a big effect on students! Similarly, you might find yourself wishing for something different if you end up on one of the country's worst campuses. Sure, some people don't really care about their surroundings, but the fact is that some colleges out there really distinguish themselves. And yes, we mean that in both the good way and the bad way.

So check out the prettiest and ugliest of all the college campuses!

It's not surprising that the campus of Smith College is considered among the most beautiful when you learn that it was originally designed to be a botanical garden in the late 1800s! Now, the college grounds are home to over 1,200 kinds of shrubs and trees, and a popular (gorgeous) spot called Paradise Pond.

Ugly: the University of California Irvine in Irvine, CA.

Let's start with this banal, uninviting example of a college campus. UC Irvine's buildings are, for the most part, boxy structures made of light brick and concrete--as you can imagine, the overall effect is not a particularly inspiring one. At least Irvine itself is a beautiful area!

Santa Barbara itself is a beautiful town, right on the Pacific coast north of Los Angeles. UC Santa Barbara takes full advantage of its ideal placement: the campus includes a lagoon, a beach exclusively for students (seriously, what?!), hiking trails, and more.

Ugly: the University of Tennessee in Knoxville, TN.

Remember how UC Irvine was boxy with the light brick build? Well, the University of Tennessee in Knoxville takes that layout about ten steps in the wrong direction, its gigantic library a mess of lego-like orange brick structures mashed into one ugly building. Yikes.

Evanston, IL is one of the nicer suburbs surrounding Chicago, and Northwestern University is situated right on the banks of Lake Michigan (which, by the way, almost looks like a small ocean due to its immense size). Aside from a picturesque lakeside scene, Northwestern's architecture is nothing to scoff at: its main hall is built in the Victorian Gothic style, and its grounds contain their own sculpture garden.

First up, Towson's setting has to be addressed: it's straight-up not in a very safe area of town. It also has the appearance of a strong, tall, brick and glass fortress, which doesn't exactly scream "welcome" to those who visit.

Unsurprisingly, most of the country's ivy league schools make this list; they're all insanely well-curated. Cornell's campus takes up a whopping 4,800 acres, with valleys, gorges, trees abound, and other natural decors. Among the school's buildings, its impressive auditorium, Bailey Hall, is built in the Greek-Revival style.

Do you know those areas that just...don't have much of anything? Well, SUNY Binghamton's locale is one of them, and the campus itself is so utilitarian you'll honestly think you're back in high school the minute you take in its somber, unappealing vibe.

Sure enough, here's another ivy league beauty: Yale's array of buildings could definitely drop a few jaws, well-decorated Gothic-Revival style spread out over a suitably large campus. Visitors should make sure to check out the university's library, which is decked out with stained glass and stone gargoyles.

Ugly: the University of North Texas in Denton, TX.

Some of the colleges on this list have stunning amphitheaters, grand auditoriums and other gathering spaces to die for. And this university definitely isn't one of them. Its sports arena is technically called the Coliseum, but people mostly just call it the "Super Pit," and that building alone is a major eyesore.

However large the campus grounds are with any of the other colleges on this list, none beat Berry College. This school's campus spans over 27,000 acres, including not only elegant English-Gothic style buildings but also plenty of forests, streams, and just a generally gorgeous landscape.

Beautiful: the University of Hawai'i at Mänoa in Honolulu, HI.

How could a school in Hawai'i not make this list? It's impossible not to hear about how naturally beautiful the Hawaiian islands are, and the University of Hawai'i at Mänoa is set up in a valley flush with palm trees, right inside one of Honolulu's wealthier residential areas.

Ugly: the University of Massachusetts Amherst in Amherst, MA.

The University of Massachusetts Amherst is basically an architecture critic's dream: none of the school's buildings look like they belong together, and the overall effect is one of disjointed confusion.

Sadly, not just anyone can experience the beauty of Mount Holyoke College; the women's liberal arts school is another one of those campuses surrounded by lush forests, hiking trails, and with its own botanical garden thrown into the deal too.

If some of these campuses are high-school remodels, then CUNY Hunter is a downright fallout shelter with windows and supplemental levels, cold and not very welcoming in appearance--not the least because it just doesn't have enough windows! Sure, it's in NYC, a hub of culture both nationally and worldwide, but CUNY Hunter's look doesn't contribute much.

Vassar College's campus is actually an official arboretum, with ecological preserves and hundreds of different tree types growing on the college grounds. The school also has over 100 buildings and uses that surplus to create a campus with a strong variety of architectural styles.

Ever seen a winter in upstate New York? Well, as someone who has, let me just say: it's gross. And due to its unfortunate campus appearance, Clarkson University doesn't really add anything special to a bleak NY day. It's all just...bleak.

Scripps College isn't anywhere near the Mediterranean, but attendees will definitely feel like they're right there on its shores. The college's Spanish-Revival style buildings are surrounded by orange trees, rose gardens, and a Mediterranean-style wall fountain.

Even the University of South Alabama itself acknowledges its architectural flaws. The school has been putting in much nicer new buildings in recent years, so it's really just the old ones that stand out as ugly. The university's website actually goes so far as to call one of its old buildings "basically windowless!"

Do you live for the ocean (and the beach)? Pepperdine University's location in Malibu gives its students prime access to the local beaches, and the university itself has such a charming Mediterranean style that the Princeton Review named it the most attractive college campus in the U.S. in both 2006 and 2007.

Just as some of the colleges have made it onto the Princeton Review's lists of beautiful campuses, North Carolina State has made the publication's list of "least beautiful" schools. These days, the main gripe about the campus is its mismatching buildings, with renovated buildings not at all cohesive with its old red-and-white brick ones.

If it seems like there are a lot of California-based colleges on the "beautiful" side of this list...well, that's because there are. Hey, Cali is a big state with a lot of natural beauty in places, so what can we say? Stanford University has a pretty huge campus, with trees and gardens surrounding some truly impressive architecture, including the university's "crown jewel," the Stanford Memorial Church.

Ugly: the Illinois Institute of Technology in Chicago, IL.

The Illinois Institute of Technology's big campus issue is pretty obvious to anyone who visits: it shares the campus space with an office park. So some buildings on campus are quite impressive, and then some are boring old office buildings that detract from the overall effect.

Dartmouth's many outside attractions--including the Dartmouth Green and plenty of well-maintained rural land--are beautiful to be sure, but Dartmouth didn't always have such a pretty campus! The college actually underwent a revival in the early 1900s, which paved the way for the campus we see today.

SUNY Stony Brook is special among "ugly" campuses because it has been actively criticized as having a "prison" aesthetic--so that should tell you a lot about the vibes you'll get when you step onto the campus!

Wellesley College isn't just built in a charming rural forested area; it was actually designed to become one with the landscape, built to suit the existing scenery rather than bulldozing the scenery to make room for the college. It's also got a body of water: the college is right near the shores of Lake Waban.

Claremont, California is a beautiful place, but Harvey Mudd's campus isn't doing the locale any favors. Its flat stone buildings are ugly enough, but they also have these weird bumps that have earned the nickname "warts." So, if you're looking for a college that apparently sprouts its own warts, Harvey Mudd is the one.

Here's another university that won the coveted number one spot on a Princeton Review ranking. Colgate University was the nation's most beautiful campus in 2010, and while other schools have since claimed that spot, Colgate remains a grand campus with Romanesque buildings and the lovely Taylor Lake on its grounds.

RIT is called "brick city," and for a good reason: its boxy buildings are all entirely built from ground to roof with reddish-brown brick. At least RIT seems to be aware of its reputation since it has begun beautifying the campus in recent years.

We're getting close to the creme de la creme of college campuses now, and Bryn Mawr's striking architecture and verdant foliage have been used as a template for many other college campuses in the years since Bryn Mawr's construction. Students who need a moment of peace can even go and feed the inhabitants of the campus's duck pond!

Brandeis University's campus may be the most mismatched of all: it includes genuinely impressive-looking Modernist buildings designed by the famous architect Eero Saarinen, which you'd think would disqualify Brandeis from the "ugly campus" list. But when you combine Modernist buildings with dreary brick box-buildings and one building that looks like an actual castle, the result is just confusing.

Beautiful: the University of Notre Dame in Notre Dame, IN.

It's not hard to find the main building in the University of Notre Dame's sizeable campus; a great golden dome is situated right on top of it, one of the school's most memorable features. However, all of Notre Dame's architecture stands out from the crowd, including the great Neo-Gothic Basilica of the Sacred Heart.

The fact that SUNY Purchase actually inspired the creation of a parody Tumblr account called "Beautiful Purchase" should be pretty telling. It's one of SUNY's best art schools, but the school itself isn't very artfully designed; most of its buildings are so plain and boxy that Purchase has actually been described once as "a repurposed maximum security prison." Message received.

Beautiful: the University of Virginia in Charlottesville, VA.

And lastly, we have the University of Virginia in Charlottesville, otherwise known as "the proudest achievement of American architecture in the past 200 years" according to the American Institute of Architects. The school's striking campus even includes a Palladian-style Rotunda inspired by the great Pantheon of Rome, making it easily one of the top campuses in the U.S. Which are your favorite (or least favorite) college campuses? Share with your friends and see what they think!