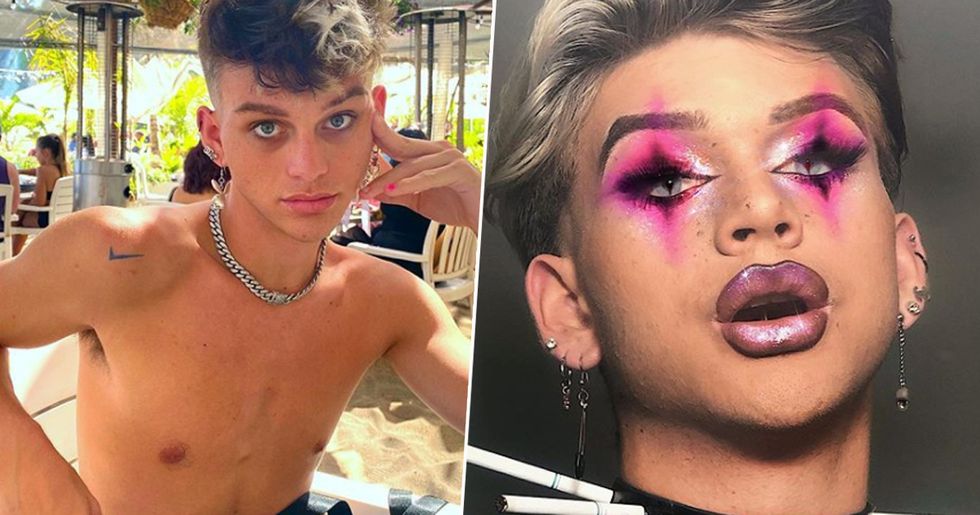 Beloved beauty influencer, Ethan Is Supreme, has passed away at the tender age of just 17.

Ethan Is Supreme has tragically passed away.

The beauty influencer was just 17 at the time of his untimely death.

He passed away over the weekend.

Real name, Ethan Peters, died at some point in the past day, according to his close friend and musician Ava Louise.

Many beauty influencers paid tribute to the youngster.

Ethan's death drew a strong reaction in the beauty and YouTube community. People such as Tana Mongeau, Manny MUA and Grace Auten, among others, posted tributes to their late friend who was just getting his feet wet in the biz.

But his career was only just getting started and his fanbase was rapidly growing on a steady basis.

Ethan struggled with addiction for years.

And his friend Ava claims she wished she could have done more to help curb his addiction.

She described his drug taking as 'pill popping'.

She claimed his addiction as being fueled by fame at a young age. She added that he cried out for help but that tragically it didn't prevent his death.

My best friend in the entire world, my twin flame.....the only person there for me when I had no one. I love you Ethan, I am at a loss for words. I wish I knew how bad it was. I know what you’d want me to say to the Internet rn but I’m to heartbroken to say it. Rip.

"Addiction is a disease."

I had to pull Ethan aside in recent weeks and have talks with him about his usage. Everyone close to him was scared. I just wish I fucking tried harder I fucking wish I yelled at him more I wish I didn’t enable a single pill he popped.

"Snap your friends before it's too late."

Get your friends REAL help before it’s to late. Ethan told me a week ago he wanted help...I wish I forced him I wish I yelled at him. I fucking wish I didn’t let him do pills in front of me. This pain is insane.

Ava also took the opportunity to lend a helping hand to anyone else struggling with addiction.

She shared numerous hotlines and said that addiction shouldn't be shamed but should rather be discussed.

Ethan had an addiction and addiction should not be shamed. I’m openly discussing his cause of death to save the next kid from a perc. He was so bright and so smart. He needed to live. He was more than his demons and you all are to. Please get help. Call 1-800-662-4357.

Rest in peace ethan @trashqueenethan you were so incredibly talented at such a young age. i know he’s made many many mistakes... but to say he deserved to pass away is horrible and inhuman. i pray for his family and loved ones, a horrible loss 💔

Many fans have paid tribute to Ethan online.

So, according to Cole Carrigan, Ethan is Supreme has passed away. This is heartbreaking. He was very young. This year bites

ANY of y’all celebrating a child’s death...have being a sociopath. ethan is supreme passing is tragic regardless of what he did. a child overdosing is the worst it can get

Many others are bringing up Ethan's past.

From when Ethan was allegedly racist on numerous occasions.

However most are claiming that at the end of the day.

No matter what anybody has said, the death of a young teenager is always a tragedy.

One person made the same point.

why do y’all post about september being suicide awareness month and then ur next post is laughing that Ethan is supreme died of a drug overdose. no matter ur opinion on him that’s horrible

I rlly didn’t like that ethanissupreme kid but y’all are so fucked up for celebrating his death
— JAMES (@JAMES)1599399308.0

Another took to Twitter to claim that now is not the time to bring up Ethan's past. They wrote:

Idc if ethanissupreme was a horrible person, but he’s dead. I seriously don’t think y’all understand the gravity of someone being DEAD. The fact that y’all want to bring up his problematic behavior when he passed mere hours ago is horrific. People are mourning. Now’s not the time

His family are friends are mourning.

So I get that Ethan Supreme was a little pain in the ass kid, but its obvious he had problems. The fact that a lot of yall are sitting here GLAD that a CHILD is dead is making me physically ill. Its recovery awareness month.. get yourself educated bc you could be next. RIP ethan

It doesn't hurt to keep quiet while his family and friends are mourning the loss of such a young kid.

Our thoughts go out to Ethan's family and friends during this hard time.