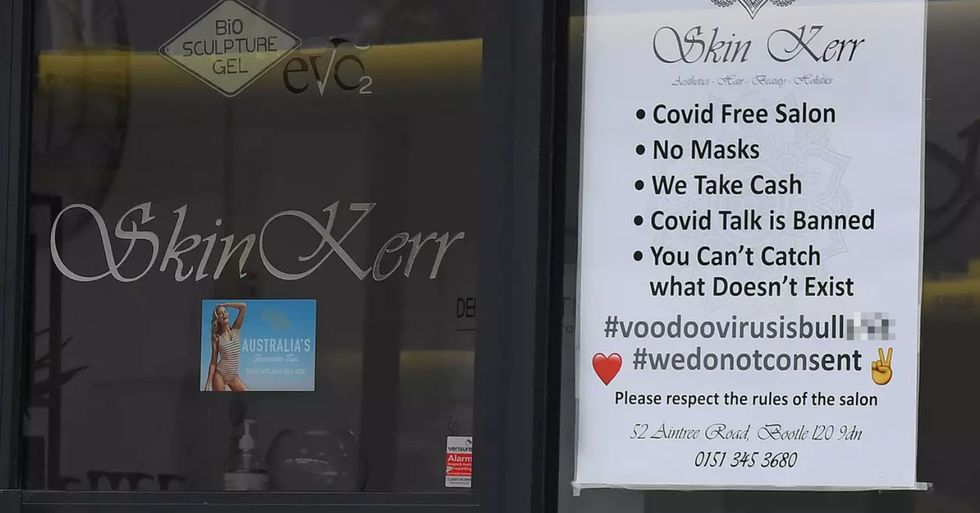 A woman has been criticized for her approach to coronavirus after putting a pretty crazy list of bullet points in her salon window.

People think it's time she started taking this pandemic seriously...

Beauty parlors all across the world were forced to close at the beginning of the year.

But since reopening one beauty parlor has taken an extreme approach to new salon rules.

Global coronavirus death toll 'could triple by Christmas' as cases surge around the world https://t.co/sBnNqa9mGW
— i newspaper (@i newspaper)1599375600.0

As it stands, there are over twenty-seven million cases of the virus worldwide and the number of deaths is staggering. We can't even begin to imagine what the families of those lost to this horrendous virus must be currently going through.

In some areas, they have been reopening hair salons and beauty parlors.

But one manager in Liverpool, UK has faced backlash after reopening, for her response to the previous closure.

She put a sign in her window stating "the virus doesn't exist."

She has even banned all talk of Covid-19, as well as face masks, as she believes the virus doesn't exist.

She put the sign up in the window of Skin Kerr Aesthetics, Hair and Beauty.

She has since received threats due to her behavior and apparent disregard for her customers' safety.

According to the Liverpool Echo, she won't allow people in if they're wearing a mask.

But as cases continue to rise, people have blasted her insensitive and dangerous business approach.

And 1,117 have lost their lives in hospitals close to the salon.

The manager said she "did not wish to discuss" the poster.

As threats of violence have already been made against her.

The poster contained a series of crazy bullet points...

Stating that it was a "COVID Free Salon..."

"No masks, we take cash; COVID talk is banned; you can't catch what doesn't exist."

The bullet points end with "#voodoovirusisbullsh**" and "#wedonotconsent" and states "please respect the rules of the salon."

Hairdressers in the UK are required to wear surgical face masks as well as clear visors as a precaution and to keep customers safe.

Hair salons and barbershops in the UK re-opened again in July...

After being ordered to close in late March.

After sharing her outrageous thoughts on social media, people have roasted the owner.

One, who tagged Merseyside Police in his comment on Twitter wrote: "Can we do something about this irresponsible business owner - @skinkerr clinic please? Merseyside already hovering just below levels to have restrictions reimposed."

After seeing the sign, they wrote: "Getting your hair or nails done in Liverpool? Here’s one to AVOID. Nice one guys! Doing a great job at flushing your biz down the toilet!"

And it seems to have disrupted business for the owner...