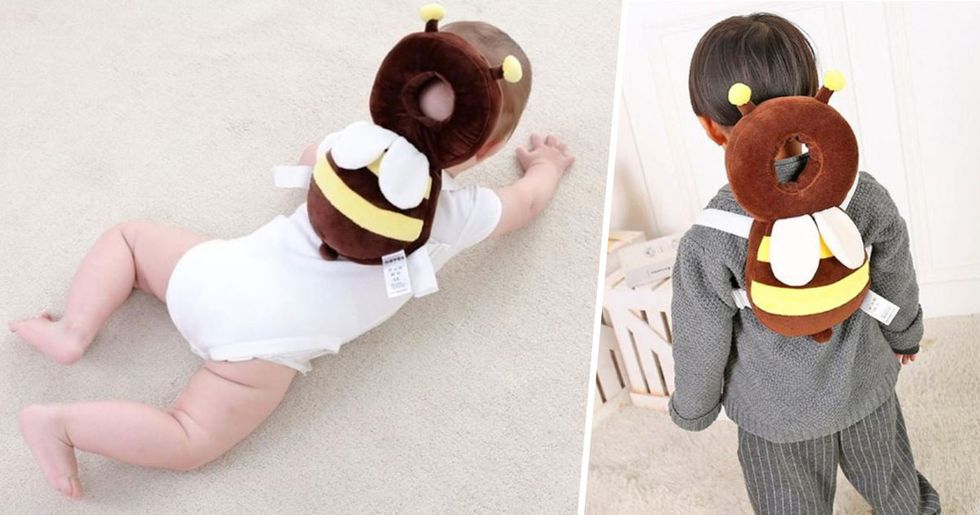 Bee-Shaped Backpacks Protect Babies' Heads if They Fall Over

When your kid starts toddling around, it can be one of the most anxiety-inducing times. They seem to have their hands in everything, have the ability to somehow crawl around quicker than you can catch them, and, of course, have zero sense of direction - meaning us parents are left worried that our precious bundle of joys will take a tumble and hurt themselves all the time.

Of course, the odd tumble here and there is completely normal, but we still want to do everything in our power to prevent seeing our little ones in pain.

Well, it seems like this genius backpack has the answer to all of our prayers, as the invention protects babies' heads if they happen to fall over.

The backpacks are animal-themed, with one of the most popular choices being bee-shaped - so not only are they a literal lifesaver, but they are pretty damn adorable too.

Keep scrolling to see some of the cutest pictures you'll see today.

There's nothing more amazing than watching your baby grow.

But as they go from a tiny newborn to a crawling little toddler, as parents, we tend to worry even more.

Because, let's be honest, when they start crawling, all they want to do is explore.

... which can have stressful consequences for parents. From tumbles to minor bumps and bruises, when they're crawling, these things become more and more frequent - after all, they're discovering a new world, but, as parents, we want to do everything that we can to prevent them from getting hurt.

But this clever invention solves all of those worries.

These cute backpacks protect your baby's head if they happen to fall backwards, which, for parents, is basically one of the biggest saving graces you could give.

The bee design appears to be proving the most popular.

Though the backpacks come in a range of animal designs, parents seem to opt for the bee over others. We have to admit, it is the sweetest thing we've seen.

Take a look at the genius invention in action...

The backpacks strap over the shoulders just like an ordinary bag - but the head protector offers a sort cushioning for babies if they fall.

Isn't it the cutest thing you've ever seen?

The backpacks are designed for tots aged 4 to twenty-four months, an age where the head is a particularly sensitive area while growing.

And they now come in a vast array of designs ranging from monkeys and giraffes to ladybirds and pandas - so you're sure to find the perfect one for your tot.

They're really affordable too.

We love nothing more than a bargain, and parents can get their hands on the backpacks from various sellers on Amazon for less than $5, which is a very reasonable price. Although other websites are selling them for a heftier price tag of $18, depending on which design you want. Basically, it's a case of shopping around for this one.

And the invention is exploding in popularity, with parents taking to Instagram to showcase their babies wearing the fluffy backpacks.

Like this snap, which is the most heartwarming thing ever. We need one of these backpacks right now.

And they aren't just for babies.

Toddlers can also benefit from the backpacks - after all, we all know that, even though they can walk, they aren't exactly the most agile of humans. So while it's safe to say that these backpacks will be making parenting that little bit easier, as parents, there are numerous other problems we all face. And, of course, there are inventions that can solve them. We've listed thirty-seven handy inventions that solve parenting problems that we all have. Keep scrolling to have your life made that little bit easier...