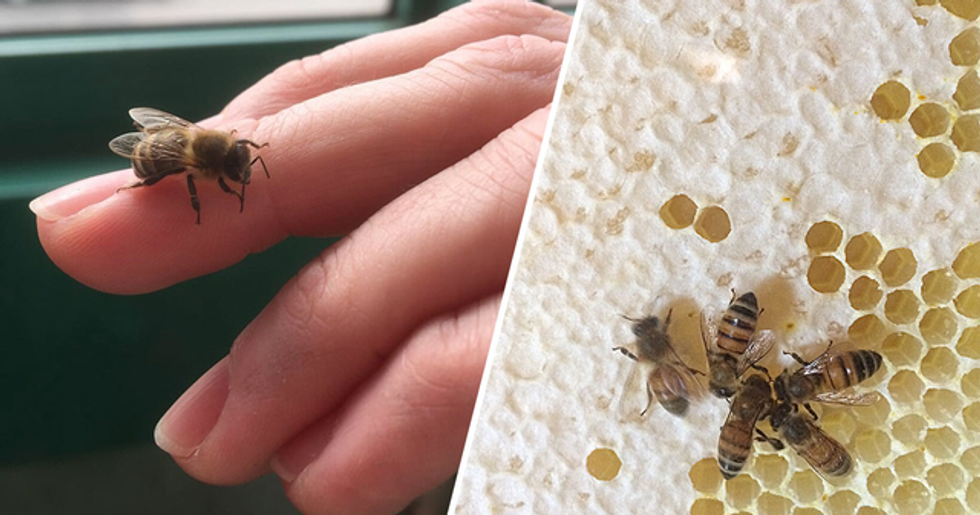 Bees Have Been Declared the Most Important Living Thing on Earth

You may think they're annoying at picnics, but it's time to get on board with the bees as Science Times has confirmed they're the most important creatures on Earth. A study by the Earthwatch Institute for the Royal Geographical Society of London found a staggering seventy percent of the world's agriculture depends on the insects, meaning without them, much of the wildlife in the world would begin to disappear. They're also the only living creature that doesn't carry pathogens.

In spite of this study, the numbers of bees on Earth are dramatically dropping, with an over ninety percent decline in the past few years.

For all the bee info you've ever wanted - plus the steps we need to save these important creatures - keep scrolling.

Unless you've been living under a rock for the last year, you may have caught on to the fact that the fuzzy little insects are more important than we've been believing.

It turns out that bees are key to a healthy environment.

Bees are perfectly adapted to pollinate, helping plants grow, breed and produce food - They do so by transferring pollen between flowering plants and, as a result, keep the cycle of life turning.

The vast majority of the plants we need for food rely on pollination.

And it isn't just our food that relies on these little insects...

Bees also pollinate around eighty percent of wildflowers in Europe, so our countryside would be far less interesting and beautiful without them.

A study conducted by the Apiculture Entrepreneurship Center of the Universidad Mayor (CeapiMayor) and the Apiculture Corporation of Chile (Cach), with the support of the Foundation for Agrarian Innovation (FIA), concluded that bees are the only living being that does not carry any type of pathogen – regardless of whether it is a fungus, a virus or a bacterium.

A number of different animals also rely on these insects.

Birds and mammals may rely on berries, seeds and also some fruits and nuts that are pollinated by bees. It also has to be said that even some domesticated animals benefit from pollination too! Cows, for example, eat alfalfa, which is pollinated by bees

This point is often neglected, but many trees are pollinated by bees and some other insects, therefore their survival depends quite heavily on the insects.

Oh, and they're great for the economy, too.

So this next piece of news should come as no surprise...

As concluded by the Earthwatch Institute at the last meeting of the Royal Geographical Society of London, bees have been placed at the top of the list of the most important living things on the planet.

They have been declared the most important living things in the world...

And it's all thanks to their major role in our agriculture, environment, economy, and the overall well-being of our planet.

However, despite the news...

Wildlife experts and scientists have been sad to announce that bees have indeed joined the endangered species list.

Recent years have seen a dramatic decline in bee populations...

And almost ninety percent of the bee population has completely disappeared in the last few years.

And the main cause of this?

This devastating decline can be attributed to the uncontrolled use of pesticides, a lack of natural flowers, and deforestation.

It's completely our fault.

We've been steadily wrecking our planet for years.

We've been gradually burning down our forests, we've been destroying our coral reefs and now, as a result, we're now killing our bees.

But can our damage be reversed?

Remarkably, there is still hope. Activists believe we need to immediately prohibit the use of pesticides, promote completely natural agricultural alternatives and carefully monitor the health and welfare of our bees.

We need to act fast.

Because our planet isn't going to survive much longer in its current condition. Greenpeace agrees, saying we can restore and protect the world’s bees using ‘common sense actions’ such as banning the 7 most dangerous pesticides (including 3 nicotine culprits), protecting pollinator health by preserving wild habitat, and restoring ecological agriculture.

Many celebrities have joined the cause in an attempt to raise awareness.

And maybe the most wonderful example is Hollywood icon, Morgan Freeman. Recently the actor transformed his huge 124-acres land in Mississippi into a bee sanctuary, in order to protect the species. "There is a concerted effort for bringing bees back onto the planet... We do not realize that they are the foundation, I think, of the growth of the planet, the vegetation," Freeman said in an interview.

Here's a nifty little video created by the YouTube channel, AsapSCIENCE, which may outline just how doomed we are without the little insects.

And, lastly, who remembers what Einstein said?

Einstein's saying about bees has never been truer. "If the bees disappear, humans would have 4 years to live," the famous physicist once said. Listen to Einstein, people. Save the bees.