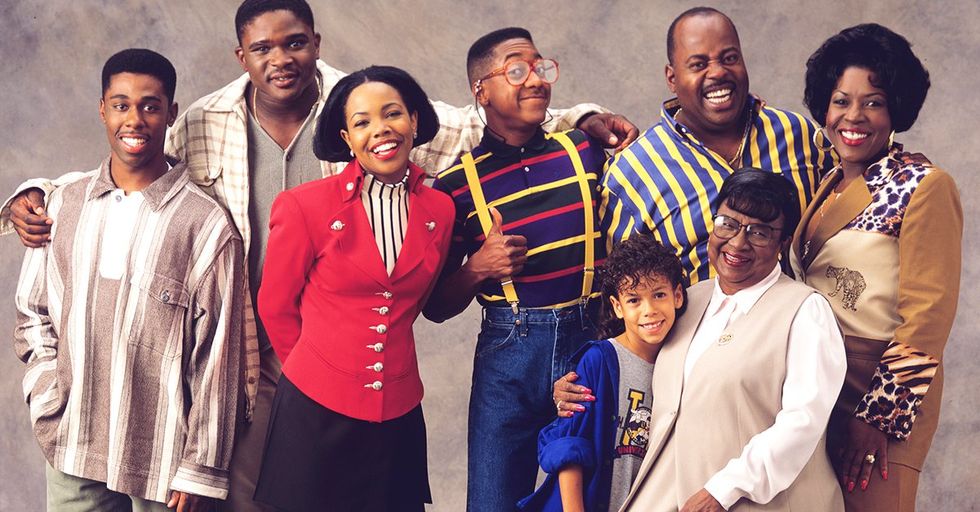 Family Matters doesn't get the credit that it deserves.

Sure, it's got Steve Urkel and his red suspenders and his catchphrase immortalized in history, but really, everything about that show was great.

It ran for nine seasons, which is a huge accomplishment!

Carl Winslow and his family (and, reluctantly, Steve Urkel) found their way into our hearts, but there are some facts from behind the scenes of the show that we bet you don't know!

Family Matters was a spinoff of em>Perfect Strangers

. It's true! Harriette, the matriarch of the Winslow family, was a character in the third season of Perfect Strangers. She was the elevator operator at the fictional newspaper where the main characters worked.

Steve Urkel was only supposed to appear in one episode.

Can you imagine the show without Steve Urkel always bursting in? But when he was introduced halfway through the first season, he was originally only supposed to be in that one episode. Obviously, that didn't happen.

Steve Urkel is based on a real guy.

The co-creator of the show, Michael Warren, has a friend named Steve Erkel, who was the inspiration for the iconic character. I imagine the character is a little more extreme than the real Mr. Erkel, though.

No one could have predicted how popular Jaleel White's character would become, and once he reached rock-star status, there was some tension on set surrounding his success. Some people were jealous, but relationships between cast members got better with time. The next one will definitely surprise you.

Jaleel White was forced to shave and to refrain from exercise to keep him looking young.

Jaleel White obviously matured over the years as the show went on, but no one wanted a super buff Steve Urkel, so he had to stay clean-shaven and spindly to keep up the facade.

The real-life Winslow house is still in Chicago.

And it looks pretty much the same! Some TV houses end up renovated and looking completely different, but not the Family Matters house.

Family Matters is the second-longest running sitcom about a black family.

Family Matters ran for nine seasons, which is crazy impressive. But the longest running is The Jeffersons, which lasted a whopping 11 seasons.

The family's address inexplicably changed in the middle of the show.

The Winslows started out at 263 Pinehurst Street, and they never moved during the course of the show, but after a few seasons, their address was 263 Elm Street. Hmmm...

Jaleel White and Reginald VelJohnson both contributed as writers on the show.

They didn't just act! VelJohnson has a writing credit on two episodes in seasons six and eight, and White wrote two episodes, one in season five and one in season eight. The next one is sure to make you scratch your head.

The original theme song wasn't "As Days Go By."

It was actually "What a Wonderful World" by Louis Armstrong! Who knew?!

But then the theme song was scrapped altogether by season seven.

The show gave up on the theme song starting in season seven, just playing the credits over the opening scene instead.

Jaleel White was almost a Huxtable.

Believe it or not, Jaleel White was pretty far into the process of auditioning for the part of Rudy in The Cosby Show before he landed Family Matters. Yes, you read that right. Rudy was originally intended to be a boy.

Reginald VelJohnson is the only member of the cast to have appeared in every single one of the show's 215 episodes.

You read that right! Not even superstar character Steve Urkel was in every episode (because he wasn't introduced until halfway into the first season).

VelJohnson is one of the most prolific TV cops.

In addition to playing a cop on Family Matters, he also played a police officer in Ghostbusters, Turner, and Hooch, Die Hard, and Die Hard 2.  The next one will probably make you go, "Oh yeah!"

The youngest Winslow child, Judy, was ceremoniously written off the show.

She was in the first four seasons of the show, but when the actress demanded more money and the producers said no, she disappeared from the show without a trace. There was no mention of her ever again.

Even though Darius McCrary played the older brother on the show, he was actually younger than Kellie Shanygne Williams, who played Laura.

She was only a month older than him, but still, it's gotta suck to end up the middle child even when you're the oldest one.

Richie was played by twins.

Steve Urkel and Laura were supposed to get married in season 10.

Season 10 never happened, but it was all planned out that Steve and Laura would get married in season 10. Instead, they get engaged in the series finale.

You may not remember this, but JoMarie Payton left the show after playing Harriette for eight-and-a-half seasons. Judyann Elder played her for the remaining half a season. Payton maintains that she left because she just wanted to do something else. Share this with the biggest Family Matters fan in your life!