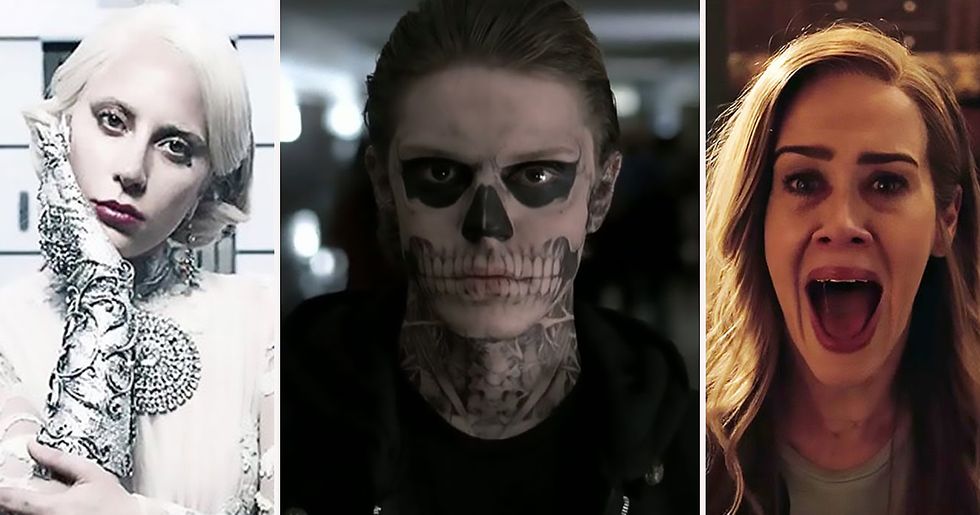 When it comes to horror TV shows, there's nothing out there quite like Ryan Murphy's American Horror Story. The show - which first aired back in 2011 and is still going strong - has remained hellishly terrifying season after season. It's covered the classic haunted house genre, witches, asylums, freak shows, cults - basically, every single thing you've ever feared, AHS has done it.

Whether you're a longtime fan or you've recently binged all the available seasons, there are certain details and facts that you may not know. After all, this show is a lot to take in. But throughout the seasons, there are facts and details as horrifying as the plotlines! Whether it's a hidden clue or a real, historical fact that inspired the show, there is so much more than meets the eye when it comes to AHS.

We've rounded up many of the details and facts that you probably missed throughout American Horror Story. You won't be able to rewatch the show without thinking of these things!

In Murder House, Vivien Harmon's twin pregnancy is totally foreshadowed. Vivien would ultimately die while giving birth to her twins (only one of which would survive), and this moment in season one seems to be serving up a pretty big hint about that plotline...

You've probably seen the actual Murder House before. It was used as a frat house in a Halloween episode of Buffy the Vampire Slayer. In a horror fan's dream world, these two shows exist in the same universe.

Tate Langdon is one of the most horrifying characters from AHS. There's a moment when he asks, "You think I'm crazy?" This totally has to be a clue about the Asylum season. After all, everything is connected in the world of AHS. Pretty creepy.

Remember the super creepy Rubber Man part of season one? I'm shuddering just thinking about it. Well, the fact that Ben and Tate have very different eye colors could mean that Vivien is actually color blind. Wouldn't she realize that her husband wasn't the one in the costume if she saw their eyes?

Speaking of the Rubber Man... Here's an interesting tidbit about that costume. Apparently, it was super difficult for Evan Peters to get in and out of it, so he had to be entirely lubricated before putting on the costume. Talk about dedication to a role!

Remember how intense the Asylum season was? Apparently, it was so intense that Lily Rabe and Zachary Quinto would play music for the cast to relieve some of the tension.

Sarah Paulson has been a constant in the AHS cast. But did you know that she signed up for the show without knowing anything about her character or that she would be coming back season after season? Yep. Paulson signed on because she knew Ryan Murphy from working with him previously.

Remember the character Spalding from the Coven season of AHS? His makeup is actually an ode to another horror franchise...The Rocky Horror Picture Show. The character's look was slightly based off of Riff Raff from the musical horror comedy.

Twice the heads, twice the time

You probably remember Sarah Paulson's two-headed character, Bette and Dot. But here's something you probably didn't know about it: All of her scenes as Bette and Dot took roughly 12 to 15 hours to film!

The Cult season of AHS was actually foreshadowed in the Roanoke season... In Roanoke, Denis O'Hare plays Dr. Elias Cunningham. There's a scene where that character says he's been reading a book that's similar to Helter Skelter.  Well, we know that Helter Skelter is about the Manson murders. In Cult, Evan Peters plays Charles Manson.

If you look closely in the background of a season during the seventh season, you'll see something very interesting. During the scene, there's a terrifying mass shooting while Kai is speaking at a political rally. But you'll notice that the face on Kai's campaign poster looks a lot less like Kai, and a lot more like Tate Langdon from Murder House. A coincidence, or the genius of Ryan Murphy? I'm inclined to think the latter.

The telling is in the wine label... In the Cult season, Kai goes to Detective Samuels' apartment to make a delivery. If you look closely, you'll see some wine bottles that are placed next to a stereo. One of the wine bottles has a label that is Michael David Winery's Freakshow Cabernet. That's a definite nod to the fourth season.

In one of the last episodes of the Cult season, you'll catch a glimpse of the "Twisty the Clown Chronicles" comic book. Pretty disturbing.

Once again, Bette and Dot were very difficult to shoot. When shooting, Sarah Paulson would wear an earpiece and listen to pre-recorded dialogue as one of the twins. That way, she could listen to herself while playing the other twin.

Lady Gaga wowed audiences with her shattering performance in A Star is Born, but before that role, she was on AHS. And here's a fun fact: she actually contacted Ryan Murphy asking for a role.

American Horror Story is different than other TV shows in this one very particular way... It's still shot on film!

Sarah Paulson and Ryan Murphy actually go way back. They met all the way back in 2004 after wrapping shows on the WB. They were clearly destined to cross creative paths one day.

In a different world

Originally, Ryan Murphy had other plans for who Sarah Paulson would play... And it was a character that wasn't on American Horror Story at all! Murphy wanted to cast Paulson as Emma Pillsbury on Glee. The role ultimately went to Jayma Mays.

American Horror Story wasn't the first time that Sarah Paulson and Jessica Lange worked together. The actresses were on Broadway together in The Glass Menagerie.

In fact, Lange actually had a lot to do with Paulson getting cast on AHS. Apparently, Lange went up to Murphy one night at a benefit and asked, “Can't you find something for Paulson [in Murder House]? Thank goodness she did that! What would AHS be without Sarah Paulson?

Evan Peters has a very interesting reason for wanting to get into acting. Peters became an actor because he wanted to meet the Olsen twins. Honestly? I can't blame him. This is a very legit reason behind choosing your career path.

Remember the couple who once owned the Murder House? Well, Neil Patrick Harris and David Burtka almost played that couple! They turned it down since the real-life couple had just played a couple in another movie.

Asylum is one of the most disturbing seasons of AHS. But the detail that went into creating the set was amazing! The crew actually hand-built the interior; roughly 60 carpenters helped to create it.

AHS was so intense for Jessica Lange that she actually suggested doing "The Name Game" musical number in an episode because everything else they filmed was so depressing and grim.

Sarah Paulson shot the electric shock therapy scene in Asylum on her first day of shooting.

Shooting AHS was not a walk in the park for Sarah Paulson. She said in an interview, "There were moments where I did go into a corner on the set and just bawl my eyes out because it was just a very traumatic thing to play."

Can you see me?

Shooting was pretty intense for Paulson. In Coven, her character Cordelia loses her eyesight. Paulson couldn't actually see because of the contact lenses she needed to wear when shooting.

Kathy Bates has been in several seasons of AHS. For her character in Freak Show, she had to adopt an intense Baltimore accent. It was actually so hard to learn that Bates spoke in it even when they weren't shooting her scenes.

Not everyone on American Horror Story was an actor. Ben Woolf - who played Meep in Freak Show - was a preschool teacher in real life.

Sarah Paulson's Freak Show character Bette and Dot took a lot of work. The special effects team created two animatronic heads, and the conjoined twins were a mix of those and effects added in post-production.

Evan Peters - who has been in every single season of AHS, save for the upcoming season - was originally supposed to play Tristan in Hotel.  That would've been quite different!

Quite often, Peters plays super dark characters on AHS. You have to think that it takes a toll on the actor, IRL. Peters has said that the hardest scenes to film were the ones when Mr. March kills a girl as he has sex with her. He said, "I blocked them out. I’m like, ‘I can’t even think about it.'" Probably for the best.

Peters also had no idea that he would be playing several roles in Cult. He found out when they began shooting the season. What a surprise!

The AHS storylines are already terrifying enough, but Ryan Murphy actually put in Sarah Paulson's real-life fears for the Cult season. Those include clowns, bees, heights, and trypophobia. Ummm, no thank you!

American Horror Story is back for its 9th season this September, so if you're dying for your AHS fix after last season's explosive Apocalypse, you don't have too long to wait.

The theme for the season, named American Horror Story: 1984, was revealed in April and horror movie fans rejoiced as we were that told the season would be inspired by '80s slasher movies, paying homage to classic horror films such as Nightmare on Elm Street and Friday the 13th.

But now it's all hands on deck, as show co-creator, Ryan Murphy, posted a teaser to his Instagram to celebrate the first day of filming, giving us a taste of the characters that will make up AHS: 1984 and all we can say is that it's very '80s.

While we're set to see some new faces, as well as some returning ones, Sarah Paulson and Evan Peters, who have been pivotal to the show, as well as pretty much being the faces of AHS, are notably absent from the cast - leaving us even more intrigued to see who could possibly replace them and what the new season will be like. Although, we will be holding out some hope for a possible cameo.