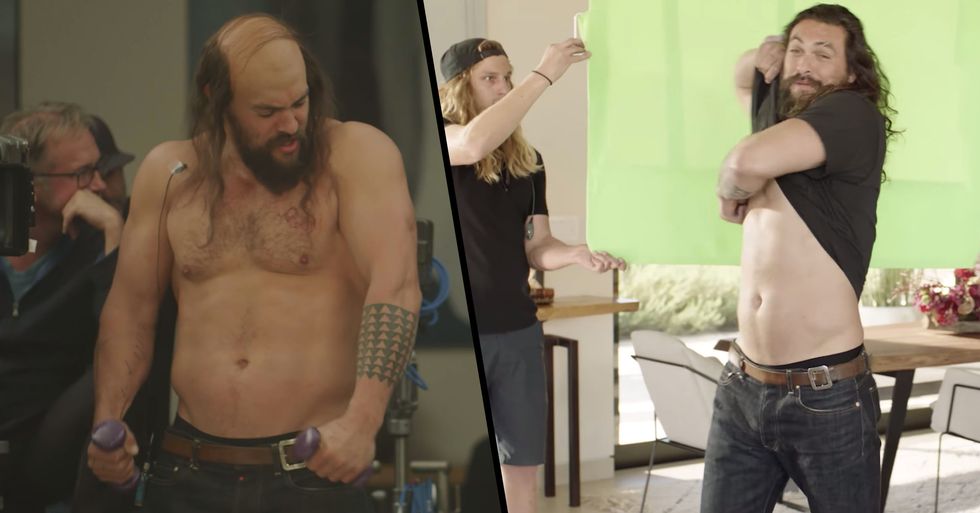 Now he's a verified superstar - with an icon for a wife and an enviable career. But his latest appearance in a Super Bowl commercial is unlike anything we've ever seen him in before ... and the internet is not loving it.

Keep scrolling to see the behind-the-scenes video in which Momoa exposes all the secrets behind the commercial.

Because in an upcoming role for a Rocket Mortgage commercial for the Super Bowl, Momoa is getting real comfortable...

The sixty-second ad aired in the first half of the game.

But the sneak-peeks did not prepare anyone for what the ad actually showed...

But what actually went down was anything but.

For a start, this happened.

Yep, that's right - Momoa relaxed after a long day by taking his actual muscles off.

Then it got worse.

Momoa went on to take off his pride and joy - that mane of flowing locks. Yikes.

It was the stuff of nightmares.

Honestly, we don't want to see these pictures ever again.

Well, here's the ad in all its glory. Watch at your own discretion and keep scrolling for the behind the scenes version where all the secrets are exposed.

Many were just plain shocked.

It did make for some rather difficult viewing, we'll admit.

Many made this point...

Were we slightly... led astray by those teaser clips?

Perhaps he's not that good looking after all - we're just blinded by the muscles and hair combo!

Others were more upset than anything.

Now, a video on all the behind-the-scenes action has been released...

It shows us how Momoa managed to get into the role and all the dedication with hair and make-up trying to create all these different versions of him.

Let's be honest, this commercial is going to haunt us for years to come... And for another Super Bowl commercial that got everyone talking, scroll on!