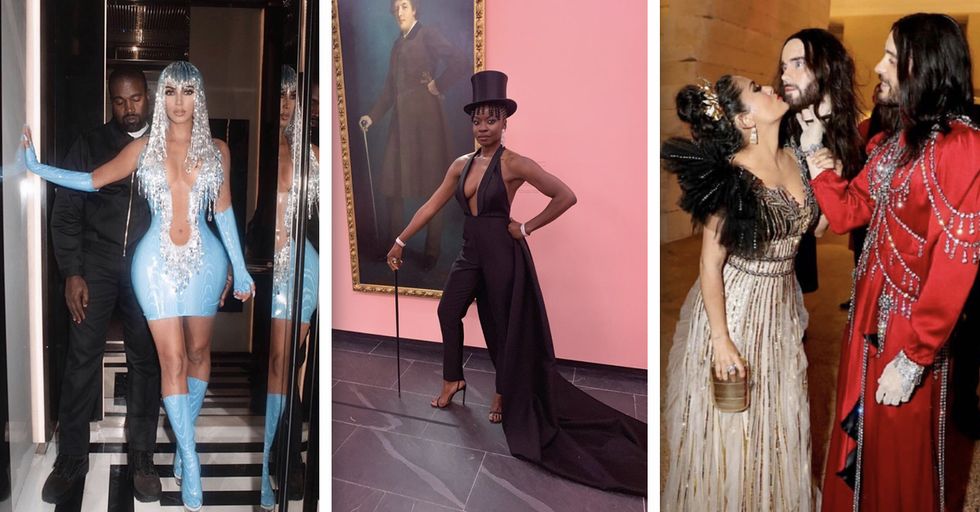 Last night was New York City's annual Met Gala. It's a night of pure glamour, where fashion comes together with art in the most fabulous of ways. Each year, a theme is established for the Met Gala. This year's theme was "Camp" based on Susan Sontag's 1964 essay, Camp: Notes on Fashion.

Every year, there are celebrities who take the theme seriously and show up looking on point. Of course, there are also those celebs who show up looking like they had no idea there was a theme at all. The red carpet is full of fashion risks, hits, and misses.

While the red (or in this year's case, light pink) carpet is definitely the highlight of the event (Lady Gaga had four costume changes, y'all), the best part of the Met Gala is what celebrities post on social media.

Here's a round-up of the best celeb Instagrams from the night, which...let's be real...are way juicer than the red carpet itself.

One of the best parts of the Met is when random celebrities come together. Like this picture of the Kardashians holding Jared Leto's head. Ummm...what? Actually, it's better to just not ask questions. What happens at the Met, stays sat the Met.

Match Made in Heaven

Shawn Mendes posted this IG story with Lizzo and melted everyone's hearts. Do I sense a collab in the future?

Spider-Man: Homecoming costars Laura Harrier and Zendaya snapped a cute selfie at the Met afterparty. With one picture, did they prove blondes have more fun?

It's Lizzo's world and we're all just living in it. The singer (who recently hit a million followers on her Instagram) was having the night of her life. This pic of her and Sarah Paulson that she posted on her IG story is adorbs.

Lizzo and J.Lo make quite the stunning pair. Do I sense another collab in the air?

The pair you didn't know you needed.

Mark Ronson posted this cute picture of Harry Styles and Julianne Moore. I didn't know I needed this pair until right now.

Justin Theroux captured a cool moment between Harry Styles and Alexa Chung. Okay, but how did she get down from there?

Zendaya was the belle of the ball.

Zendaya's Cinderella-inspired dress required some serious planning. She posted an Instagram that gave an exclusive behind-the-scenes peek into the engineering of her magnificent dress.

And why would anyone want to stop this queen? Lizzo posted this amazing video which shows her rocking her Met Marc Jacobs coat in the airport the following morning. None of us will ever be on her level.

Tracee Ellis Ross keeps the theme going, even when she's in the bath. This woman continues to shine in everything she does.

She also knows how to rock an entrance. That car, though!

Zendaya might've been Cinderella, but Kendall and Kylie were serving fierce stepsister vibes. They absolutely killed this look. They didn't come to play.

Lupita Nyong'o captured the essence of "camp" in a gorgeous, bright ensemble. Her behind-the-scenes Instagram is drool-worthy.

Gemma Chan switched up her afterparty look for a fun, sequined dress. That pink ombré is everything.

Kim went full Kim K for her afterparty look. Kanye, however, kept it the same. Did anyone tell him he was going to the Met Gala?

Bathtub Pics or It Didn't Happen

What's the point of dressing up if you don't pose dramatically in a bathtub? Lily Collins struck a pose before the afterparty.

"The fake look away" is a great piece of advice for anybody trying to model. Though something tells me that unless you look like Michael B. Jordan, it just won't have the same effect...

Justin Theroux also posted this snap of Cardi B. Is it too much to ask that this be hung in the Louvre?

Life is a Cabaret...

Danai Gurira struck a pose with a portrait of Oscar Wilde, her inspiration for the night.

The Art of Janelle

Janelle Monae was a walking piece of art at the Met Gala. Also, she is posture goals.

Rita Ora shared a bit of her pre-Met process. It included a lot of dancing and a lot of giggling. What more could you need to get ready? Get it, girl.

Lena Waithe is always phenomenal. The back of her suit reads, "Black drag queens invented camp."

The Drama of it All

Halsey's dramatic pose is a whole mood. If there's not a bit of drama at the ball, why bother to go?

Yara Shahidi knows how to pump herself up for a night at the Met Gala - by singing a little Outkast.

Ciara Shut It Down

Ciara's '70s camp vibes were a showstopper. Hands down, this was one of the best looks of the night.

Mindy Kaling is the new Mother of Dragons

Awkwafina posted this too-cute selfie with Constance Wu and Priyanka Chopra. Who else wants to join this girl gang?

Awkwafina also posted a pre-Met pic with her styling team. They absolutely killed it - she looked fabulous.

A Husband and Wife Moment

Priyanka Chopra and Nick Jonas are so cute it's ridiculous. But, I have to wonder...what is she looking at? We'll never know...