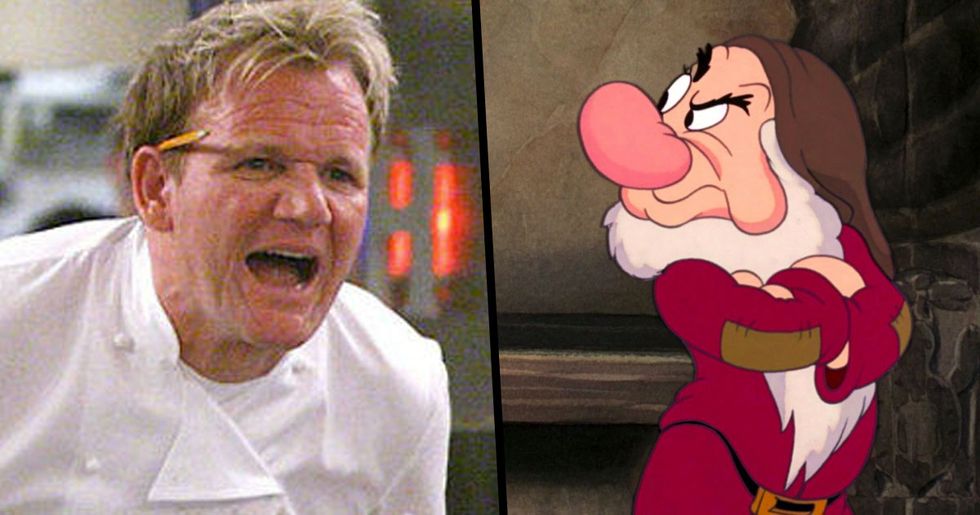 Being Grumpy Helps You Live Longer And Earn More, Apparently

I'm sure everyone would like to live a good long life (and make plenty of money), right? And science experts are always looking for an undiscovered factor for improving health. Well, now scientists and psychologists may have found a factor that does both!

In our world, 'grumps' aren't so popular. We're all taught to avoid them – or, if we're grumpy, to turn that frown upside down in polite company. Also, how about all those platitudes? "You catch more flies with honey than with vinegar!" Or maybe..."There's no use crying over spilled milk!"

It seems like we're not supposed to show that particular range of emotions. But sometimes we've gotta cry over that spilled milk. Sometimes, we're just having a bad day. Heck, we've all met people who just tend towards the grumpy side in their day to day life. Now it may be that there are a few benefits to feeling those feelings, negative and all. So, check out this fascinating information.

Scientists and psychologists are now suggesting that being bad-tempered and pessimistic is actually beneficial in many aspects of life, according to the BBC.

As it turns out, a grumpy attitude might help you earn more money, enjoy a healthier marriage, and live a longer life!

We place a premium on positivity.

These days, everything is about trying to be happier...all of the time. Books and other media on attaining personal contentment are flying off the shelves like never before, and people all over the world have thrown themselves head-first into the pursuit of happiness.

Did you know you can hire a happiness expert?

The United States trains everyone in the army in positive psychology. Optimism is a subject taught in UK schools. And recently, it's not the GDP you hear about – it's the global happiness index.

So why should we grump it up?

Obviously, we can't live every day of our lives under a dark grey thunder-cloud – that's no way to live. But a tendency towards pessimism (pondering the worst) in some situations has its advantages.

Considering the worst makes it easier to find the best.

Because it turns out cranky folks are better negotiators, better decision-makers, and less likely to have a heart attack. Cynical people tend to have longer lives, higher earnings, and more stable marriages. The reason for this gives new credence to the phrase "a pessimist is what an optimist calls a realist."

Because constant optimism may be less helpful than you think.

Good moods have been shown to come with risks. They sap away a person's drive, detract from attention to detail, and tend to make people more gullible and selfish. When you only see the good, it can blind you to the bad, even when you really ought to be dealing with the bad. It has also been known to cause overeating, binge-drinking, and unsafe sex.

Essentially, our negative feelings aren't there for nothing.

They're adaptive; barring intense mood and personality disorders, we don't experience anger, sadness, and pessimism as a stroke of rotten luck. We feel them for a reason, and in turn, they help us to thrive.

Let's look at some infamous grumps.

Take Hugh Grant, for example. The actor is notoriously moody, dislikes his celebrity, and resents being an actor. Ex-girlfriend Elizabeth Hurley's friends even had a nickname for Grant: 'Grumpelstiltskin.' But it's possible that attitude might have led to his success.

Just look at the figures:

One of our most beloved composers was noted for his temper tantrums.

We're talking about the late great Ludwig van Beethoven. The musical genius wrote his masterpiece of a 5th symphony, and the Ode to Joy – and yet, his deafness is actually thought to be the result of one of his fits of rage.

You know, the guy who established the laws of motion and universal gravitation? He was also pretty grumpy; great at forming (and holding on to) grudges.

We could explore the present day a bit more.

Because Amazon's founder, Jeff Bezos, is known for his angry outbursts (such as "I'm sorry, did I take my stupid pills today?"), but he's also got himself a company worth $300 billion.

So what's the link?

In 2009, Matthijs Baas from the University of Amsterdam began investigating this connection. How did he do it? Well, he recruited a group of student volunteers, and made them angry!

They were split in two groups.

That's because the angry volunteers were more prone to “unstructured" thinking – moments of haphazard innovation. While systematic thinkers are more likely to come up with a number of more standard ideas for something, unstructured thinking lends itself to original ideas that few would think of.

Creativity depends on how easily your mind can travel from one line of thinking to another. So, in a situation where your anger is mounting and your thoughts lose their normal structure, a fit of 'mad genius' might just be the thing you need. Anger gives you an energy boost and prepares your body for action.

Anger begins in the same place as most of our emotions.

And when we feel anger (a threat to our well-being), our bodies are already sending out warning bells before we've fully registered it. Then, chemical signals get us worked up into a frenzy. Breathing, heart rate, and blood pressure shoot up as blood rushes to extremities (which is why angry people are often red in the face).

Normally, we associate this response with physical aggression.

But it's actually connected to more than that. Our 'frenzied rage' response can also boost motivation and lend people the guts and gall to take mental risks.

Basically, don't be afraid to vent.

Bottling up this emotion is definitely not helpful. So whether you vent it out creatively, or by yelling at a stranger on your way to work (it happens), your blood pressure returns to normal and you've managed your anger in a pretty healthy way.

Forced optimism can mean you're repressing a few things.

And repression is decidedly bad for your health which is why turning that frown upside-down is much easier said than done, and maybe not the best advice. When you allow yourself to expel all the anger and sadness inside of you, you're able to purge those feelings and gain the benefits of catharsis.

Scientists took a look at this.

Because initially, you'd think that the high blood pressure associated with anger would heart disease (and heart attacks) more likely, right? But when scientists surveyed a group of patients with coronary artery disease in 2010, determining their levels of anger and suppressed anger, they found something different.

The scientists then monitored their survey participants for the next five to ten years.

During the study, 20% of participants experienced a major cardiac event, and 9% died. It originally looked like both anger and suppressed anger contributed to this, but after reviewing other factors, the scientists realized that anger had no effect on the results, but suppressed anger made a heart attack nearly three times as likely.

The reason behind this isn't entirely clear.

However, other studies have determined that suppressing anger can lead to chronic heart disease. So there's still a pretty noticeable connection.

Anger is also good for negotiation.

A major cause of anger is the realization that your interests are not being valued highly enough. When we're angry enough to remove money, friendship, or loyalty from a relationship, negotiations go our way. Even the faces people make when angry have a purpose. Our bodies are naturally trying to make us look stronger and fiercer than the person we're arguing with.

“Negative moods indicate we’re in a new and challenging situation and call for a more attentive, detailed and observant thinking style," says Joseph Forgas, who has studied how emotions drive behavior for decades. Anger improves our language skills, memory, and makes us more persuasive.

Happiness is great - but doesn't come with the same benefits.

There's a way to test our sense of fairness called the ultimatum game; one player is given money and asked how they'd like to divide it between themselves and the second player. Then, the second player can either accept whatever their decision is – or reject it, in which case neither gets money. People who played while feeling negative emotions showed themselves more conscious of the need for everyone to be treated fairly.

“People who are feeling slightly down pay better attention to external social norms and expectations, and so they act in a fairer and just way towards others," says Forgas.

Not to totally trash happiness, but here's a few other things to be aware of.

Happiness is also associated with oxytocin, the 'cuddle' hormone. And when you're, say, getting cozy with a significant other, the manufacture of oxytocin is both great and to be expected. But too much oxytocin can reduce our ability to identify threats.

That's where the risks come in.

Earlier, we mentioned that too much happiness can cause binge-drinking, overeating, and unsafe sex; and this is why. “Happiness functions like a shorthand signal that we’re safe and it’s not necessary to pay too much attention to the environment," Forgas says.

Even optimism can work in strange (and harmful) ways.

Say you're optimistic about the future, all the time. Everything has a silver lining. Well, ironically enough, fantasizing happily about the future can be extremely de-motivating for people!

“People feel accomplished, they relax, and they do not invest the necessary effort to actually realize these positive fantasies and daydreams," says Gabriele Oettingen from New York University. “People say ‘dream it and you will get it’ – but that’s problematic."

On the other hand, we have pessimism.

Or, should be we say, 'defensive pessimism.' When you're going through life believing that nothing will go wrong, it's harder to cope when something does. Meanwhile, people who employ defensive pessimism subscribe to Murphy's law (the cosmic inevitability that whatever can go wrong, will go wrong). Sounds heavy, but when you've prepared for the worst, you can deal with pretty much anything that comes your way.

Take it from an expert pessimist.

“I’m a little clumsy, especially when I’m anxious, so I make sure to wear low-heeled shoes. I get there early to scope out the stage and make sure that there aren’t cords or other things to trip over. I typically have several backups for my slides: I can give the talk without them if necessary, I email a copy to the organizers, carry a copy on a flash drive, and bring my own laptop to use…"

So, when someone tells you to 'cheer up,' you now have a pretty thorough rebuttal.

Sure, you're being a grump. But hey, you're also taking care of your health, improving your empathy and sense of fairness, and increasing your chances of making good money. So who's really losing out? Share this crazy discovery with the lovable grumps in your life!