Being in a Relationship Makes You Fat, Science Confirms | 22 Words 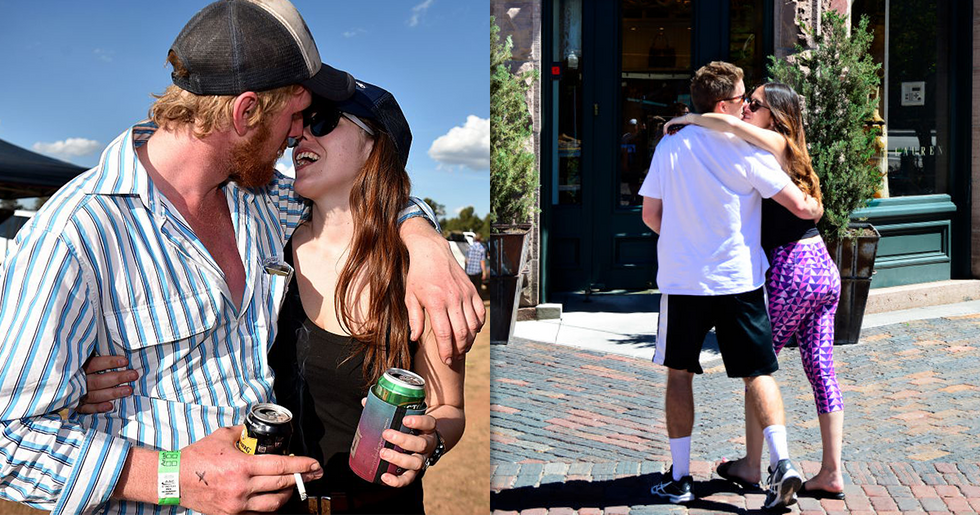 Being in a Relationship Makes You Fat, Science Confirms

Romantic dinners, ice cream dates, and pizza nights while you watch movies. Once you get in a relationship, a lot of those things become part of your regular routine, in one way or another. So, it's no shock that weight gain is bound to happen– but now science has the proof. Not all of us can be the fit Instagram couple we think we are.

An article published in New Scientist echoed what we were all afraid to hear, but it's about time we accept: your relationship is the reason you are getting fatter. There are a couple things to blame but there is no avoiding the truth anymore, no matter how in love we are. I mean, you really can't have your cake and eat it too.

Hey, don't get mad at us. Blame science!

You get a new boyfriend or girlfriend, and all of a sudden, every night becomes date night. Trying new foods together becomes a frequent activity, and you fall victim to posting pictures of your boo and your food on Instagram.

You guys want to spoil each other so you get drinks and appetizers–even desserts sometimes. You're trying to sweep them off their feet. Nothing is too much for your bae.

You start to cook for each other and make homemade meals because eating out is starting to get a little expensive, but you still want the romance and you definitely want good food.

You and your bae can be found munching on some snacks no matter where you go, and you love each other for it. You know their favorite snacks by heart and are always willing to buy some and bring it over for movie night.

Then, the two of you get comfortable with one another and start staying in more, ordering take-out on the couch and watching Netflix for hours.

You, me and every snack in the world

Before you know it, you both look a little rounder than you did when you first started dating.

It feels like it happened overnight and it can be alarmingly hard to believe that you have put on some weight since the beginning of your relationship.

An Australian study analyzed 10 years of research with over 15,000 participants and have found that settling down and being in a relationship increases the chances of you and your partner gaining weight.

The study at Central Queensland University showed that couples typically weigh more than any single folks.

Scientists also believe that couples care less about impressing each other which makes it easier to gain weight because they do not feel worried about what they look like.

Working out may become less of a priority because you already have a bae, so who are you trying to impress? There's no need for a 6-pack anymore.

Once you get in a relationship, you don't have to worry about impressing others or looking your best when you go out. Only your bae needs to think you look good.

Stephanie Schoeppe, a lead author on the study, said, "When couples don’t need to look attractive and slim to attract a partner, they may feel more comfortable in eating more, or eating more foods high in fat and sugar."

It's a tough truth, but some people do tend to get to a level of comfortability with their significant other to the point that their weight is not of much concern.

It's not only unhealthy

The results published in PLoS ONE showed that couples do eat more fruits and vegetables, and even stayed clear of fast food or alcohol. But this weight gain is most likely coming from the fact that "couples are eating more of all food types together."

One thing the study did find was that people tend to drink and smoke less once they get into a relationship. So that's one positive.

When you're single, you can drink for two instead. That seems like a fair trade.

The heart wants what it wants

Many social or dating activities revolve around drinking and eating, so it's hard to avoid it all. Dr. Jerica Berge said date nights might to be blame and the weight gain "maybe because social behavior in marriage commonly revolves around eating occasions."

Stephanie warned that having kids only increases your chance of gaining weight because parents often tend to do a lot more munching on their kids' leftovers and snacks.

In love with food

There's a lot of love going on, whether that's with food or with your significant other.

So if you're in a relationship and feel like you're putting on the pounds, those pounds will not go away once you start having kids. It's only going to get worse.

The research showed that couples and single people often exercise about the same on average. So if you're single, it doesn't mean you're automatically more fit.

Weight gain can also be pointed towards one person in the relationship. If one partner tends to have unhealthy habits, it can negatively affect your habits as well. Your significant other can be a friend or foe. It's called the ripple effect and science says it can be pretty serious.

Couples who work out together, stay together. That's not science but it sounds catchy.

Dr. Berge said it's also common for couples to want to try and stay healthy to extend the span of their relationship. If you want true love to last forever, you better start eating your veggies.

Not about the pounds

It is not about how much weight you put on, it's about keeping each other healthy and happy. Sometimes, that means going for a walk together instead of Netflix for the fourth hour.

One person commented on the article saying, "It happened to me I gained 20 pounds in a year because all we did was stay in bed and go out to eat lol... I woke up one day and saw myself in the mirror and said oh no, that's not me. Started walking a lot then running then the gym and got back to my real self. 17 years on we are still together."

It's not too late

Go for a romantic walk with your boyfriend, or make a sexy salad for your girlfriend. Share this article with all your couple friends and tell them that science never lies, but it's never too late to start some healthy habits.