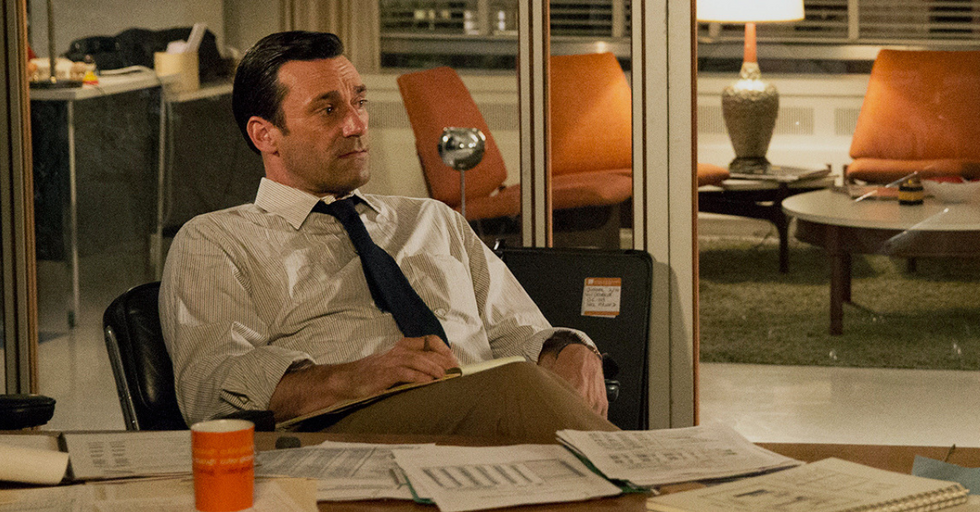 Being Too Handsome Is Bad for Your Career, Says New Study

If your looks could kill, they may also be killing your shot at having a successful career. Beauty standards seem to be constantly changing, but what doesn't really change is society's desire to promote beautiful people. But do good looking folk really have that much of an advantage?

We all know that a handsome man in an office is usually envied by the rest of the workforce, but it turns out that beauty is in the eye of the office manager, because being attractive is actually more harmful than helpful in the workforce.

Apparently, if you're too good looking, you might end up at a dead end in your career. It seems that it's not all glitz and glamor as a handsome human being and your #careergoals will take a hit if you've got a great jawline, a beautiful smile, sparkling eyes, or, even worse, all of the above.

Is being good looking worth it? If you care about your career, maybe not!

There's always that one guy in the office.

Each office has its own set of characters, but it seems that there are some basic similarities across the board, no matter the business.

The one that is a-little-too-handsome.

Unfortunately, there's always one charmer in the office that outshines all the other workers with his outstanding good looks.

How can someone walk around being that good-looking?! It feels like we can't catch a break, not even in the office.

Good looking people can get away with a lot.

Free drinks, endless phone numbers at the bar, special services at different events. They always have a leg-up in life and there's nothing we can do about it.

Are you the cutest in your cubicle?

Maybe you're the straight stunner in your office and you didn't even know. Turns out, the only way to know is if you haven't been promoted in years.

There is more to life than being good looking!

Maybe people who have great looks don't really have it all. Their lives could be harder than we thought.

We found thier kryptonite!

Research has found the silver lining, proving to the world that handsome men will apparently never have a perfect life.

That charming smile won't get you everything that you want.

A new study reported in Men's Health UK that men who are good looking have a harder time making money moves in their career fields.

Your good looks could threaten others.

Good looking men are seen as more of a threat to their male bosses. Apparently, a good looking man who is successful is not something that other men support.

Let's put it to the test.

The London Business School and the University of Maryland put their genius brains together and gathered four office experiments in the UK and the US to test their hypothesis.

In the name of science!

Participants in the study were given scenarios in which they had to choose between a few candidates to fill a specific vacancy.

The results were very interesting, to say the least.

At least they were honest.

They straight up judged a book by its handsome cover!

The researchers presented the offices with multiple candidates for an open position. The options basically had the exact same resumés and cover letters but there was one difference...

Beware of the chiseled good looks!

The pictures that accompanied the resumés showed men who displayed various attractive features, and researchers started to see a trend.

Luck was not on the side of the stunners.

It was a negative attraction.

"When men hire other men, their decision is negatively affected by the attractiveness of the candidate and the type of job," the article found after the research was done.

Basically, you might get rejected for being too handsome.

Good-looking guys were rejected from positions with higher influence and individual talent.

But they might have more luck in less important positions!

Some bosses have dark ulterior motives.

The office hunks are more likely to work in roles wherein team performance is rewarded, instead of individual performance.

I knew that people were selfish but I didn't know that the workforce was that messed up!

How do we save these handsome humans?

It's not their fault they are so good looking! There's got to be a way to make this process fair for all types of people, including the gorgeous ones!

We need to bring in some outside forces.

Professor Sun Young Lee, lead researcher at the University of Maryland has a possible solution. She believes that the best way to avoid this is probably just outsourcing the hiring process to a recruitment company.

We've got to be aware of these things!

These guys are much more than their good looks.

Even if they are qualified and fit the position perfectly, if they've got a strong jawline or perfect eyebrows, that might over qualify them, so they'll get a hard no from other men.

Is this legit reasoning?

Would it still hurt if someone told you that you didn't get the job because you were too handsome?

I guess you couldn't be that mad.

I'd be pretty mad I didn't get the job, but at least I got a compliment out of it.

Apparently, being good looking can have some rough consequences.

Another study in Psychology Today found that this is a pretty normal trend in the workforce, and women are affected by it as well.

It's a dark world out there.

"Being good-looking can cost you opportunities - jobs, scholarships, promotions - depending on the gender and attractiveness of your evaluator," Psychology Today stated.

We don't need another threat.

"Their presence is a threat - they 'make the rest of us feel like we aren't pretty enough.' So, given the choice between a candidate with average looks, and one who is gorgeous, why choose the latter and end up feeling inadequate?" the article concluded. This is so wrong... but it does kind of make sense.

It's a good day to be a regular looking human being.

Today, I am thankful to not be a super-model. Share with your fellow non-super-model friends to celebrate!