Bekah M. From 'The Bachelor' Is Currently on a Missing Persons List in California | 22 Words 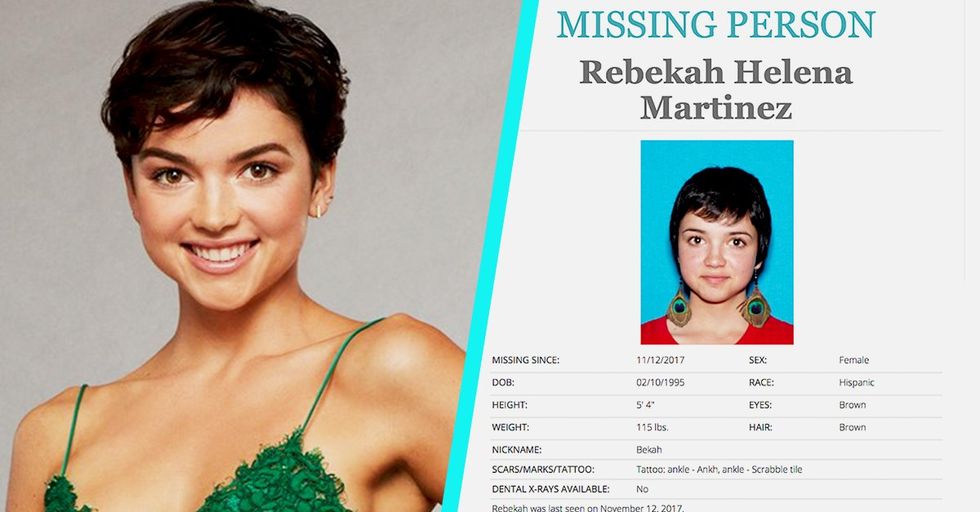 Bekah M. From 'The Bachelor' Is Currently on a Missing Persons List in California

In the strangest plot twist yet, The Bachelor's youngest contestant, Bekah Martinez, was reported as a "missing person" in Humbolt County, CA, until just this week. Why? No one is quite sure.

But here's what we do know - besides the fact that this crazy story is thoroughly entertaining!

Bekah M has been a frontrunner on The Bachelor ever since Arie laid eyes on her.

But the 22-year old seems to have left a bit of drama behind when she decided to appear on the ABC show. Apparently, she was classified as a "missing person" in her home county.

So, how did this happen?

Bekah was reported as "missing" to local law enforcement in Humbolt County on November 18 - by her mom! Her mother alleges that she hadn't heard from her daughter since November 12.

So where was Bekah?

Apparently, she told dear old Mom that she was going to work on a marijuana farm. Which is totally normal! However, this timeline doesn't add up.

Nope. In fact, she might have even been filming The Bachelor already.

While specific dates are still unclear, we do know that ABC released the first promo for The Bachelor on November 18 (the day Bekah was reported missing!), so wouldn't she have told her mom about this slight change of plans by then?

Maybe Mom was worried because her darling daughter is younger than we are all being led to believe.

Here's what Bekah looked like just one year ago. She sure has aged a year or seven since posing in this Christmas pic with her sister. (Arie: Run. You in trouble, sir!)

Bekah wasn't missing after all. She was being groped on national television by a 36-year old man.

Bekah is us listening to Bekah’s impersonation of Krystal! #TheBachelor https://t.co/FaYH7AgHW2
— The Bachelor (@The Bachelor)1517276310.0

After the Northcoast Journal published photos of missing persons in their area, a Bachelor fan notified them that one of the photos was Bekah. She was removed from the missing persons list, and Bachelor Nation gasped in unison.

Bekah isn't reacting dramatically to the crazy story, though.

Maybe she just wanted to pull a Krystal and hide from life for a while?

She's even joking on twitter about her mom overreacting.

But she's pissed that her driver's license photo is making the front page of every national news site right now! Probably because she looks fourteen years old in it. <side eye>

We can only guess who's happiest to hear about Bekah's travails.

Laughing all the way to the funny farm, Krystal is probably doing high kicks and deep squats at this very moment in celebration of Bekah's tarnished image. She could use a moment out of the sketchy spotlight, after all.

Bekah's story also surpasses every weird factor on the show by at least 100 points.

Even Kendall's propensity for carrying dead animals around in her backpack.