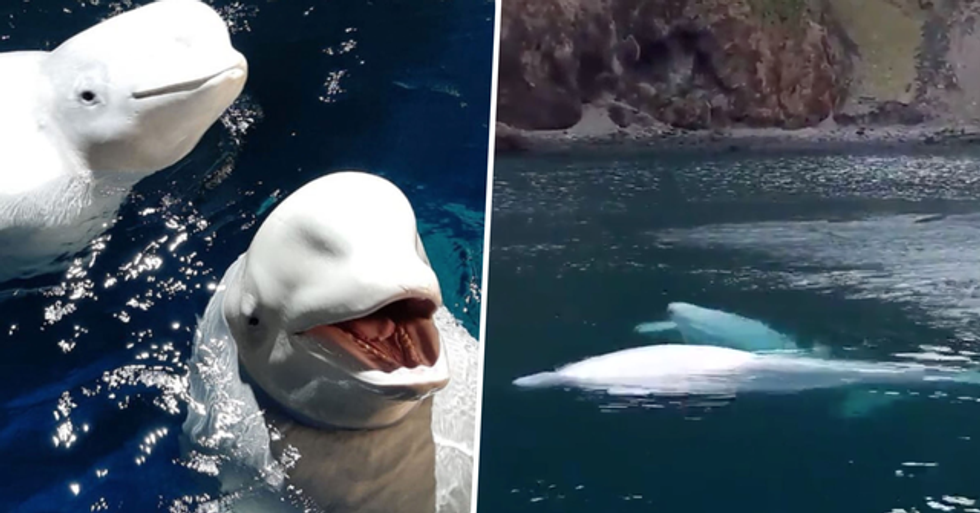 Last month, we brought you the story of Little White and Little Grey - 2 beluga whales rescued from a lifetime of captivity in China...

And now, we are bringing you the highly anticipated news of their first official taste of freedom.

This week, heartwarming video footage showed the duo, who had both been forced to perform as show animals in their past lives, take their first swim in the open waters of their new home in Iceland.

It was an incredibly moving watch...

@BelugaSanctuary Such an amazing sight! All the best to all the folks working so hard for these well deserving souls. So beautiful 🥰
— Waneeta Fisher (@Waneeta Fisher)1601278035.0

And people all over the world have been rejoicing at the sight of the whales experiencing their first - and much deserved - taste of freedom.

Now, this news has been widely celebrated because more people than ever before are now protesting against the captivity of marine animals.

Since the 1960s, whales and dolphins have been repeatedly captured from the wild and forced into small tanks for our own amusement.

There's something quite distressing about seeing such intelligent and majestic creatures forced into chlorine tanks for the sole purpose to entertain and make money for humans.

However, in 2013, people's attitudes on the matter changed forever.

And, last month, there was another huge development in this fight.

Little White and Little Grey, 2 beluga whales, were rescued and freed from an aquarium in Shanghai, China, where they had been forced to perform as show animals for the last decade.

Like other belugas, Little White and Little Grey are incredibly intelligent...

With scientists calling their species the "most intelligent creatures of not only the ocean but the entire animal kingdom."

The duo were originally captured by a Russian research center...

But, ten years ago, they were transported to Shanghai's Ocean World, where they were forced to perform tricks and shows to audiences in exchange for fish.

Obviously, this isn't the life for intelligent belugas like Little White and Little Grey...

So the U.K.-based charity, Sea Life Trust, decided to step in.

After over a decade in captivity, the pair can finally experience a taste of freedom.

Last month, Sea Life Trust shipped Little White and Little Grey 6,000 miles to their new home in Iceland, where they will swim in the open ocean once again.

To get them out of the aquarium and shipped halfway around the world...

Little Grey and Little White had to be put into specially designed slings that helped protect their bodies in a lorry, then an aircraft, and finally a harbor tugboat.

"Little Grey and Little White are now in their bayside care pool and will need a short period of time to acclimatize to their new natural environment and all the outdoor elements before their final release into the wider sanctuary in Klettsvik Bay in the Westman Islands off the south coast of Iceland."

But, despite their long journey...

The duo arrived in great health. The statement continued: "The expert team and the independent vets were with Little Grey and Little White throughout the move and said they are healthy and are feeding after the short trip from their landside care facility back to the sea."

For the last month, Little White and Little Grey have been residing in bayside care pools...

As they are slowly introduced and rehabilitated to their new environment.

But this week, they were given their first taste of proper freedom.

Sea Life Trust has shared footage of the whales taking their tentative first swim outside of their care pools at Klettsvik Bay.

It was a huge step for the pair.

Under careful supervision by the expert care team, the whales explored their new surroundings in the first step of the specially designed welfare program, Little Steps, which will eventually see the pair be introduced gradually into the larger sanctuary.

The program allows for the wales to be introduced to the 32,000 square meter bay for short periods of time...

While their wellbeing is closely monitored. The bay itself has a depth of up to 10m and is equivalent to the size of seventeen tennis courts.

At first, the whales were tentative...

The footage shows Little White and Little Grey very slowly leaving their enclosure, all the while staying close to one another.

But, gradually, their confidence grew and they swam around and explored the full bay.

Andy Bool, Head of Sea Life Trust, said: “We’re absolutely thrilled by the progress that Little Grey and Little White have made since moving to their bayside care pools. They are feeding and acclimatizing well to the more natural surroundings as well as all of the outdoor elements."

“We are introducing them gradually to the bay in little steps, but seeing them swim together and deep dive amongst the flora and fauna of the wider bay for the first time was amazing to witness and gave us a real sense that Little Grey and Little White are enjoying being back in the sea."

You can watch the full video of their first swim above.

Little White and Little Grey have a while to go before they can be fully released into the sanctuary but, if their current progress is anything to go by, they'll be back swimming freely in no time. For more on the devastating treatment of our marine animals, keep scrolling...