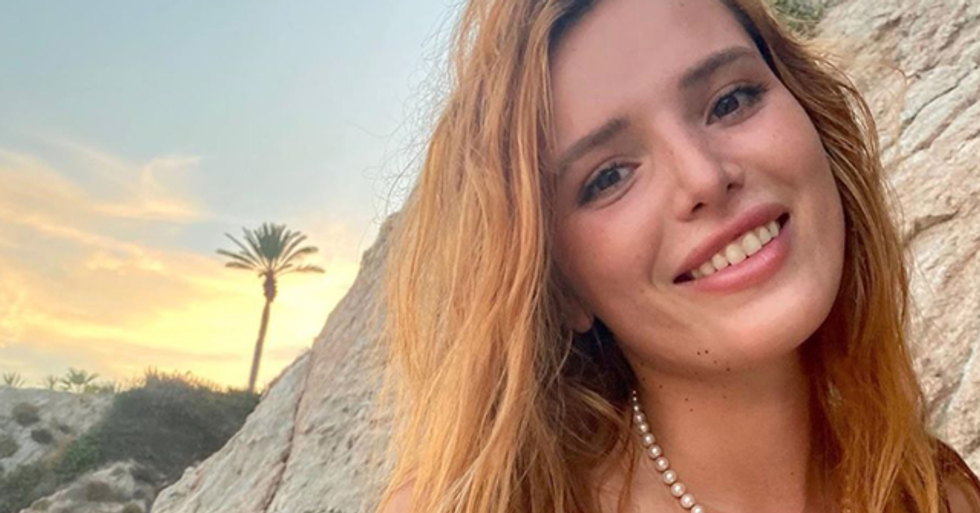 Bella Thorne has officially joined OnlyFans, but it turns out that her fans were a little too excited to get a glimpse of her x-rated content...

Once again, folks, Bella Thorne is dominating the headlines...

And this time, it's all regarding her eagerly-anticipated OnlyFans account.

Yep, the former Disney star is officially on the x-rated social media site.

And, as a result of her history with adult content, Bella's OnlyFans account has been a long time coming.

But it turns out that people were very excited about the prospect of her account...

Because the first picture she posted crashed the full site.

And, going by her first post, it's no wonder why.

Now, it's no secret that Bella Thorne has led a somewhat unconventional life.

The star was in front of the camera from just 6 weeks old, where she appeared as a child model for over thirty commercials for brands such as Neutrogena and Texas Instruments.

But it wasn't until 2010 when she was really catapulted to stardom...

Her role as Cece Jones in Disney Channel's Shake It Up changed everything for the young star.

The show followed 2 Chicago teens as they try and fulfill their dream of becoming professional dancers.

But we all know how the story goes...

There's no denying that a whole array of child and teen stars tend to go off the rails - take Amanda Bynes, for example.

At face value, Bella seemed to be handling everything pretty well...

But little did we know that she was struggling behind the scenes with everything that a normal teen struggles with: her identity, her family, and maintaining relationships.

Bella has been no stranger to drama in the past...

She is known for her lack of embarrassment and for posting about personal and explicit aspects of her life on her social media.

In fact, she exposed all of her struggles in her book last year...

The book aimed to give fans an insight into her mindset while she transitioned from the young, sweet Disney star that everyone wanted her to be, to Hollywood’s wild-child.

Bella openly talks about the things that people would typically try and conceal, like how it feels growing up in a family feeling unloved...

As well as the pressures having to pin down your identity at a young age.

With fame comes constant scrutiny, and despite being open and honest in her book, it didn't stop the press poking even further into her personal life.

One of the main aspects of her life the star frequently hit the headlines for was her relationships.

Bella has always been open about her dating history and love life.

She has had somewhat of a pretty chaotic dating history...

With a list of ex-partners ranging from pretty boys to bad boys. She has had both serious relationships and month-long flings with partners such as Charlie Puth, Gregg Sulkin, and Tyler Posey.

So, when she ventured into the adult film industry, most of us weren't too shocked.

Last year, Bella directed her debut adult movie, Her & Him.

The BDSM-themed flick’s synopsis says the story revolves around an "edgy twenty-something guy who stumbles upon a surprise text in his girlfriend's phone, interrupting their morning routine and spinning everything into an out-of-control sexually charged encounter."

On her inspiration for the movie, Bella explained:

“What inspired me to make the movie was basically thinking about this relationship between a male and a female, and this fight over dominance and how much that relates to us in our general world besides in a sexual scenario."

She had some stern words for those who were "uncomfortable" with the notion of pornography.

Speaking candidly in an interview, she said: "Well, the process of shooting was quite interesting because we had real-life f*****g on set, which I have never shot before. Also, this was my first short in general, so it was quite an interesting experience to have the first thing that I really fully directed have so much sex in it."

But, despite the vast majority of people being unimpressed with the "vulgar" movie...

One of the leading adult content sites loved it and even awarded her their Vision Award for her directorial work on the movie.

Evidently, Bella has enjoyed her time in this industry...

And it has clearly given her the confidence to start shooting her own content.

Because, this week, she revealed that she had joined OnlyFans.

The site, which has boomed in popularity in the last few months, allows content creators - to post content and receive payment directly from their followers, or "fans" via subscriptions or one-off tips.

A whole array of celebrities and influencers have joined the site...

Including Blac Chyna, Cardi B, and Tana Mongeau.

And now, Bella is the latest to join this list...

And she is claiming that it is her way to "fully control her image."

Yep, it turns out there's a deeper meaning behind the account.

She told Paper magazine: "OnlyFans is the first platform where I can fully control my image; without censorship, without judgement, and without being bullied online for being me."

She is charging $20 per month for her exclusive content...

$60 for 3 months, and $102 for 6 months. A press release for her newest venture claims that "safe estimates [earn] Bella will earn $1 million a month."

Bella has a huge fan base already...

So much so, that OnlyFans temporarily crashed when people rushed to take a look at her first picture.

The actress can be seen posing in a bikini wearing a choker necklace that spells out the word "s*x." Classy.

It's needless to say that the star will make a fortune off her latest venture...