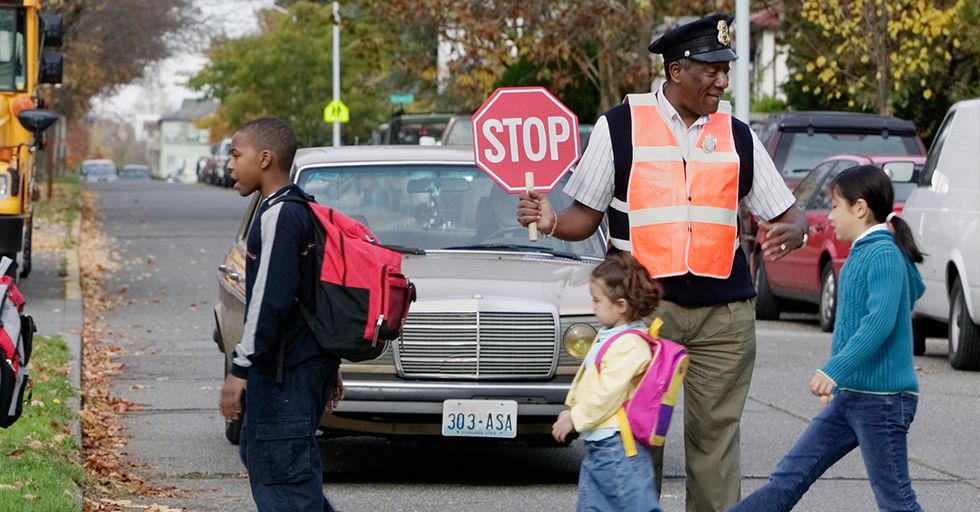 After A Hard Month, Beloved Crossing Guard Gets A Heartfelt Surprise From Community

Every community has its staples, people who keep things working – even if you don't notice. We know why a community needs police, teachers, and things like that. But how often do you think about the other people that make a community what it is?

As it turns out, the people of Winston-Salem, North Carolina, think about them a lot! It's great when everything is going well, but it's when something goes wrong that we see the true goodness in people. And when a beloved member of the Winston-Salem community went through a rough patch, the rest pulled through for him.

Check out the adorable outpouring of love for this Winston-Salem crossing guard. It's sure to warm your cold, cold heart and keep you smiling for the rest of the day!

Around street crossings, construction sites, and in some cases, directing traffic around a school building.

It becomes a routine thing.

Even when you see crossing guards every other day, you think more about the directions you're given than what goes into the crossing guard's actual job.

When you think about it, they're very important.

Nobody wants to be in a traffic collision, but driving conditions can hamper that goal. Crossing guards make sure everyone goes where they need to safely.

Winston-Salem, NC, knows this better than anyone.

And this community knows one crossing guard very well; they see him every day when driving their kids to school.

"He's looking out for everybody. The kids, the parents, the cars. He doesn't miss a beat," one mother said, singing his praises.

There's a mutual caring between Mr. Peoples and his town.

And because Mr. Peoples takes such good care of them, the people of Winston-Salem do their best to take care of him, too.

That means they notice things.

"You can tell he loves what he does. He's such a wonderful man. And when he's missing, everyone knows it," another mother said.

When you think about it, that itself is pretty special.

Outside of close friends and family, how often do you notice, or really think about the small absences 0r inconsistencies of people around you?

Mr. Peoples had one difficult month.

Between his car breaking down and spending Christmas Eve, of all nights, in the hospital, Mr. Peoples was unable to come to work for much of last month.

So, of course, people noticed.

And the school staff, parents, and students all wanted to do something to help Mr. Peoples through his hardships.

One mother issued a call to action.

Sloane Johnson began spreading word of Mr. Peoples and his troubles on Facebook, hoping that more people besides herself would want to help.

She was right! Before long, the community had been mobilized to help Mr. Peoples.

Johnson was blown away.

"In the span of two hours, we were at $800 raised and a car donated by another parent," she told Stitch.

Can you imagine how much love the community has for Mr. Peoples, to jump so quickly at the chance to help him out?

"They showed me so much love," he told Stitch. "And I don't take it lightly because love is not easy to come by."

How sweet is that?!

I'm not crying, you're crying.

Mr. Peoples is certainly glad to know that the community cares.

"Now I really, really know that they care. And it's good to know that people care about you," he added.

And it seems like that car is working great!

It's crazy (and wonderful) that someone in the community loves Mr. Peoples so much they donated a car as soon as they heard about his troubles!

How's that for their good deed for the day!

We'll often hear little quips like that, encouraging us to do a good thing a day for someone else. And this community definitely knows how to do a good deed!

It's pretty inspirational, too.

If everyone thought like this – saw a deserving person in need, and rallied together to fulfill that need – wouldn't the world be so much happier?

Even when you're short on money, when you don't have a spare car to donate (I know I don't!), it's always possible to have a kind word for somebody else.

The rest of the internet is impressed.

It's a good story to pull up when you're feeling too cynical.

Mr. Peoples is a diamond in the rough.

Apparently crossing guards like him don't come along every day. The Winston-Salem community is lucky to have him!

Another person familiar with the job agrees.

Two crossing guards who love their kids. How cute is that?

And Mr. Peoples' words struck a chord with people.

Wise words from a great guy.

Everyone is wishing Winston-Salem the best.

And some people were just kinda...crying.

Same, though! Something about seeing a person cry in happiness makes the rest of us want to do it too.

Check out the Stitch story:

If that's not wholesome as heck, I don't know what is!

Do it for him.

Next time you see someone who could use some support or cheer up, think of Mr. Peoples and step up! Keep the love going, and share this heartwarming story with your friends!