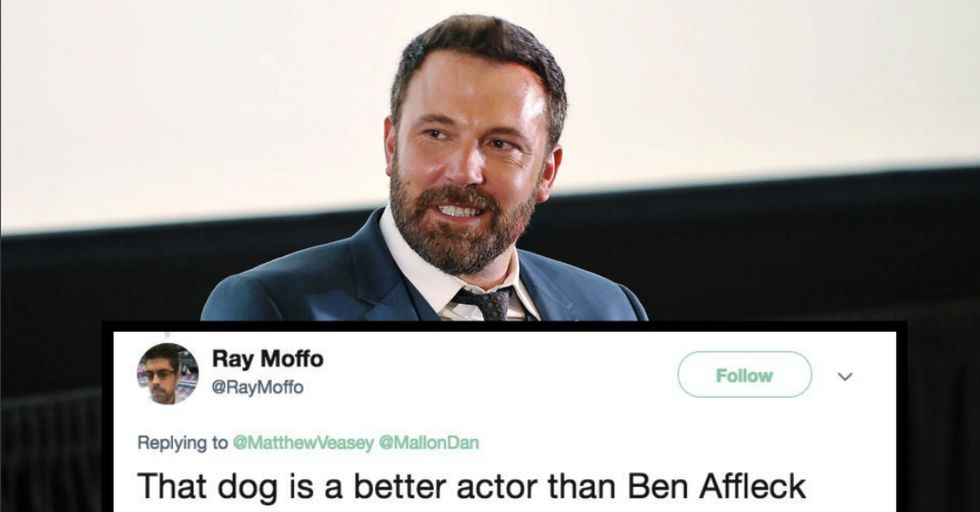 Ben Affleck Just Rescued a Stray Dog, but Was It Nothing More Than a Cheap Publicity Stunt?

When your friend or colleague is outed as someone who has been a monster who sexually harasses women for years, you have a few options when it comes to what you should do next. You can (correctly) assume that they are no longer worth your time and cut ties with them. You can share your disapproval for their actions and make it clear that you believe and support the victims.

Or, you can adopt a dog and hope to distract people from the fact that you have been an enabler for that individual's appalling behaviors.

That's what Ben Affleck appears to have done!

Last week, actor Ben Affleck was photographed out on the town with his new dog.

Apparently, the dog used to be a stray, and Affleck chose to adopt it. There's no word on the name yet, but we're going to refer to the dog from here on out as "Puplicity Stunt."

First of all, are we sure Ben Affleck knows how dogs work?

That is not how you hold a dog. Look at that poor dog's face. That dog is not OK.

Secondly, does Affleck seriously think we've all forgotten about the fact that he has enabled Harvey Weinstein for years?

'Cause guess what. We super didn't. Ben Affleck knew that Harvey Weinstein was sexually harassing and assaulting women. His silence on the matter — for years — makes him complicit in Weinstein's deplorable actions. And don't forget: Affleck himself once groped a woman during a television interview.

Rather than praising the man for adopting a dog, we should really focus on not letting his own actions be swept under the rug.

Actress Rose McGowan has butted heads with Affleck ever since the allegations of Harvey Weinstein sexually harassing and assaulting women came to light earlier this month. She even tweeted her own proof that Affleck was aware of the assault that was going on.

Anyone can adopt a stray dog. It takes a truly special person to enable monsters like Harvey Weinstein.