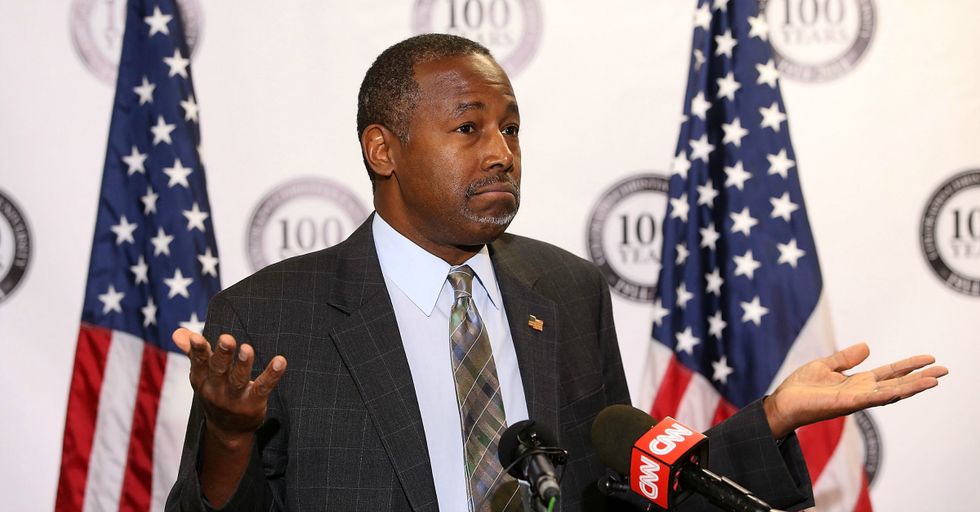 Remember Ben Carson? It's probably been awhile since you've seen his name making headlines. Back when he was running for president, we all laughed about his ridiculous claims that Joseph built the pyramids to store grain because that is hilarious. But it didn't take long for everyone to realize that this Ben Carson guy was...maybe not the best person. Like when he claimed that prison makes people turn gay. Or when he claimed that the idea of increased gun control was more devastating than any dead body he'd ever seen.

In light of the ongoing controversy surrounding President Trump and the botched phone call he made to a military widow, Ben Carson has once again proved that he's not exactly someone we should be going to for moral guidance.

In case you missed it, Donald Trump messed up during a very important call last week. While speaking to Myeshia Johnson, whose husband La David was killed in Niger, Trump appeared to not know her husband's name. He also said her husband "must've known what he signed up for."

Many people were outraged that the president could be so unnecessarily glib and out-of-touch. Trump, of course, did not apologize for his actions. Instead, he denied them on Twitter. Classy.

Myeshia Johnson, meanwhile, confirmed that Trump had forgotten her husband's name, and had also said La David must've known what he signed up for.

Trump still continues to deny the phone call went down that way, saying that he has one of the "great memories of all time," and therefore could not possibly have forgotten La David's name.

Now, Ben Carson has stepped in to defend the president.

He claims that Trump just has a bunch of haters who are actively looking for things to complain about. He also said that if Trump had said "it's a dark day," people would have cried racism.

No, Ben. Nobody would have said that. And if people had, they would have been wrong. But that's not what's happening, here. Trump did something bad, and people are rightfully calling him out on it. Maybe the president does have haters who spend all their time looking for things to complain about. But here's the thing: It's not hard to find them. And that's the real problem.