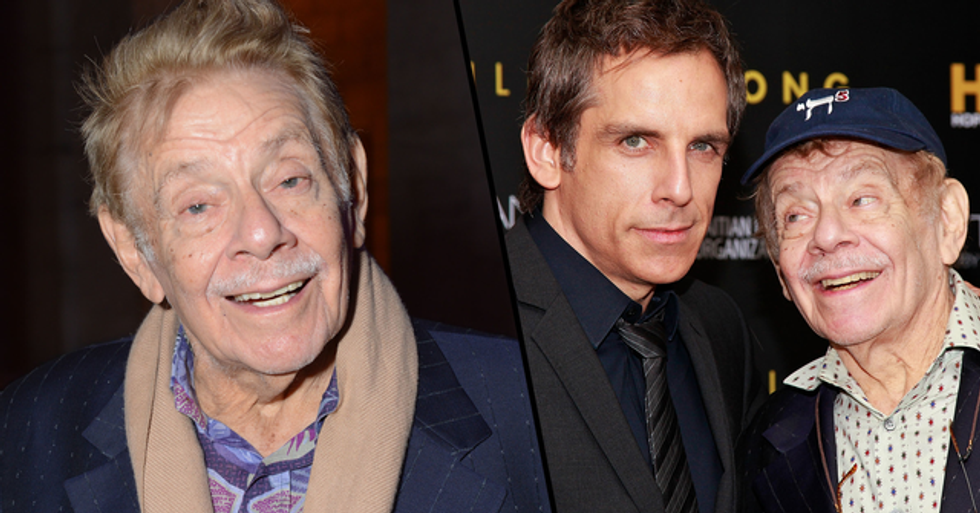 Today, the devastating news broke of the death of actor and comedian, Jerry Stiller.

His son, Ben Stiller, was the one to break the news with a touching, yet heartbreaking tribute to his father.

Keep scrolling to read about the incredible life that Jerry had led, and to read Ben's moving tribute for yourself...

At the age of ninety-two, the much-loved actor and comedian, Jerry Stiller, has sadly passed away.

Jerry lived quite the life.

Upon graduating from high school, the Brooklyn-born Jerry served briefly in the U.S military during the Second World War. But his real passions laid within the arts.

Upon his return from service, he went on to pursue his love for acting...

Thus achieving a degree in Speech and Drama in the 1950s.

And, little did he know, he was to become one of the most recognizable comedy actors of our time.

But before that, Jerry met his wife-to-be, Anne Meara.

Anne was upset about not having been given a part, so Jerry took her out for a coffee - which was all he could afford at the time - to cheer her up.

Jerry and Anne wed just one year later and went on to have 2 children together - Ben and Amy Stiller, who have, themselves, accomplished successful careers in the world of acting. And, heartwarmingly, they remained together until Anne's death in 2015.

The pair had been joint at the hip for sixty-two-years.

"I miss her," Jerry had once said on the passing of his wife. "There were no walls between us in any way. We both knew what the other was thinking even when we weren't listening."

And they were so much more than just husband and wife.

At the start of their relationship, and after much persuasion on his part, the couple started doing comedy performances together across New York.

The comedy team, Stiller and Meara was a roaring success across the 1970s...

And, together, they made numerous appearances on television variety programs, comedy sketch shows, and radio commercials.

But most of us will probably recognize Jerry best from the hit sitcom, Seinfield.

Jerry played the role of George Costanzas' father, Frank, on the NBC sitcom.

Jerry played the much-loved role of Frank for 5 years...

And he also went on to play Arthur Spooner on the CBS comedy series The King of Queens.

Jerry went on to appear in a number of other hit blockbusters over the years...

His career also saw him appear in Heavyweights, Hot Pursuit, and The Heartbreak Kid.

And he even co-starred alongside his son, Ben.

Jerry played the role of fashion agent, Maury Ballstein in the Zoolander franchise.

Ben was Jerry and Anne's only son.

And, alongside his sister, Amy, he shared an incredibly close relationship with his father.

So, this is undeniably an incredibly difficult time for the actor.

Since the news of Jerry's death broke, celebrities and fans alike have been sending their condolences to Ben.

Others have been messaging the actor with their own stories of his parents...

@RedHourBen I spent a wonderful evening with your mum and dad. They were protective of me and so funny. It was a ni… https://t.co/fpuB6XyoVp
— Jane Kennedy (@Jane Kennedy)1589187292.0

Australian radio host, Jane Kennedy, wrote: "I spent a wonderful evening with your mum and dad. They were protective of me and so funny. It was a night I will never forget."

And one Twitter user shared this incredible throwback picture...

@RedHourBen And time marches on for us all. Condolences Ben to your family. He'll be fondly remembered always. https://t.co/QJGfaEEplo
— Ozesurfer (@Ozesurfer)1589187942.0

Which shows Ben as a child with his dad who, might I add, barely aged up until his death.

So it was only right that he was the one to break the heartbreaking news of his death.

He wrote: "I’m sad to say that my father, Jerry Stiller, passed away from natural causes. He was a great dad and grandfather, and the most dedicated husband to Anne for about 62 years. He will be greatly missed. Love you Dad."

Our thoughts go out to Ben, Amy, and the rest of their family.