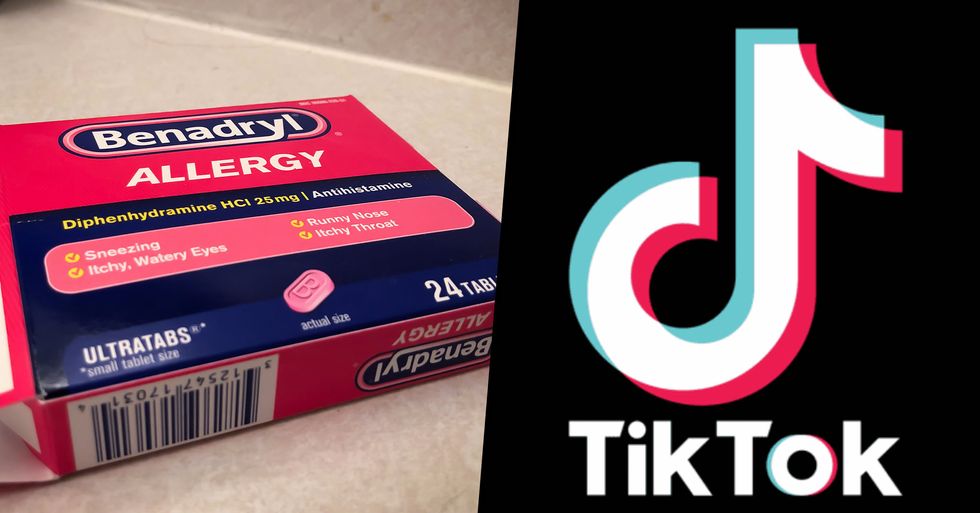 It's clear that these challenges aren't for the weak-hearted. But one that has recently taken the internet by storm looks potentially even more hazardous than the rest - and it's left 3 teens in hospital already.

Yep - it was as treacherous as it sounds!

And it involved kicking inwards at an unsuspecting person as they jump up in the air so they fall onto the back of their heads.

This seemed to be the start of TikTok's most dangerous challenges.

And this isn't the only TikTok challenge to land teens in the emergency room.

In fact, the latest trend might just be the most dangerous yet.

So far, 3 Texas teens have been hospitalized - and it's reported 1 has even died.

All in the hopes of making some good TikTok content.

It involves taking an inordinate amount of the allergy medication, Benadryl.

Well, it can supposedly cause hallucinations, which teens find funny when captured on film.

14-year-old Rebekah was hospitalized after attempting the challenge.

She had a heightened heart rate and was speaking in fractured sentences.

A nurse practitioner at Cook Children’s Medical Center commented on the influx of teens.

"What struck me was that we had 3 teens come in for the same thing in one week. None of these patients were trying to harm themselves. They all said they saw videos on TikTok and were curious to try it," Amber Jewison shared.

The AAPCC issued a warning.

A TikTok Benadryl challenge has caused some teens to overdose. #Preventpoison by calling your local poison center a… https://t.co/E7VWutlbM9
— AAPCC (@AAPCC)1595941201.0

Risking your life just isn't worth it - no matter the quality of content you'll create!

And now Benadryl has spoken out on the challenge.

Johnson & Johnson have said, "The BENADRYL TikTok trend is extremely concerning, dangerous and should be stopped immediately."

"As with any medicine, abuse or misuse can lead to serious side effects with potentially long-lasting consequences, and BENADRYL products should only be used as directed by the label."

"It is our strong recommendation that all medications be kept out of the reach of children at all times."

"We are working with TikTok and our partners to do what we can to stop this dangerous trend."

"Including the removal of content across social platforms that showcase this behavior."

Scroll on for the bottlecap challenges, and Steve-O's ... unique take on it.