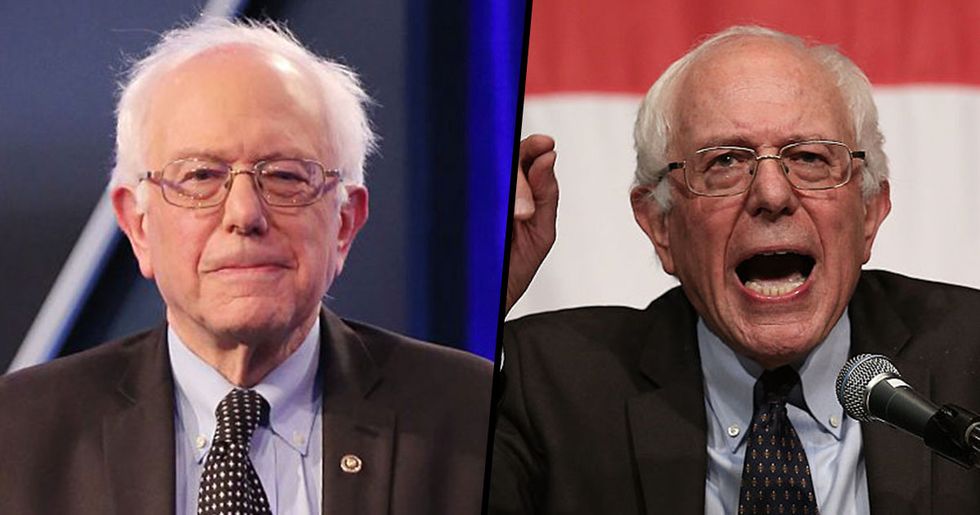 Bernie Sanders Says He Will Cancel All $1.6 Trillion of Student Loan Debt

I'm just going to say it, the only thing that politicians ever seem to "deliver" to us is a bunch of lies. I think I've grown numb to these wild promises that constantly come out of their mouths. But, recently, one of them managed to catch my eye and, for a second, I found myself nodding along to what I was hearing.

Bernie Sanders, the Democratic presidential candidate for 2020, is planning to cancel all $1.6 trillion of US student loan debt. Sounds impossible, right? But, apparently, he's a man with a plan. Here's everything you need to know about this new proposal.

Bernie Sanders has made an announcement that shocked the nation.

Sanders, a Senator from Vermont, has pledged to scrap all $1.6 trillion of US student loan debt. As first reported by the Washington Post, he announced that he has a plan in place to help accommodate his promise.

We're finding it a bit difficult to believe you here, Bernie.

How can one just completely cancel over 1 trillion dollars worth of debt? If it was that easy, every other politician would have promised the same exact thing by now, surely. And Sanders hasn't been the most reliable Senator in the past. He has been caught out before for making "false statements."

According to "Politifact," Bernie has already made some pretty wild statements.

"Politifact" has been keeping a record of all the false statements that Sanders has made in the past... and there are quite a few.

"Not one Republican has the guts to recognize that climate change is real."

Okay, so I know Donald Trump would rather just ignore the fact that the Earth is being destroyed by global warming, but not all Republicans have claimed this. Even when Sanders had the chance to clarify his definitive statement, by targeting it towards the candidates running for President, he chose to stick with his original comment.

But the polls managed to prove him wrong and it was slightly embarrassing, to say the least.

"Politifacts" stated: "If he [Sanders] was referring to party supporters in general, a 2013 Pew poll found that 23 percent of people who lean Republican say there is solid evidence that Earth is warming and human activity is responsible. And a 2013 bipartisan poll found that 53 percent of Republican voters under age 35 picked either 'crazy,' 'ignorant' or 'out of touch' to describe someone who denies that climate change is happening." So sorry, Bernie, that rumor is going to remain a rumor unless you want to try re-phrasing it.

He also said: "We spend twice as much per capita on health care as any other nation on Earth."

Pretty bold claim there. This one was a bit of a tricky one because it's almost true, but not in the way that Sanders phrased it. Figures from The World Health Statistics (2009) show that the US is in the top 5 nations when it comes to spending money on healthcare, but it is nothing close to double other countries' spending as Luxenberg and Monaco spend over 6 thousand dollars per capita just like the US.

So, again, Bernie should have refined his claims.

"Sanders would have been on completely firm ground had he simply said, 'We spend more per capita on health care than any other nation on Earth.' But instead, he said 'twice as much.' And for that reason, we [Politifact] rate his statement false."

Bernie Sanders' previous exaggerated comments are one of the reasons that people are having a hard time believing him this time round.

There are many more statements like this one recorded on the website. Maybe this is one of the reasons that people are having a hard time believing in his new policy. That, and it also just sounds too good to be true. If there was an economically stable way to do this, why haven't other politicians tried it already?

But, despite all of our questions, Sanders is pushing on with this ambitious idea. Here's exactly how he plans on "forgiving" students and their debt.

In 2016, he introduced a legislation - the "College For All Act" - that would make public colleges free for students. He managed to rack up a couple of extra voters with this policy, but it still wasn't enough to progress further. However, now Bernie is cranking it up a notch.

So who's paying for it?

The biggest concern for this new policy is who's going to be funding it? One trillion dollars isn't pocket change that can just be acquired, but, according to Sanders, he's got a new tax plan on financial transactions. This tax plan is supposed to raise more than 2 trillion dollars over the next 10 years, by implementing fees on stock trades.

Here's what Sanders tweeted about the issue:

If we could bail out Wall Street, we sure as hell can #CancelStudentDebt.
— Bernie Sanders (@Bernie Sanders)1561384016.0

He said that if we could "bail out" Wall Street, then we could easily "#CancelStudentDebt." This tweet has received over thirteen thousand likes since it was posted. A lot of people seem to be on board with this idea, expressing how student debt wrecks their lives. It's obvious that Sanders is going to receive a huge amount of support for this pledge, from students and from parents of students alike.

However, some people have come to rain on Bernie's parade, claiming that the idea is too ambitious.

And they might be right. Other presidential candidates, including President Donald Trump and Senator Kamala Harris, have made pledges within the education sector to appeal to a wider audience, but Sanders' promise, by far, has been the wildest. The last thing that the country wants is to see themselves in another economic crisis.

This Twitter-user explained how the country didn't lose any money bailing out Wall Street.

Whereas, if this policy was to go ahead, the money would not be in any process of being paid back. The country would just have to find ways of raising enough money to cover the original student debt, and that would require doing more than just raising a few taxes.

He then goes on to explain how other kinds of debts make more sense to cancel.

He has a point, but others are arguing that Wall Street was careless and got themselves into their financial mess whereas all students wanted was to educate themselves, but, instead, they end up prisoners of student debt. That's why it makes more sense to help them.

All in all, it's a risky promise to make, but the benefits sound extremely appealing.

No doubt, with a policy like this, Sanders is going to gain some attention, but with that attention comes pressure. If he does not manage to pull through on this promise, or if the general public manages to find cracks in his plan, it will most definitely ruin all of the credibility he has left as a politician. I wonder if it'll all be worth it in the end...