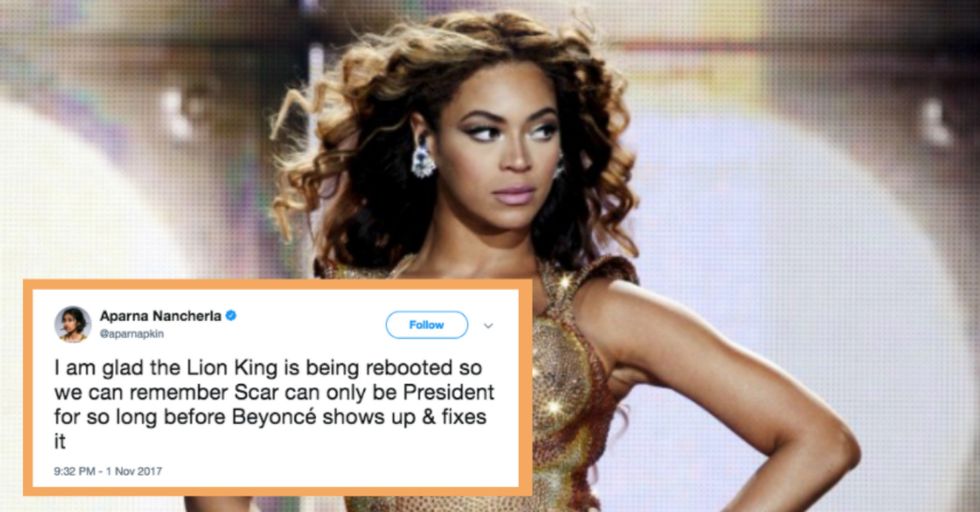 Besides Beyoncé, Here Are the Other Big Names in the Exciting New 'Lion King'

It's happening, people. There's going to be a new Lion King movie. In theaters. In 2019. They hype is very, very real.

Yesterday, Disney announced the star-studded cast, and boy oh boy is it ever amazing.

Beyoncé could literally play the letter "L" from the movie poster and still be the star of the show. We can't wait to hear her voice singing "Can You Feel the Love Tonight?" Obviously, Nala needs a Simba. That character was also perfectly cast.

We're going to be seeing even more of the Atlanta creator and star in the next couple of years. He's playing Lando Calrissian in Solo: A Star Wars Story in 2017, then he'll go on to voice Simba in The Lion King.

If you're a musical fan, you might recognize Shahadi Wright Joseph as Little Inez Stubbs from Hairspray Live! If you haven't yet heard her sing "Breathe" from In The Heights, you're missing out.

This isn't McCrary's first project with Donald Glover. The 9-year-old singer and actor also appeared in the track "Terrified" on Childish Gambino's album Awaken, My Love! Now the two are playing the same character at different ages. Go figure!

That's right, Jones is reprising one of his all-time greatest roles. It's impossible to imagine anyone else voicing Mufasa, right? Thank goodness we don't have to. That's one of Simba's parents, but what about Sarabi?

Sarabi (Simba's mom) will be voiced by actress Alfre Woodard, who has held previous roles in 12 Years a Slave, Captain America: Civil War, and the Netflix version of A Series of Unfortunate Events.

Ejiofor played the lead role of Solomon Northrup in 12 Years a Slave, for which he received an Academy Award nomination. He also appeared in The Martian and Doctor Strange.

Last Week Tonight host John Oliver basically is Zazu, except for the whole "being a bird" thing. Yet another perfect match.

Considering that Eichner's previous roles have almost exclusively been shouty and smarmy, casting him as Timon was a great move. Now we're just wondering if he and Rogen are eating any bugs to prepare for the role. What about everyone's favorite wise (if slightly unhinged) mandrill?

John Kani will play the mandrill Rafiki. The South African actor has already appeared in Captain America: Civil War and will also be in next year's Black Panther as King T'Chaka. Now, he'll be providing Simba with the much-needed wisdom and bonks to the head.

Shenzi is one of the three speaking hyena characters. In the original film, she was played by Whoopi Goldberg. Kasumba is a German actress who has appeared in both Captain America: Civil War and Wonder Woman.

The other two hyenas from the film (Ed and Bonzai) have been renamed for the new Lion King movie. Bonzai is now Kamari and will be played by the Key half of Key and Peele.

In the original film, Azizi was named Ed. You probably remember him better as the goofiest hyena who didn't do much talking. We can't wait to see how Kasumba, Key, and André play off each other in the new film. Is it 2019 yet?!