All the Best Celebrity Halloween Costumes of 2018 | 22 Words 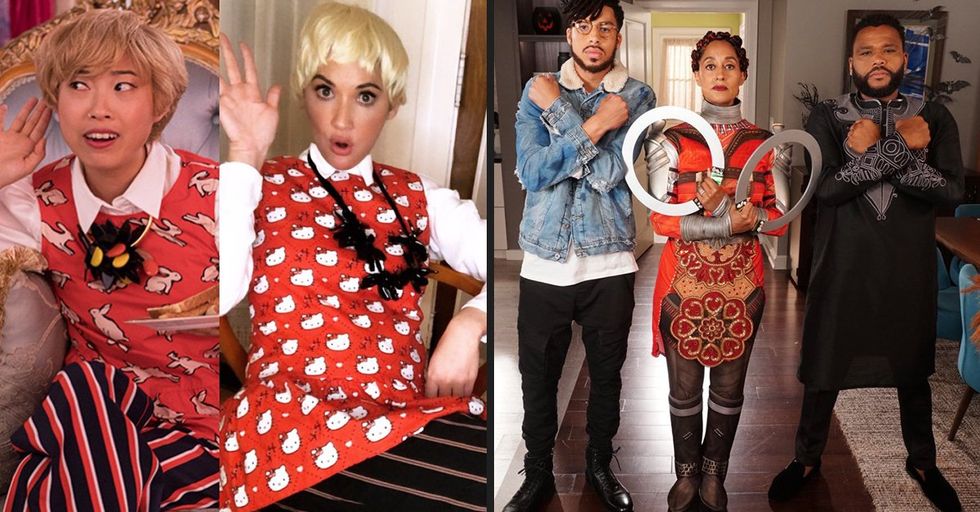 All the Best Celebrity Halloween Costumes of 2018

Halloween is a time for everyone to show off their creativity or show some skin, sometimes both. When it comes to Hollywood, these actors and artists usually pull out their best tricks. A lot of celebrities brought out their A-game with their costumes, make-up, and accessories for Halloween 2018. From silly to spooky to sexy, there was a little bit of everything on our Instagram feed this holiday season.

Even some of our favorite celebrity couples showed up with hilarious partner costumes (including Joe Jonas wearing a dress), and it was something you have to see to believe. Of course, they have a little bit of extra dough when it comes to designing and creating their costumes, so some of their outfits are quite ornate *cough Harry Styles* but it's always a good time to see what they choose to dress up as.

Your favorite celebrities, some pretty creative outfits, and a few adorable couple costumes mean only one thing; celebrity Halloween season is upon us.

Olivia crushed this Goh Peik Lin costume. Her Crazy, Rich Asian inspiration impressed us. Plus, who doesn't love a shoutout to one of the best films of the year?

Harvey Dent and 2 Face? He makes the bad guy look so good. Whoever made his suit is also crazy talented.

If anyone else tried to redo this costume, they'd look a hot mess. G-Eazy is all hot and no mess.

Kendall and her friend went as Fembot and Austin Powers, and it was groovy. The wig is probably the best part, but she pulled off the whole look because she's Kendall Jenner.

Singer Justine Skye completed the group when she dressed as Foxy Cleopatra. They're only missing Dr. Evil. I would love to see Kris Jenner in a bald cap, anyone else?

Halsey went as Poison Ivy. Is it a coincidence that her and G-Eazy (who recently separated) were both Batman characters? It seems like their hearts (and their creative minds) are still connected.

Congratulations Rita, you went all psycho and crushed this Halloween costume. Even down to the tattoos, Rita is almost the exact replica of Post Malone.

What do we call her? Post Ora? Rita Malone? Rita went on stage and sung her new single while wearing her full on Post attire. Hearing Rita's amazing voice come out of Post Malone's body is confusing and hilarious. It's safe to say the audience was about to fall apart from amazement.

I'm obsessed, and a little scared by this one. It's simple yet intricate; anyone could recreate this costume. All you need is some paint and a steady hand!

Don't be Karen from "Mean Girls" and paint yourself in the mirror. Get a friend who cares enough to do it for you, so you don't end up with a backward Ouija board on your chest.

Paris might be the only human in the world to make a Furby look sexy. Right down to the butterfly boots, she is made for this outfit. She posted a few more pictures on her Instagram and said that Furby was her "spirit animal" and I think she is correct.

Miguel and his fiancé Nazanin Mandi rocked their Pirates of the Carribean costume. Miguel even has that crazy, rum-drunk look in his eyes. Very impressive.

Another example of celebrities dressing as other celebrities, singer Mahalia remade a "SZA" look that became pretty iconic because of the neon wig. You know what they say, imitation is the highest form of flattery!

Harry went as Elton John when he wore a bedazzled Dodgers jersey on stage to perform at the Dodgers stadium in 1975. Elton was flattered by Harry's costume and even posted it on his own Instagram page.

Although the Dodgers lost the world series, hopefully, Harry sporting a sparkly uniform brought some joy back into their saddened hearts.

Is this what true love looks like? Sarah and Wells went as Taco Belle, a combination of the fast food chain and the Disney princess. I wonder if they fought over who got to be Belle and who got to be the Taco?

They are the ultimate power couple, in and out of their costume.

Marcus Scribner, Tracee Ellis Ross, and Anthony Anderson all channeled their inner Wakanda warrior when they dressed up as the cast of Black Panther. This might be my favorite costume of all time.

These three talented ladies dressed as the witches from Hocus Pocus and they mesmerized the whole crowd as they sung "I Put a Spell on You" at the Hocus Pocus 25th Anniversary Halloween Bash.

These witches can sing

Here's the whole performance and let me say, it is the most magical thing I've ever seen.

Nina's creative spirit shines through with her A Star Is Born costume. Because if a star is born, it's a baby star, hence Nina's diaper and pacifier. That's one way to show your true dedication to a movie.

Nina and her dog

She also had a second Halloween costume where her and her dog dressed as adorable unicorns. This might be the cutest couples costume ever.

This Pamela Anderson and Kid Rock costume is the throwback we all needed.

Gabrielle no doubt nailed her Gwen Stefani costume that she wore to her husband, Dwayne Wade's 90s themed Halloween party. She pulls off the blonde hair and plaid pants almost better than Gwen.

Ryan and his model girlfriend Shayna dressed as Chanel designer Karl Lagerfeld and Vogue editor Anna Wintour. Well, now we know if Ryan ever gets white hair, he is still going to look amazing.

Ryan, Kelly Ripa and her husband Mark Consuelos dressed as the cast of I Love Lucy, but in this version, they are playing Fort Nite. It brought laughs to all different generations.

Nikki and Brie showed up as the twins from The Shining and made a pretty creepy cameo on The Tonight Show with Jimmy Fallon. In classic Fallon matter, it was silly and hilarious, and the three of them ended up playing beer pong. Talk about an ideal Halloween party.

Who wore it better? I never imaged I'd be seeing one of the N*SYNC members in a dress, but it's 2018 and anything is possible.

This is the definition of Halloween couple goals. Sophie is an elephant, and Joe is Sansa Stark from "Game of Thrones." Oh boy, he looks great in a dress.

This video is necessary in order to feel the full effect of his costume.

No one pulls off glitter more than Jenna. That's one beautiful unicorn!

JWoww had a Moana family themed costume, and it is the cutest thing we've ever seen. In spite of recent relationship drama with her estranged husband Roger Matthews, the family came together to nail this family costume, and their cute daughter Meilani made one adorable princess of the sea.

Talk about the ultimate bromance. Wolverine and Gaston would make an interesting team. Could you imagine a future movie crossover?

Me-owww. Who knew leopard print would look so good on these guys? I'm a big fan of their boldness with their costume choice. It takes a real man to wear a choker.

These two dressed as beautiful butterflies, and it's safe to say the internet's obsession with Stormi just keeps growing.

The cutest princess and prince charming pair to ever grace our eyes.

Celebs do it best

There you have it folks, some of the best celebrity Halloween costumes. I hope this inspired you to be super extra. Share these iconic pictures with friends to get some ideas and share in the beauty.